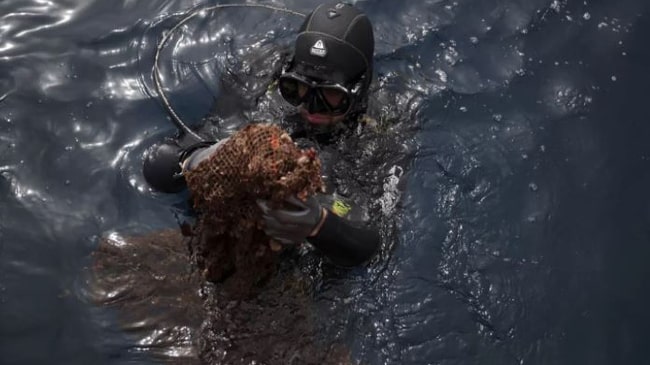 Derelict fishing gear, sometimes referred to as “ghost gear”, is any discarded, lost or abandoned fishing equipment in the marine environment. The gear traps and entangles animals and potentially kills sea life.

“We don’t know where the nets came from. Once the nets are abandoned it continues to catch fish and gets wrapped up in kelp,” she said.

According to the National Oceanic and Atmospheric Administration, nets or traps and pots are among the main types of debris impacting on the marine environment today.

“It was hard work to remove it by hand from an area that is inaccessible to vehicles, but with a lot of elbow grease we were able to get it off the beach and take it to an appropriate waste disposal site,” Shark Spotters said.

A recent Greenpeace report found that an estimated 640 000 tons of ghost gear enters the ocean every year – equivalent in weight to more than 50 000 double decker buses.

“Ghost gear makes up an estimated 10% of the plastic waste in our oceans, but represents a much higher proportion of large plastics found floating at the surface. Associated rubbish from fisheries also contributes to pollution.

“In some ocean areas, fishing gear makes up the vast majority of plastic found there, including over 85% of the rubbish on the sea floor on certain sea mounts and ocean ridges, and of the larger pieces of plastic in the Great Pacific Gyre,” Shark Spotters found.

Earlier this year, 15 fisheries and research projects around the world, including WWF South Africa and Birdlife South Africa, received funding from the Marine Stewardship Council Ocean Stewardship fund, with a focus on reducing impacts on threatened species and tackling ghost gear.