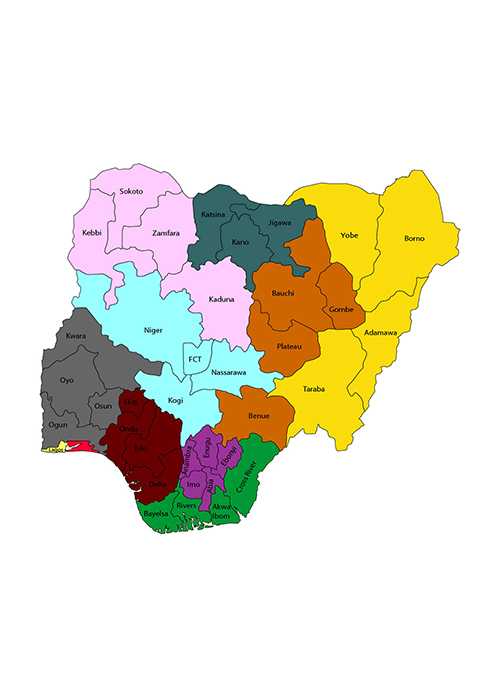 Nigeria FlagThe Federal Republic of Nigeria is bordered by Benin, Chad, Cameroon, and Niger and has a coastline of 853 km which borders the Atlantic Ocean in the Gulf of Guinea. The limits of Nigeria’s territorial waters and Exclusive Economic Zone (EEZ) are 12 nautical miles (nm) and 200 nm respectively.

The total area of the continental shelf in the EEZ is approximately 37 900 km² (FAO, 2007) but the flats are interrupted coast-wide by unburied fossil corals at 40-120 m depth. Canyons off Lagos, Mahin and Calabar also interrupt the shelf. Apart from these interruptions and some off shore oil prospecting installations the shelf is considerably trawlable (Ogbonna, 2001).

Nigeria is the largest country in Africa, having a population of about 140 million people. Nigeria’s population is made up of about 200 ethnic groups and 500 indigenous languages. (WorldBank, 2006). On October 1, 1960, Nigeria gained its independence from the United Kingdom, and now consists of 36 states and the Federal Capital Territory. The States along the coast are: Akwa Ibom State, Bayelsa State, Cross River State, Delta state, Lagos State, Ogun State, Ondo State, and Rivers State. (Annex 1)

Output of the fishing industry is very important economically. Although less than 50% of total supply is produced locally, it accounted for 1.71% of the 38.7% contributed by Agriculture to GDP in 1997.

The industry features prominently in international trade, with $US 8.4 million of exports and $US 159 million of imports in 1997. Official figures for fish and fish products export are highly controversial, as the industry claims exports of the order of $US 50 million. With the control and regulation of exports to comply with EU Legislation, the true picture should emerge in the next year or two. For example, data already emerging from this source puts export of shrimps by 14 companies at 8 028 t, valued at $US 31 million in 1998. There are also significant exports of ornamental fish – indigenous strains of species such as Tilapia, Synodontis, guppies, etc., and import of some species of carp for aquaculture. (FAO Fishery country profile).

Currently the Nigerian fishing industry is in a dynamic state. There is over-capitalization in the industrial fleet; over fishing of the coastal resources; declining catch, both in quantity and especially in quality; environmental degradation seriously impeding the productivity of the artisanal sector; and declining efficiency due to lack of technical innovation.

Trends in vessel licence data show that between 200 and 300 vessels have been licensed to fish and shrimp every year in the last decade, and that they have together been landing between 23 000 and 34 000 t annually, stretching the resources to their limits. The vessels are inefficient in operation as most of them are at sea for only about 200 days/year. In the same period, the number of vessels licensed to fish has reduced and output has been declining, although catch per vessel could have improved. More than any other, the fish trawlers landings have demonstrated the degrading status of the stocks. The landings are dominated by juveniles of the most common species, while certain prized species have virtually disappeared.

The number of trawlers licensed for shrimp are on the increase, currently about 200 per annum. Total landings of shrimps are also on the increase, with a high of 12 254 t in 1995, when 235 vessels were licensed, and 10 807 t in 1997, when 197 vessels were licensed. Correlation is not at all possible because official records of shrimp landings include those of the artisanal sector. It is, however, clear that current output level of the shrimp fishery is way beyond potential yield estimates, mainly because of the entry of Peneaeus monodon into the fishery.

From other indicators, the shrimp industry appears to be performing reasonably well. In June 1998, Nigeria accomplished harmonization in the EU market for her fish products exports, which is mainly shrimp (head-on, headless and p.u.d.), together with other products such as sole fillets, cuttlefish and crab claws. The harmonization of Nigeria with EU regulations resulted in the listing of approved vessels. Responsibility for monitoring and maintenance of standards and recommendation for listing/de-listing has been vested in the Federal Department of Fisheries in accordance with the EU legislation, stating the special conditions governing imports of fishery and aquaculture products originating from Nigeria.

Shrimp trawling is, however, contributing significantly to the degradation of the coastal demersal stock. The industry is now being seen in both its positive and negative dimensions, and it is desirable to strike a balance, using appropriate technology. This issue is being tackled currently by the FAO/UNEP/GEF Tropical Shrimp Trawl Project.

The artisanal coastal operators, mainly through the selectivity of their gear, could exploit their resources in a sustainable manner if they had absolute jurisdiction. However, the 0 to 5 nautical miles area reserved for them is constantly violated by trawlers, especially shrimpers combing the river mouths for their target species. This sector is also seriously constrained by high cost of inputs, craft and gear, resulting from the general lull in the economy. The sustained output level may be attributed to some development interventions, targeted at groups of coastal fisherfolk, such as the IFAD- and ECOWAS-Fund-assisted Artisanal Fisheries Development Projects.

For the estuarine and brackish-water fisheries, the main issue is pollution: industrial, human and geophysical. Many fishing households in this environment can only just subsist, having lost their income generating capacity. The waters around are simply getting less and less productive. (FAO fishery country profile)

For the entire artisanal coastal and inland sectors, fishing is the major source of livelihood. A total of 700 000 fishermen (500 000 coastal and 200 000 inland) are recorded as primary producers. For such a well-integrated industry, total employment could well be five-fold. The industrial sector provides employment for about 100 000 Nigerians in various fields, such as management, engineering, vessel operation, distribution, marketing, etc. Commercial aquaculture is gaining ground and is also generating employment.

The offshore resources located between the 30 nautical mile territorial limit and the 200 nautical mile exclusive economic zone consist mainly of tuna. It forms part of the large Gulf of Guinea stocks. Despite this natural endowment, Nigeria is not actively participating in the exploitation of this resource due to technical constraints. Whereas a virile industry has developed over the last 30 years in the exploitation and transhipment of the Gulf of Guinea tuna under the management of ICCAT, no tuna vessels are based in Nigeria. Nevertheless, in the last two to three years, landings of 1 000 – 2 000 t annually from vessels operating in the EEZ have contributed to domestic supplies. (FAO, 2007)

The trawling industry is well developed and organized under the Nigerian Trawler Owners’ Association (NITOA). The fleet consists of small- and medium-sized vessels in the range of 9 – 25 m LOA and 20 – 150 GRT. There are about 40 trawling companies in Nigeria, most of which are members of NITOA. Most individual company fleet sizes are low (less than 4) and are mostly owned by Nigerians. The larger companies, with fleet size of 4 or more, are mainly partnerships with foreign investors. NITOA is working with government to address the numerous problems of the Nigerian industrial fishery sector, which include a limited resource base; inadequate infrastructure; unfavourable fiscal policy; inefficient resource management; and environmental concerns. (FAO fishery country profiles).

Industrial shrimping in Nigeria is operated on the continental shelf from 5 nautical miles. Vessels are licensed in accordance with the provisions of Fisheries law and Regulations. Presently there are over 36 companies and owing about 271 Nigerian flagged vessels licensed to shrimp within the territorial waters of Nigeria.

The artisanal marine fisheries can be categorized into:

The small-scale fishermen operate dug-out or improved canoes and they are 2 to 10 men on board according to the type of fishery engaged in. From their set nets they land demersal species such as croakers, catfish and shinynose, of good individual size. They also target shrimp (Penaeids) in the estuaries at a convenient stage of their maturation cycle, thus curtailing recruitment at sea for the industrial shrimpers.

This canoe fleet exploits the vast networks of brackish waters of the Niger Delta and other major rivers, estimated to be about 858 000 ha. It is a low-technology, labour-intensive fishery, using canoes 6 to 13 m long, paddled or motorized. The gear is mainly gill nets, cast nets, hooks, beach seines and various forms of traps in the estuaries. They target small pelagics – Sardinella spp. and Ethmalosa spp. – which they land in huge quantities in season (November to April).

These fisheries are concentrated in the east because of the higher productivity of the waters off the delta region and the wider continental shelf. Oceanographic conditions, including poor upwelling, limit the productivity of the waters off the Nigerian coast. This is compounded by the generally narrow continental shelf, and the result is limited potential yield of demersal finfish stock. Potential yield estimates for demersal fish are 27 000 – 38 000 t and 4 500-5 000 t for shrimps. The species composition is dominated by croakers (Pseudotolithus spp.), grunts (Brachydeuterus spp.), various soles, catfish (Arius spp.), and shrimps (Penaeus spp.). (FAO, 2007)

Other sciaenids, which occur in Nigeria waters, include the bigeye grunt (Brachydeuterus auritus) and moonfish, (Vomer setapinnis). Some of these fish species are also genetically undersized including the members of the prominent pelagic family Clupeidae such as Sardinella spp. which are fished intensively by the artisanal sector. The sparid community comprises mainly the following major families/species: – Lutjanidae (Red snappers) – Lutjanus goreensis L. fulgens, L. agennes and L. dentatus, and serranidae (Groupers), Epinephelus aeneus. Other sparid family/species found in Nigerian waters are the Sparidae, Dentex canariaensis, D. angolensis, D. congoensis (down to 50 m depth and below), and the breams e.g. Pagrus Sp. Pagellus coupei and Pagus sp. down to 170-m depth and below.

The commercial penaeid shrimps being exploited in the Nigerian coastal waters predominantly inhabit the soft mud substrate of the Niger Delta and eastwards to Cross River. They occur too in Lagos West Grounds. Their order of importance in the inshore shrimp fishery of Nigeria is: