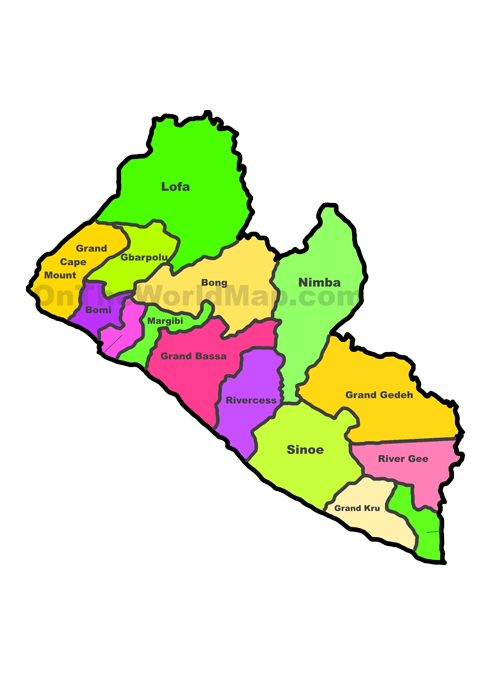 PORT: Monrovia is the only port that offloads local industrial fishing vessels with foreign vessels using other ports in the region, or transshipping at sea.

Liberia has a total land area of about 111,370 km2, of which 96,320 km2 86 percent) is dry land, drained by natural streams and rivers. The vegetation consists of forest and woodland (39 percent), pastures (2 percent) and arable land (ca. 36 percent). With an Atlantic coastline of about 570 km, a continental shelf averaging of 34 km in width, affording an area of about 20,000 km2 of fishing ground extending to 200 nautical miles,

traditional fishers have operated along the Liberian coast and inland waters for centuries mainly at the subsistence level.

Fishers were catching fish to feed their families and excess catches were bartered for other essential commodities and goods. The first attempt at commercial fishing in Liberia was in 1848 when the then President of the country, Joseph Jenkins Roberts, converted his yacht into a fishing boat.  The first fishing trawler to operate in Liberian coastal waters belonged to Woerman Company, a German company that operated in the country between 1938 and 1939.  Fishing was a daily activity with the trawlers returning to port at the end of each fishing day and catches were sold immediately to avoid post harvest losses because of lack of means for preservation of fresh fish.Considering the success of the Woerman Company and the realization of the potential important role of fisheries in national socio-economic development, the Government of Liberia, in 1952, requested the assistance of FAO and the United States Government to help develop its fisheries sub-sector.  Experts were sent from FAO and USA to assess the fisheries potential of the country.  As a result of months of exploratory fishing, it was established that a medium striving fishing industry could be established in the country. Currently, fishery is a key sector in the agricultural framework of Liberia as well as in the national economy. In 2002, fisheries contributed to 12% of agricultural GDP and 3.2% of the national GDP. Fisheries play a key role in the livelihoods of the coastal population, and directly employ about 33,000 people using about 3,500 small vessels (canoes).

The marine fisheries sector in Liberia is usually categorized into two sub-sectors; i) Industrial and ii) small scale (or artisanal) fisheries. Of these the small scale fisheries sub-sector is the most important with respect to landed weight and remains the largest producer of fish for domestic consumption.

The industrial fishery began in the mid 1950’s and targeted mainly the shrimp resources within the Sherbro fishing grounds, which extends into Sierra Leone. The Mesurado Group of Companies became operational in the early 1960s and developed into the most dominant force in Liberian fisheries.  The company owned and operated more than 25 vessels, including shrimpers and double rigged trawlers.  The company was owned by the Tolbert family and operated its own harbour and processing facilities with three thousand (3000) metric tonnes of freezing capacity.  Shrimp was the company’s major export commodity, with a monthly shipment of about 60 metric tonnes to Europe and Asia.  The Mesurado Group of Companies is said to have been one of the largest fishing entities in sub-saharan Africa until 1980 when she began to decline following the military coup.

In 1985, 8 companies registered 19 stern trawlers. As a result of a Free Enterprise System, up now about 30 rigged side and stern trawlers have been registered annually within the industrial fleets. About seven companies have survived, despite war and difficult conditions.

Foreigners companies presently dominate the industrial fishery.  There are currently fourteen (14) fishing companies operating legally in Liberia; 6 companies are solely engaged in the importation of frozen fish from the high seas, and 8 companies are engaged in industrial fishing activities operating 27 fishing vessels with a combined Gross Registered Tonnage (GRT) of 4,122 tonnes. The fishing vessels operating in Liberian waters range in size from 91 GRT Chinese pair trawlers (ice carriers), to 251 GRT fishing trawlers with onboard freezing, processing and storage facilities.  Industrial fishing vessels land their catches at the fishing pier in the Free Port of Monrovia. The level of employment for Liberian nationals in industrial fisheries is 61% representing 17 % of the total employment in the fisheries sub-sector.

Fish landed locally by all licensed trawlers is estimated as 1500 tonnes and 2800 tonnes for 2004 and 2005 respectively (BNF, 2006). These figures are grossly misreported, and there is strong suspicion that a number of licensed industrial fishing vessels are engaged in illegal transhipments in the high seas and these are not reflected in the national statistics. Further should be realized that the annual catch within the EEZ of Liberia is much higher as poaching is rampant due to the complete lack of Monitor, Control and Surveillance (MCS).

Available data on fish export is unreliable as trade is usually carried out on sea, thus depriving government of maximum benefits from the fish trade. Nearly all shrimps are processed and frozen for export abroad. The Government of Liberia encourages the reservation of finfish for the domestic market, but small quantities are exported.

Mesurado’s success within the harvesting sector was quickly followed by the installation of shore-based infrastructure, including cold stores, a dry dock and associated repair and maintenance shops. The old Mesurado complex included 5,000 t of freezer capacity, an 18-t-per-day blast freezer, a 2,000-ton cold store and processing equipment, but was completely destroyed as a result of the civil war. Currently, there are about 32 cold rooms in Monrovia with a total capacity of about 18,000  tonnes.

Indigenous Kru fishermen, Fanti and Popoe fishermen (and their families) who migrated from the neighbouring countries of Ghana, Benin and Ivory Coast are presently the major actors in the artisanal fishery. There have been recent arrivals of Gambian and Senegalese fishermen who are presently operating in Cape Mount County. Artisanal fisheries is dominated by the Fanti and Popoe fishers as they own and use  the larger motorized fishing canoes and employ more sophisticated fishing nets and fishing techniques and, as a result, catch more fish per trip than the indigenous Kru fishermen.

The indigenous Kru fishermen fish with 1-3-person crews from small dug-out canoes of about 7 m, powered by paddles or sail. Some are now powered by 7 hp outboard engines. Their gear are mainly hook and line and occasionally gillnets are used.

Fanti fishermen, of Ghanaian descent, residing in Liberia since the 1920s (Marquette et al,, 2002),  utilize larger canoes, 12 m, powered by 25-50 hp outboard engines, with crews as large as 15. Their gear is more sophisticated. Ring and purse nets are used for small pelagic species, with large gillnets specifically adapted for different species and seasons also employed. The Fanti are responsible for about 40 percent of the volume of artisanal landings. Before the war in Liberia, Fanti fishermen were responsible for 90 per cent of the country’s artisanal fish catch.

Another group, the Popoh, specialize in the use of beach seines 200 to 800 m in length, which are primarily used for catching silverfish

About 13,000 fishers and 18,000 fish processors (mongers) and their families live in 139 communities in coastal counties. Together they operate 3470 canoes of which 8% are motorized (Drammeh 2006)  and the largest number of canoes are operating in Montserrado and Grand Bassa County (Figure 1).

The annual reported landings for the artisanal sector ranges from 2,000 -7,700 tonnes/year with an average landing of about 1,5  tonnes per canoe per year

Main resources and fisheries of the marine sub-sector

Fishery resources in Liberia can be classified as:

Liberia is cut by six major rivers, which flow from the Fouta Djallon Mountains of Guinea. The Lofa, St. Paul, St. John and Castos are within the country. The Mano River forms the border with Sierra Leone and the Cavalla runs along the southern border with Cote d’Ivoire. In total, the country has some 1,800 km of river, nearly all of which is shallow, rocky and not navigable. There are also large swamp areas and numerous coastal lagoons, including Lake Piso, one of West Africa’s larger lagoons. Estimates of production from these sources are not available.

The value of Inland fishery is not known but it is an important seasonal subsistence activity, using mainly traditional fishing gears and traps. Almos every girl above the age of 15 and women in the villages have fishing nets and are engaged in catching fish in rivers and creeks during the dry season. Traditionally one of the major training girls under go is the manufacturing of fishing nets (Seilay, 2005)

About 600 fishers and 925 fish mongers and their families live in 16 fishing communities along the larger water bodies in the counties of Bong, Lofa, Nimba, Grand Gedeh, Gbarpolu and the River Gee.