South Africa: Great white sharks have suddenly disappeared from one of their favorite hangouts 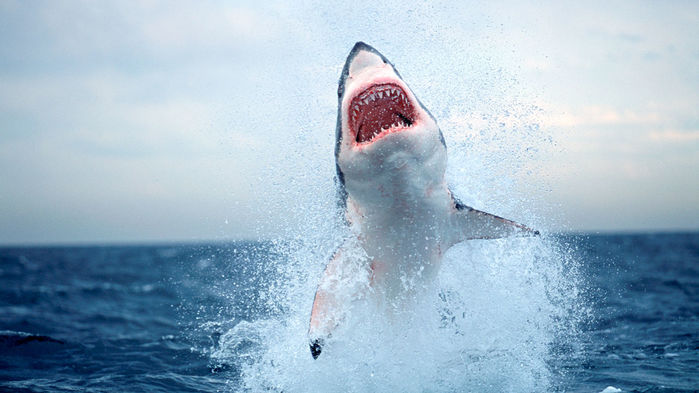 Great white sharks are gone from False Bay in South Africa. One theory holds that they were scared away by orcas. Chris and Monique Fallows/Minden Pictures

Town, South Africa—one of the best-known hot spots of the predators in the world—and scientists aren’t sure why. Orcas, which love to dine on shark liver, may have scared them off, researchers say, but human activities could also play a role.
Shark Spotters, a local charity that monitors the city’s beaches daily and warns swimmers if sharks are near, has not recorded a single confirmed white shark sighting this year—not even during the summer months, from January to April, when the fish usually come close to shore.
The boats that take tourists to watch sharks hunt seals at Seal Island, in the middle of False Bay, have not recorded sightings either. Sharks tagged along the South African coast have not “pinged” any of the receivers located in the bay since January 2017, and white shark bite marks have been missing from whale carcasses floating in the bay this year.
The absence is unprecedented in Shark Spotters’ 16-year history, says the charity’s research manager, Tamlyn Engelbrecht. Usually, there are more than 200 sightings each year; the number has never been zero. “Of course I’m worried. White sharks play an incredibly important role in False Bay,” she says. Shark tourism helps raise money for conservation, and the sudden absence of the apex predators could have knock-on effects on the whole ecosystem. Engelbrecht and other shark scientists are working with fisheries and marine mammal experts to understand what’s going on.
One possibility is that sharks are on the run from even bigger predators. Data show that white shark sightings have dropped significantly in False Bay since 2015 when two orcas (Orcinus orca)—nicknamed Starboard and Port because their dorsal fins curl opposite ways—started to predate on a local colony of sevengill sharks (Notorynchus cepedianus).
Several white sharks have been found dead up the South African coast with their livers missing, another telltale sign. Orcas are known to remove sharks’ livers—which are fatty and nutritious—with surgical precision, leaving the rest of the carcass behind. Scientists in Australia and California have also observed how shark-killing orcas can cause white sharks to migrate out of an area.
“But it could be other things, like changing prey distribution,” Engelbrecht says. Overfishing and pollution are likely to play a role, says Sara Andreotti, a marine biologist at nearby Stellenbosch University in South Africa. “My worry is that the focus on the orcas is distracting the attention from problems that humans could solve,” she says.
The white sharks may not have gone far. Marine Dynamics—a cage diving operator that launches from Gansbaai, South Africa, a town less than 100 kilometers east of False Bay as the shark swims—says it has had some white shark sightings this year.
In False Bay, other shark species are already moving in to fill the niche left by the great white sharks. At Seal Island, scientists have seen sevengill sharks hunting seals on the surface—something they never saw when great whites were in the vicinity.
Shark Spotters is scaling back its activities on some beaches, but will keep a watchful eye on the most popular ones. The great white sharks could return at any time, and other large sharks, like bronze whaler sharks (Carcharhinus brachyurus), frequent the waters, too.