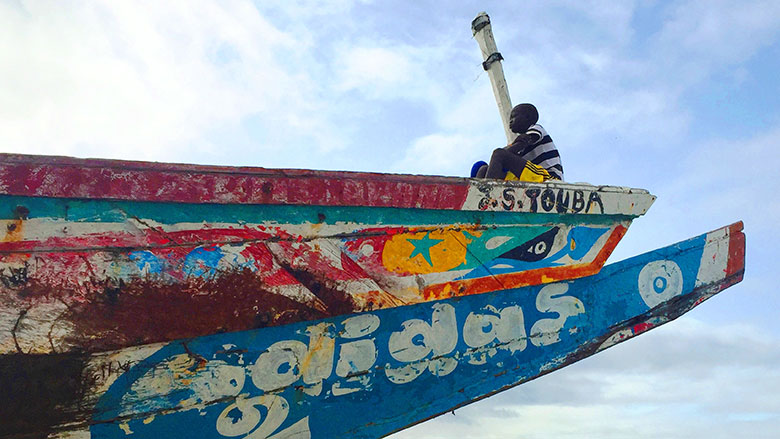 “
Jën” or fish in Wolof, is a prized resource in Senegal. The second main ingredient in the national dish “ceebu jën” (the first is rice), it nourishes the entire population and accounts for more than 50% of the population’s animal protein intake.  Its harvest and post-harvest sectors contribute 4% to Senegal’s overall gross domestic product (GDP) and directly or indirectly employs 17% of the country’s working population.

For coastal fishing communities like Ngaparou, located 64 kilometers south of Dakar, “jën” is symbolic of their history, their traditions, their profession, their source of income, and their pride. No one wants to be called a “yabooy” or little fish! However, small or big, fish of all sizes are disappearing, pushing fishermen to brave wider fishing ranges with inadequate equipment for rough seas.
Unfortunately, Senegal’s open access regime to artisanal fisheries has contributed to the depletion of marine resources and the increase of fish prices. The overexploited fish stocks have pushed the Senegalese to extend their navigation range, and therefore fish further offshore, often in the neighbouring countries of Guinea-Bissau and Mauritania. This search for more productive fishing grounds adds to the costs due to the additional fishing gear needed, the price of the fuel used for a wider fishing range, and the increased risk of accidents at sea. These increased costs of fishing have reduced fishermen’s revenues significantly. In addition, the commercial small-scale fishing fleet went from 13,000 boats in 2009 to 19,000 in 2015. This increase in the number of boats without proper monitoring and control have continued to negatively impact the country’s already overexploited resources.
“Senegal, like many of its neighbours, claims far lower returns than expected,” says Magda Lovei, World Bank Practice Manager, Environment & Natural Resources Global Practice. “An additional $300 million in annual value-added could be created in West Africa with better governance. To leverage the rich marine and freshwater resource endowments and maximize sustainable and inclusive growth, Africa must invest in improved management systems and appropriate infrastructure.”
Senegal recently launched a campaign to emboss or place identification plates on 19,009 registered artisanal boats. Registration and embossment allow the monitoring of the overall capacity of the artisanal fleet and are a first step toward a better governance of the fisheries sector.  It is also an important measure to fight illegal, unreported, and unregulated (IUU) fishing from domestic as well as foreign fishermen. The report Western Africa’s Missing Fish, published by the Overseas Development Institute, claims that Senegal lost $300 million or 2% of its GDP to IUU fishing in 2012.
Boat identification mechanisms are also a first step in the acquisition of fishing permits with management features such as target species and zones. In the event of an accident at sea, they allow for a rapid identification of a boat and its crew. In 2015, 65 such accidents were registered with 95 deaths.
The World Bank has supported this effort through the West Africa Regional Fisheries Program (WARFP), a program covering coastal West Africa from Mauritania to Ghana, with an investment of $165 million over the past six years.
“This campaign is part of a larger effort toward sustainable fisheries in Senegal,” said Berengere Prince, World Bank Senior Natural Resources Management Specialist in charge of the program. “WARFP intends to improve fisheries governance and management, help rebuild stocks for food security, and allow a sizeable increase in revenues from the wise use of marine resources. The activities include community led fisheries management and artisanal fisheries that have traditionally been unmanaged.”
To relieve the pressure on fishing resources while continuing to provide for the social and economic needs of the fishing communities, WARFP financed alternative livelihoods and women entrepreneurship – over $1.2 million were allocated to revenue generating activities and $1 million to microcredit for projects allowing the reconversion of fishermen.
Senegal has had much success in the co-management of marine resources. In Ngaparou, fishermen, fishmongers, boat owners and other stakeholders came together to implement a system aimed at ensuring a balanced management of these resources. The results were transformative. Key species that were hard to find have begun to return in the co-managed areas. Lobsters’ weight has increased by 133%, allowing communities to enjoy larger returns.
“To scale-up the results of community led fisheries management it is essential to further decentralize and to empower communities by giving them the rights and responsibilities needed to better protect the resources,” said Asberr Mendy, World Bank Natural Resources Management Specialist.
These efforts are expected to bring better governance, and eventually restore the fisheries resources, replenishing them both in terms of abundance and diversity.
Source : http://www.worldbank.org
Partagez