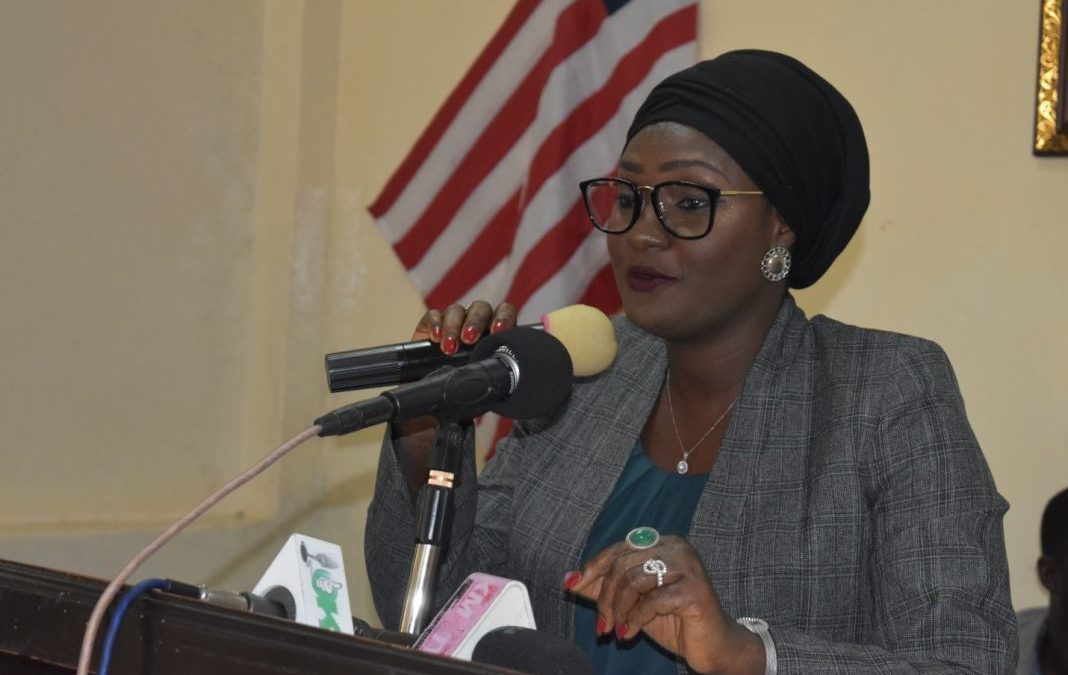 Monrovia – Pointing to what was once a vibrant and lucrative Mesurado fishing Pier, near the Coast Guard Base at the Freeport of Monrovia Wednesday,  Yevewuo Subah, the coordinator of the World Bank project looking to revamp the fisheries sector in Liberia, foresees a rebirth for fishing where Liberia could become a beehive for fishing activities, not just domestic but for the West African sub-region.

In a post-war, transitioning democratic nation short on cash and an economy in a freefall with prices of traditional resources like iron ore, rubber, gold and diamond, this could mean good news in the long term.

The industry has always been around.

As far back as 1848 when Liberia made its first attempt at commercial fishing,  then President Joseph Jenkins Roberts, converted his yacht into a fishing boat.

The first fishing trawler to operate in Liberian coastal waters belonged to Woerman, a German company that operated in the country between 1938 and 1939.

During those days, fishing was a daily activity with the trawlers returning to port at the end of each fishing day and catches were sold immediately to avoid post-harvest losses because of lack of means for preservation of fresh fish. Considering the success of the Woerman Company and the realization of the potential important role of fisheries in national socio-economic development, the Government of Liberia, in 1952, requested the assistance of FAO and the United States Government to help develop its fisheries subsector. Experts were sent from FAO and the United States of America to assess the fisheries potential of the country. As a result of months of exploratory fishing, it was established that a medium striving fishing industry could be established in the country.

Many years later, NaFAA is hoping for a return to the days when the sector was at its peak.

Through the World Bank and the European Union, Subah says efforts are being made to restore the pier so that industrial and semi industrial vessel can resume landing to what we foresee to be an industrial fishing market. “It will provide an opportunity for those who want to go into processing a and give fishermen access to good quality fish and encourage local fishermen to process fish for market. As you know, fresh fish is more valuable than frozen fish.”

For months now, the National Fisheries & Aquaculture Authority(NaFAA) has been in discussions with the World Bank for a fisheries project valued at US$21 million. Phase two of that project dubbed, the  West Africa Regional Fisheries Project (WARFP) came to an end as a result of the pause on regional project by the bank in December 2018. It has now been increased to US$40 million subsequent to the agreement in July 2019 to continue with as a National Project.

The project titled Sustainable Management of the Fisheries Project aims to sustain the gains of the WARFP in Liberia and develop National capacity to improve the value added and increase the economic contribution to the fisheries sectors and the restoration of key infrastructure to enhance the sector contribution to the economy.

The new World Bank National Fisheries Project will focus on the rehabilitation and expansion of the Mesurado Fishing Pier to a state-of-the-art Modern Fishing port with onshore processing facilities for value addition, it will also prioritize the establishment of landing jetties targeted in five coastal counties with densely populated fishing communities such as Montserrado, Grand Bassa County etc, in an effort to reduce to huge Post Harvest loss and supply the domestic market with high quality of fish products which has a fish demand deficit of 33, 000metric tons

Liberia has the longest coastline in West Africa and the government is hoping to improve food security and ensure the livelihoods of the country’s 33,000 fisherfolk.

With infrastructure development in the fisheries sector, Liberia will be in a strong position to compete with its next-door neighbor, and gravitate from a regime of only issuance of License for wild marine fisheries to a fully industrialize and commercialized fishing industry which includes huge exports proceeds, signing of fish access agreement through bilateral arrangements such as EU-Liberia or Senegal-Liberia as well as with Private Tuna fishing industry.

To date, Liberia has no site for industrial fishing vessels to unload. This is where the proposed rehabilitation and reclamation of parts of the pier will provide, a jetty for industrial fishing vessels to land and offload and/or transship fish, and (ii) product storage and transport facilities. Mesurado Pier was the site of one of the largest fish export operations in Africa during the 1960s and 1970s, but has fallen into disrepair since the conflict. This rehabilitation would provide the country with a key entry point for fish processing and products.

Director General Emma Metieh Glassco explains that the World Bank project should address a number of issues holding the sector from taking off in Liberia.

“The World Bank is allotting at least 40M towards revamping the Fisheries sector which is seems to be a short-, medium and long-term domestic revenue source for contribution towards the national budget. It tends to focus on the expansion and rehabilitation of Mesurado fishing pier into a modern fishing port and the establishment of landing jetties in fishing communities. The Mesurado fishing port/pier when industrialized could be the engine for national growth.”

In early, February,2019 Liberia signed a partnership agreement with the Icelandic government for the purpose of establishing and equipping national fisheries competent laboratory to meet up with international standards for the certification and testing of fish product both for imports and exports.  It will also include smoke ovens in local fishing communities. Through the setting of the Competent Laboratory, Liberia is expected to gain accreditation from the EU, USA, Japan and other international markets for direct export of fish. Presently, Glassco says, all fish products are tested and certified through second-member states within the sub-region, for example, Ghana.

Portions of the Mesurado Pier is still rundown but not for long. In a few days, the World Bank is expected to put pen to paper on the deal that should get the revamp project underway.

But even amid the expectations, the National Fisheries and Aquaculture Authority is struggling to rid the area of abandoned vessels still docking at the pier, many of them yet to pay fines for illegal fishing.

Glassco says efforts are underway to remove abandoned vessels from the Mesurado Pier. The process which started mid last year is forcing all vessels owners and agents to apply efforts to remove the vessels including those that went through court proceeding including F/V Nine Star which is being scrapped. The  F/V Eros, another abandoned vessel has committed itself to the final payment of financial obligation while agents for the F/V Seiro-1 vessel have promised to get it removed on or before January 31, 2020. F/V Global 8, another vessel has been refurbished for fishing operations as well as F/V Benty-1 which is to be turned over to the Agent for possession.

Besides these five vessels, Glassco says, all others are submerged wrecks which can only be removed under different arrangements.

Illegal fishing has been a huge problem in West Africa with some seven million people living along the coast and the sea is their livelihood.  Industrial fishing fleets from Europe and China and are ravaging coastal fish stocks. The Liberian government has been working with Sea Shepherd for two years to try and stop illegal fishing.

Partnering with Sea Shepherd, Liberian Coast Guard sailors and Marine Fisheries inspectors have been working to stop illegal, unreported, and unregulated fishing in their territorial waters.

This has enhanced Liberia’s reputation as a regional leader in the fight against illegal fishing. Since the start of this co-operation between Sea Shepherd and the Coast Guard, fifteen fishing vessels have been held for illegal fishing and other fisheries crimes; only three arrests were made in the seven years prior to this partnership.

“The World Bank is allotting at least 40M towards revamping the Fisheries sector which is seems to be a short-, medium and long-term domestic revenue source for contribution towards the national budget. It tends to focus on the expansion and rehabilitation of Mesurado fishing pier into a modern fishing port and the establishment of landing jetties in fishing communities. The Mesurado fishing port/pier when industrialized could be the engine for national growth.”

A 1983 Bio-Economic Analysis of the Liberian Shrimp Fishery and review of other marine fisheries in Liberia documented for the International Finance Corporation in Washington, DC, concluded even then that the revenue nature of taxes on fuel, duties, and the opportunity costs of labor were considered.

The analysis came to the conclusion that “Maximum economic rent would be generated from the shrimp fishery with a fleet size of about fourteen 365 HP crawlers. At this level it is estimated that approximately 800 tonnes of shrimp would be caught annual with an approximate landed value of $US5.7 million dollars. Because of the uncertainty in the accuracy of the data used to parameterized the shrimp production model and the cost benefit analysis, this estimate could be in error by up to three trawlers.”

Some 37 years later, the potential remains.

Close neighbors Ivory Coast, Ghana, Guinea and The Gambia are seeing huge gains, showing encouraging signs that Liberia could generate the same or even better.

For example, the artisanal subsector in The Gambia employs between 25,000 and 30,000 people, while about 2,000 people work in the industrial sub-sector. The livelihoods of an estimated 200,000 people are indirectly dependent on fisheries and related activities. For women in particular, fish processing and marketing provide an important source of income and livelihood support: an estimated 80 percent of fish processors and 50 percent of small-scale fish traders are women.

In neighboring Guinea, the National Institute of Statistics, reports the contribution of the industry to the GDP is 15,8 percent while fisheries represent only 3.7 percent. All the fisheries sectors contribute with more than 40 percent to the total State budget.

In Ghana, the Fisheries sector is estimated to contribute about 3 percent of the nation’s gross domestic product (GDP) and 5 percent of the Agriculture GDP. … The per capita consumption of fish is estimated at about 25 kg per annum representing 60 percent of animal protein intake by the Ghanaian populace.

In the Ivory Coast, a modern fishing wharf opened since 1964 in Abidjan, which is Africa’s largest tuna fishing port, handling about 100,000 tons of tuna each year. There are fish hatcheries in Bouake, Bamoro and Korhogo. Commercial fishing for tuna is carried on in the Gulf of Guinea; sardines are also caught in quantity. The total catch was 71,841 tons in 2004, with commercial fishing accounting for 25 percent; artisanal fishing, 74 percent; and aquaculture, 1 percent.

To the contrary, in Liberia, the sector has been underperforming unlike other countries because of outdated laws and lack of polices to probably manage the fishing sector. During the 1970, Liberia generated at least 40M per annum from the Mesurado Fishing Pier on export of shrimps which happens to be one of our main commercial species to Japan. Continue reading…