Senegal: Overfishing leaves an industry in crisis in Senegal 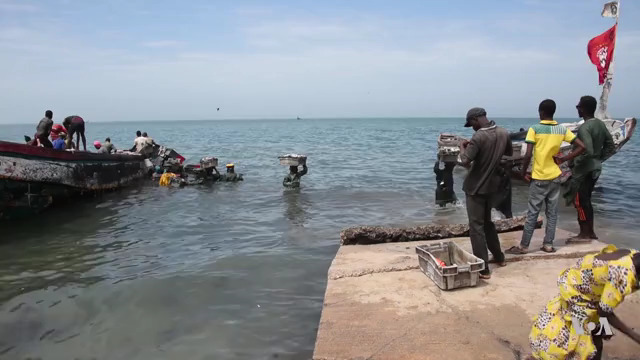 JOAL, SENEGAL – It was almost sunset as fishermen guided their boats back onto the beach at Joal, Senegal, after a long day at sea.

At first glance, it looks as though they’d collected a good day’s haul, but their nets were full of small sardinella, known locally as yaabooy.
Fisherman Mamdou Lamine had caught just one bucket of mackerel. He held one up next to a yaabooy to show how much bigger it was — and there are many more yaabooy than mackerel these days, he said. Furthermore, A local favorite, grouper, called thiof in Senegal, is getting harder to find.
The U.N. Food and Agricultural Organization says more than half of West Africa’s fisheries are dangerously depleted. Local officials in Senegal say it’s the foreign-owned industrial boats that have depleted fish stocks and destroyed marine habitats.
When fishermen at Joal set off on trips, they have to carry more fuel to reach waters farther away, and the added fuel costs cut into their earnings.
Longer trips, more fuel

Saff Sall was heading to Guinea-Bissau, about 200 kilometers south, in search of the elusive thiof. He said the fish are found among rocks, but that there are no more rocks because they have all been destroyed by the big industrial boats. That’s why they have to go to Guinea-Bissau to search for fish.
Before, Senegalese fishermen had to spend only a week at sea to have all the fish they needed, he said, but now they have to spend twice as long to catch what they need.
Under-regulated fishing by locals has also contributed to the problem, said Joal Fishing Wharf chief of operations El Hadji Faye.
He said the government was making an effort, but the situation was very complicated. He said that in the Senegalese city of Saint Louis, for example, each neighborhood has a designated day it can fish. But in Joal, they do not do that yet. Every day, he said, all the fishermen go to sea. Sometimes when a lot of them go, they bring back a lot of fish and the price is not good.
Economic staple

Fish are the backbone of the town’s economy. The day’s catch is taken to the local smokehouse, turned into fish meal for export abroad or sold fresh at the market, where knife-wielding female vendors prep the fish for sale.
Business is tough even for vendors with the rare large fish. Scarcity has driven up the prices. The price of thiof per kilogram has doubled in the past five years, local officials said.
Fish vendor Rose Ndour said that maybe those in the industry would do other work — if there were better jobs available.
The impact of overfishing is felt in households. The wife of the fishing wharf manager, Coumba Ndiaye, said that for the family’s evening Ramadan meal, she had to make due with sardinella because she could not get an affordable thiof at the market.
She made thieboudienne, Senegal’s national dish. Its name literally translates to “fish and rice.” But for a good thieboudienne, you need good fish like dorade or thiof.
The fish are a part of Senegal’s culture. Ndiaye said that “when someone says your husband is ‘thiofee,’ they are comparing him to thiof. The thiof is beautiful and noble. The thiof is classy.”
The children sat on their parents’ knees as the family ate around the large shared bowl of thieboudienne.
The fishermen would return to the sea the next day to try their luck again.