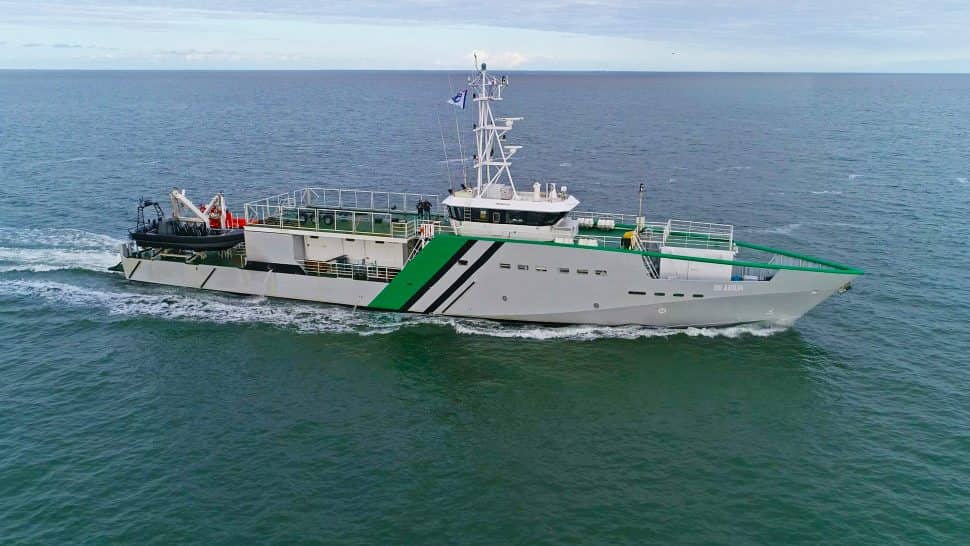 The Nigerian Maritime Administration and Safety Agency (NIMASA) has taken delivery of two special mission vessels built in the Netherlands to fight piracy and maritime crime.

The two vessels were launched by Shipyard De Hoop in Foxhol, the Netherlands, on 1 July 2019. Sea trials of the DB Abuja (457) were completed towards the end of October, with the DB Lagos (459) following the next month.

The two vessels were acquired through Israeli company Blue Octagon to improve maritime security off Nigeria’s coast, combating issues such as illegal fishing, terrorism, oil theft, illegal immigration, smuggling and piracy. They will also assist NIMASA in inspections and search and rescue.

The vessels were taken into service by NIMASA and the Nigerian Navy at the end of February and form part of the government’s Integrated National Security and Waterways Protection Infrastructure (Deep Blue) Project. A command, control, computer communication, and information (C4I) centre began 24 hour operations in August 2019 at the NIMASA base in Kirikiri, Lagos as part of the project.

Speaking during the vessels’ handover, Chief Security Officer, Western Naval Command, Rear Admiral M M Bashir said, “piracy is an act inimical to the growth of the Nigerian maritime sector and we are prepared, more than ever before, to give it all it takes to end this nefarious act.”

“This milestone in asset delivery inches us closer to full operational take-off of the Deep Blue Project, hence it marks a huge victory for the Nigerian maritime sector in the fight against maritime insecurity,” he said of the arrival of DB Abuja and DB Lagos.

The DB Abuja and DB Lagos were custom designed by Shipyard De Hoop. The 55 metre long vessels feature hybrid diesel-electric power plants for low fuel consumption, with electric motors used at low speed and twin Caterpillar diesels providing up to 4 700 kW for full speed (cruise speed is 21 knots). The DP2-class vessels were developed for round the clock operations and are capable of remaining on station autonomously for at least thirty days.

Each vessel can accommodate up to 36 people. A helicopter is able to land on the aft deck, while a pivoting A-frame davit can launch and retrieve interceptor boats weighing up to 5 000 kg.