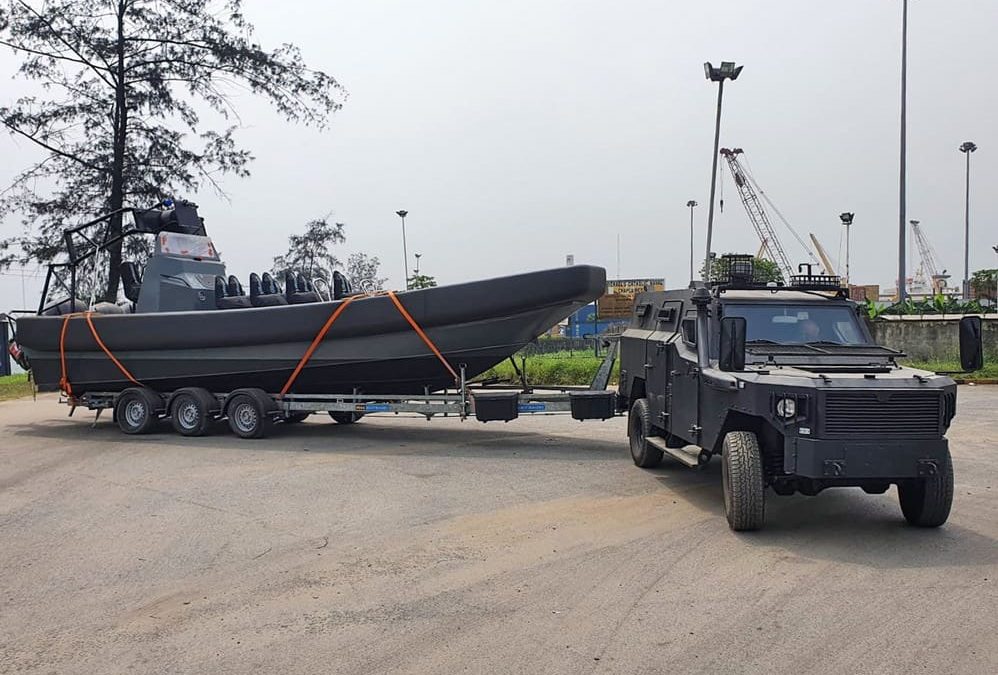 NIMASA Director General/CEO Bashir Jamoh on 27 February tweeted photos of the interceptors being unloaded, saying “from Onne to Lagos, we are counting down to deployment day. Our fast-moving interceptor boats will be crucial for interdiction purposes.”

Last year De Haas said it was building 18 DHM1050s in 12 months and thanked its partners Blue Octagon, Baltic Workboats, MARIN, Yamaha Motor Europe and Ullman Dynamics for their participation in the project. Under its active projects list it has 17 DHM1050s as being built for a foreign customer, with delivery from 2019.

The DHM1050 boats are 10.45 metre long and fitted with triple 300 hp Yamaha outboard motors, giving a top speed of nearly 60 knots and a payload of 2 000 kg. They are fitted with ten passenger seats in front of the pilot’s station.

Last week Jamoh said “We are deploying high-tech assets under the Deep Blue Project to not only deal with piracy and armed robbery in our territorial waters frontally but also respond to the increasing sophistication of these maritime crimes.

“The Nigerian Navy and NIMASA are partnering to ensure a high level of security in our waters. We are tying up all loose ends and very soon everything would become manifest and clear to stakeholders and operators,” he stated.

He added that the Nigerian Navy has recently deployed 14 warships to enhance security in the Lagos anchorage area and the wider maritime domain. Other assets, including special mission vessels, interceptor boats, and special mission aircraft, are also being deployed under the Deep Blue Project.

The pirates come from Nigeria’s turbulent Niger Delta, experts say. The region produces the bulk of the nation’s petroleum, but is woefully underdeveloped, scarred by pollution and has some of the highest unemployment in the country.

Bands of men desperate for money engage in a variety of illegal but lucrative activities, including kidnapping, stealing and refining oil, and piracy. They often bring the kidnapped crew to the creeks that snake through the swampy region.

In February NIMASA said it would deploy the vessels DB Lagos and DB Abuja to the Lagos anchorage to enhance maritime security there. These were delivered in February 2020. The DB Abuja and DB Lagos were custom designed by Shipyard De Hoop in the Netherlands. The 55 metre long vessels were developed for round the clock operations and are capable of remaining on station autonomously for at least thirty days. A helicopter is able to land on the aft deck, while a pivoting A-frame davit can launch and retrieve interceptor boats weighing up to 5 000 kg.

At the end of February Nigeria’s Transport Minister Rotimi Amaechi said Nigeria would commission $195 million worth of aircraft, boats and vehicles in the next three months to strengthen security in the pirate-infested Gulf of Guinea under the Deep Blue Project. This includes two special mission vessels, two aircraft, two helicopters, four UAVs, 16 armoured vehicles and 17 fast interceptor boats.

The unmanned aerial vehicles appear to be RemoEye 002Bs manufactured by South Korea’s Uconsystems. The type has a wingspan of 1.8 metres, top speed of 80 km/h, endurance of 60 minutes and range of 10 km, according to the manufacturer. The 3.4 kg aircraft is powered by an electric motor and has an electro-optical/infrared camera payload. It is hand launched and recovered via an airbag system.

Proforce is supplying armoured personnel carriers to NIMASA, which will use them to strengthen security on the Niger Delta through land patrols. It is not clear what model of vehicle Proforce is delivering for the Deep Blue project.

The fixed wing aircraft are Cessna Citation CJ3 jets. In December 2018 Israel’s BIRD Aerosystems said it had been contracted to supply Cessna Citations configured for the maritime surveillance role to a new, undisclosed African customer, which is believed to be Nigeria. The aircraft will be fitted with BIRD’s Airborne Surveillance, Intelligence and Observation (ASIO) maritime solution as well as its Mission Management system (MSIS). In February this year, BIRD Aerosystems revealed it was close to delivering Citation CJ3 aircraft to an undisclosed African government that will use them for maritime surveillance.

The government is acquiring these assets under its Integrated National Security and Waterways Protection Infrastructure (Deep Blue) Project, which aims to combat issues such as illegal fishing, terrorism, oil theft, illegal immigration, smuggling and piracy in Nigeria’s exclusive economic zone and the Gulf of Guinea. Most assets were to be delivered by mid-2020.

Israeli company Blue Octagon is sourcing much of the hardware for Deep Blue, which also includes a command, control, computer communication, and information (C4I) centre, which began 24 hour operations in August 2019 at the Nimasa base in Kirikiri, Lagos.