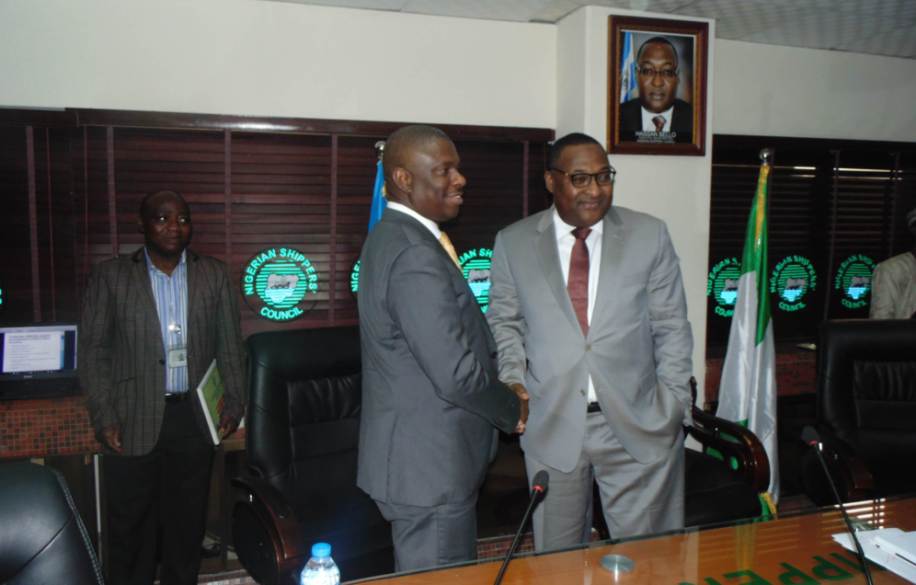 L-R: The Director General, Nigerian Maritime Administration and Safety Agency (NIMASA), Dr. Dakuku Peterside in a handshake with the Executive Secretary, Nigerian Shippers' Council (NSC), Barrister Hassan Bello during a presentation on "Introducing the Blue Sea Economy Concept" by the NIMASA DG to the Management of NSC in Lagos. Photo: NIMASA

The Director General of the Nigerian Maritime Administration and Safety Agency (NIMASA) Dr. Dakuku Peterside has stated that in order to harness the opportunities derivable from the Blue Economy in Africa there is a need for a proper framework and structure which will enhance the coordination of the sector.
The NIMASA DG who stated this during a paper presentation to the Management of the Nigerian Shippers’ Council (NSC) in Lagos titled; “Introducing the Blue Economy Concept”  said that in realizing a desirable blue sea economy framework, participatory engagement and agenda setting, participatory policy design and implementation and multi sector partnership are key areas that must be considered.
Speaking further, he said the Blue Economy which stands on three pillars namely; Environmental Sustainability, Economic Sustainability and Social Sustainability has a lot of benefits to the growth and development of the sector in Africa, thereby making it compete favourably with its counterparts in other continents.
Dr. Peterside also highlighted fair multilateral and bilateral agreements, improved well-being, inclusive job creation, Eco-tourism, debt swaps and green ports amongst others as some of the tools and opportunities that abound in the blue economy sector in Africa. He added that the concepts it will bring to Africa ranges from sustainable business opportunities, circular economy, resource efficiency, and conservation of development. All these he said will help the continent actualize the blue economy sector.
“About 70% of the earth resources are underneath the sea and has been in most cases left untapped; almost all the cities in the world begin their development from the sea which shows the underlying importance of the sea to economic and social growth. We must therefore work hard and collaboratively to actualize our blue economy sector in Africa”, Dr. Peterside said.
While identifying, maritime insecurity, criminal activities at sea, climate vulnerability, poor infrastructure among others as factors militating against development of Africa’s blue economy, he assure that NIMASA is doing all it can to curtail the issues relating to criminal activities in the nation’s territorial waterways. We have proposed an Anti-piracy bill which is presently before the National Assembly and would be passed soon. This will enable the Agency prosecute those found in such nefarious activities that is capable of hampering the development of the maritime sector.
Furthermore, the DG called for a budgetary provision for blue economy management as obtainable in other climes and also the creation of an institutional framework for the blue economy sector.
The DG also used the opportunity to urge African nations to provide investments needed to support improved governance and initiatives and assured the NSC that the Agency will continue to encourage collaborations amongst Stakeholders in the industry, as it is the only way that can guarantee the growth, development and actualization of the blue economy.
Earlier in his welcome address, the Executive Secretary of the Nigerian Shippers’ Council, Barrister Hassan Bello, he commended the efforts of the Dr. Dakuku Peterside led Management of NIMASA and stated that within a short time of his appointment, he has been able to transform the sector.
He also described the Agency as a worthy partner and said that the need for the Council to collaborate with NIMASA to drive the blue economy cannot be over emphasized; this necessitated the invitation of the NIMASA DG to come and give the entire Management team of the NCS firsthand information on the concept of the blue economy.
The blue economy in the African context covers both aquatic and marine spaces including oceans, seas, coasts, lakes, rivers and underground waters. It also encompasses a range of productive sectors; Fisheries, Aquaculture, Tourism, Transport, Ship building, energy, bio prospecting, under-water mining and related activities.