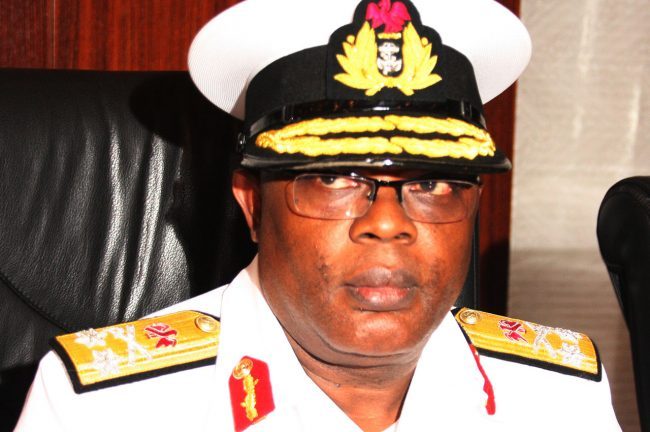 The naval chief disclosed this at a news conference on Tuesday in Abuja as part of activities to mark Navy’s 62nd anniversary celebration taking place between May 23 and June 1.
Vice-Admiral Ibas said the theme of the 2018 Navy Week celebration is “Enhancing an Integrated Maritime Strategy for Security in the Gulf of Guinea.”
Represented by Rear- Admiral Begroy Ibe-Enwo, Chief of Naval Transformation, Ibas said the boats acquired in 2017  had enhanced navy’s capacity to police and surveil Nigeria’s maritime environment.
He said boosting the navy fleet had been a top priority consideration of his leadership.
He added that “it is my great pleasure to inform you that NN concomitantly acquired the 173 assorted boats, including Epenal boats, Rigid Hull Inflatable boats, and Hydrographic Survey boats in the last one year.
“The navy also acquired ships from some foreign countries and complemented local construction of ships and boats.
“In addition, defective NN ships are being refitted at the Naval Dockyard Limited Victoria Island, Lagos and the Naval Shipyard Limited Port Harcourt to ensure availability.
“The NN recently acquired six ocean fast patrol boats from France which will be inaugurated soon.”
Ibas said the navy had also carried out several notable exercises and operations in 2017.
He added that such operations were specifically aimed at checking crude oil theft, illegal bunkering, piracy/sea robbery and illegal fishing, among others.
“Operation Tsare Teku and River Sweep are ongoing operations to address illegalities in the Blue and Brown waters respectively.”
He noted that the maritime exercise had assisted the NN in reducing the menace of piracy and other criminal activities in the Gulf of Guinea since its inception in 2011.
He disclosed that at least 42 vessels had been arrested so far for involving in various illegalities in Nigeria’s maritime domain and were undergoing various stages of investigations for subsequent prosecution.
“Furthermore, NN personnel were involved in various internal security operations in some states of the federation, including Borno, Yobe, Adamawa and Plateau states.
He noted that the navy had been unrelenting in its operations to protect the nation’s maritime environment against all forms of threats, stressing that “in this regard, NN routinely carries out surveillance and patrol of the maritime area with available surveillance systems, ships and helicopters.”
He explained that the navy also upgraded its maritime surveillance equipment, including the Regional Maritime Awareness Capability (RMAC) and the Falcon Eye systems to improve maritime domain awareness.
On activities for the 2018 Navy Week celebration, Mr Ibas said the week would commence inauguration of some projects in the commands such as the Nigerian Navy Military School, Ikot Ntuen in Akwa Ibom, to be inaugurated on May 23.
He noted that special juma’at prayers for the week activities would be held in Abuja area and the commands would hold theirs on May 25.
He said there would be inter-denominational Church service in Abuja and same would be held simultaneously in the commands on Sunday, May 27.
“Additionally, some NN ships will be open to visitors on May 28 in major naval bases at Lagos, Calabar and Port Harcourt.
“The ships will remain open to visitors till Wednesday, May 30, when the 2018 Regional Maritime Exercise (REMEX) will be launched at Naval Dockyard Limited, Victoria Island, Lagos.”
The naval chief said the celebration would round off on June 1 with a Ceremonial Sunset in Lagos.
“The Ceremonial Sunset is a symbolic traditional naval ceremony, which usually marks the conclusion of special events,’’ he said.