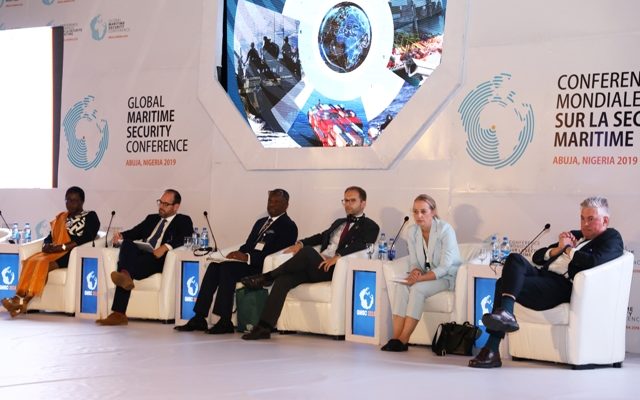 The United Nations Office for Drugs and Crime (UNODC) has scored Nigeria high on efforts and collaborations to tackle maritime insecurity and smuggling of hard drugs in the Gulf of Guinea.

UNODC also applauded Nigeria for enacting a distinct antipiracy law to broadly confront the problem of piracy and crimes on the country’s territorial waters and exclusive economic zone.

The representative of the UNODC Country Director for Nigeria, Mr. Oliver Stolpe, stated these during a press conference on Tuesday in Abuja on the second day of the ongoing Global Maritime Security Conference.

At a separate press briefing, Chairman, Ship Owners Forum, Mrs. Margaret Orakwusi, bemoaned the issue of illegal fishing on Nigerian waters, saying appropriate measures must be applied to stop this for the interest of the shipping industry.

Stolpe stated, “We need to recognise the things that have been done right, that is the Suppression of Piracy Act that was passed by the Nigerian government, which for the first time gives a comprehensive framework to tackle the issue of piracy and, more broadly, maritime crimes. We are on a good path.

“The big issue now is the follow up to that, which is the prosecutions.”

He said the GMSC was a crucial step in the attempt to deal with insecurity in the Gulf of Guinea.

Stolpe, who addressed the press conference alongside the Programme Officer at the UNODC Office in Nigeria, Mr. Giuseppe Sernia, said one of the major challenges in the Gulf of Guinea was the “extremely fragmented” nature of the legal framework regulating the maritime domain. He said, though, there were regional and international frameworks in place, gaps existed in terms of the countries signing on to the conventions and actually putting them into domestic legislations and policies.

He said the Gulf of Guinea was also targeted for trafficking in hard drugs, especially cocaine, by sea, with huge seizures recently in Cape Verde, where almost 10 tons of cocaine were seized, Guinea Bissau, and other countries.

Orakwusi, in her own briefing, welcomed the current efforts to regulate fishing on the country’s waters, but said more needed to be done, especially to control the movement of the proceeds of illegal fishing. “We should also watch what the financial institutions are doing, how monies are transferred from one country to another – proceeds of the crime of illegal fishing – and again monitor the markets,” she said. “Where are they selling these products? One good thing with ocean resources, a prawn can tell its own story, where is it caught. It is just a little analysis and you will get all the information. So that, to me, is an effective way of monitoring illegal fishing,” she added.

The Suppression of Piracy and other Maritime Offences Act 2019 provides a legal framework for the prosecution of piracy and other maritime crimes through the country’s maritime security enforcement agencies: the Nigerian Navy and NIMASA. It fulfils a critical international requirement for standalone legislation on piracy, as against the approach of using the Maritime Operations Coordinating Board Amendment Bill to criminalise piracy.

The law gives effect to the provisions of the United Nations Convention on the Law of the Sea (UNCLOS), 1982, and the International Convention on the Suppression of Unlawful Acts against the Safety of Navigation (SUA), 1988, and its Protocols.