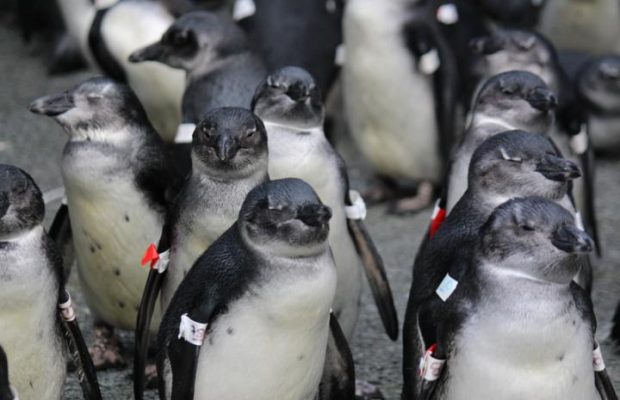 The iconic African Penguin is being pushed to the brink of extinction because of a lack of food.

Recent population declines of the imperilled seabirds are blamed on food shortages caused by shifts in the distributions of prey species and competition with commercial purse-seine fisheries for food.

Numbers of the species, found in three areas along the Western Cape coast, have plummeted by over 60% in the last 30 years and by over 50% in its three most recent generations, according to the Department of Environment, Forestry and Fisheries.

There were more than a million breeding pairs of African Penguins in SA and Namibia over a century ago, but last year a count found a record low of just 15 000 breeding pairs on the SA coast. Around 5000 persist in Namibia.

“The main reason for the ongoing decline of African Penguins in SA is a scarcity of prey, which has led to mortality of birds,” says the department’s recently gazetted draft second biodiversity management plan for the African Penguin.

African Penguins, notes the plan, were formerly the most abundant seabird of the Benguela upwelling ecosystem but, following large declines of the species in the 20th century and a collapse of the local population in the present century, the species is classified as endangered.

Without the implementation of interventions, “it is predicted that the future population along the West Coast will continue to undergo rapid reduction and could be functionally extinct by 2035”.

Along with biodiversity concerns, African Penguins, and other seabirds, are important in regional economies through attracting tourism and in the healthy functioning of ecosystems.

A biodiversity management plan for the African Penguin was gazetted in 2013 because of a rapid decrease of the species at the start of the present century.

The 2013 plan aimed to halt the decline within two years, but despite the successful implementation of many of the actions listed in it, “these aims were not attained and African Penguins in SA have continued to decline.

“Therefore, it’s necessary that the plan be revised and extended to operate over a second five-year period, from mid-2019–2024.

“The main reason for the ongoing decline of African Penguins in SA is a scarcity of prey, which has led to mortality of birds. If the second plan of the management plan is to succeed, it’s crucial this matter be addressed.

“For that, fishing of its main prey items should be precluded around all prioritised colonies and seasonally at feeding grounds while fattening before and after a moult.

“Further, colonies along the south coast should be maintained and, if shown to be safe and viable, bolstered through the release of hand-reared abandoned chicks and captive-bred penguins. In addition, the risk of oil spills must be strictly minimised through, for example, the zoning of shipping and bunkering.

“Given the present small size of the population, colony-specific interventions, such as the management of predation on African penguins, are likely to play a major role,” says the plan.

Christina Hagen, the Pamela Isdell Fellow of penguin conservation at BirdLife South Africa, views the draft plan as an improvement of the first plan.

“It’s a lot more focused on the threats facing the penguins and also focuses more on implementation of actions. The first plan laid the groundwork for many of the actions that are in the new plan.

“The actions address what BirdLife South Africa feels are the most pressing threats to penguins. The lack of food is the highest priority and there are several actions around this in the plan.

“Identifying and then protecting key foraging areas for penguins will be an important part of conserving the species. There are several actions under way already, including an experiment looking at the effects of fishing on penguins by closing the waters around certain colonies to fishing.”

A project by BirdLife South Africa and CapeNature to establish a colony at De Hoop Nature Reserve is a response to the lack of food near existing penguin colonies, she says.

“A growing threat is the expansion at Coega, including bunkering (transfer of oil between ships). Over half of the SA penguin population is in Algoa Bay, so managing those impacts will be very important and is covered in the plan.

“While we will make comments on certain aspects of the plan during this public participation phase, we are generally supportive.

“However, one of the difficulties is the timescale involved. The plan will be in place for five years, which may be too short a time to see the results of the actions taken. In addition, the marine environment is very complex so it is difficult to discern cause and effect directly.

“There are also a lot of stakeholders, organisations and government departments that will need to be brought together to implement the actions. The groundwork has been laid for this through the first plan, but it will still be a challenge,” says Hagen.

The plan notes how penguins are considered “sentinels” of ecosystem health, playing an important role in the functioning of marine ecosystems.

“Therefore, thriving African Penguin colonies will indicate that SA’s marine ecosystems are in good shape, or vice versa. Large decreases in seabird populations, as have been observed for African Penguins and other seabird species in SA, will have detrimental consequences for ecosystem functioning,” it says.

Climate change is a major threat. “It’s likely that environmental change has resulted in a mismatch in the distributions of breeding colonies and prey resources of African Penguins, leading to food scarcity and large decreases in penguin numbers off SA’s west coast,” it says.

“It is thought that changes in sea surface temperatures, atmospheric surface pressure and winds have affected spawning conditions for sardine and anchovy stocks and resulted in a shift in the distribution of these species towards the east of the Agulhas Bank.”

This may have been exacerbated by intensive fishing of sardines. “In the longer term, climate change may decrease the extent of habitat suitable for the species at the northern extent of its historical range.

“As is the case for Bank Cormorants, an increase in the frequency and intensity of storms and in ambient temperatures may reduce the breeding success of birds at low-elevation or unshaded nest sites.”

Recent observations from the Simon’s Town and Robben Island colonies suggest that the increase in the frequency of long periods of high temperatures early in the breeding season may have resulted in an increase in the rate of nest abandonment.

Other threats include oil spills, the loss of breeding habitat, disturbance, predation and disease.

The plan notes how past mortality from oil spills has been “substantial” and may increase if the proposed development of harbours close to colonies proceeds.

“Most of the population is confined to areas that are near existing or planned major shipping routes or ports.”

There has been a dramatic increase in the number of birds oiled since 1990 -30 000 individuals were oiled in two individual oil spills (in 1994 and 2000). “Long-term survival and breeding of these birds have been impaired despite successful rehabilitation programmes.”

Seismic surveys within 100km of breeding colonies have been shown to induce a behavioural response so that the penguins use foraging areas further away from the location of the seismic activities.

“As a result, energy expenditure while foraging significantly increases. Due to rapidly increasing seismic activities planned by the government, this disturbance of and possible detrimental effects on penguins at sea should be managed,” the plan says.

* The public has until November 17 to submit written comments on, or objections to, the draft plan to the deputy director-general of the department by emailing marinespecies@environment.gov.za