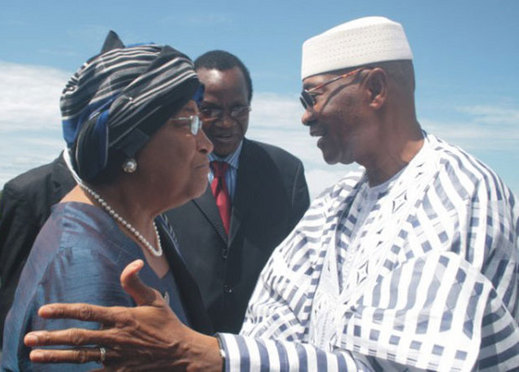 The Commission was established during the administration of the late President William V.S. Tubman more than forty years ago but has been dormant despite attempts by previous administrations in both countries to give it a new lease of life.

A presidential mansion press statement issued late Monday said the Commission will focus primarily on promoting trade and cooperation between the two countries.

The Liberian and Malian leaders have gone a step further to sign a series of agreements aimed at giving full preference to the reorganization of the Commission.

The two leaders also agreed to collaborate in the areas of fisheries, wood and meat, and other commodities in their respective countries. With support from India, Mali is equipped with an assembly plant to produce tractors. The two leaders agreed to provide a market in the region for the products through private partnership.

In a related development, ministers from Liberia and Mali have been holding bilateral talks aimed at strengthening cooperation between the two countries.

At a dinner Monday, President Johnson Sirleaf conferred on the visiting Malian President Liberia’s highest distinction – the Order of the Star of Africa.

At the ceremony held Monday at the Monrovia City Hall, the President lauded the Malian leader for his efforts to improve the wellbeing of his people through sustainable economic development, describing his introduction of reforms to positively impact the lives of Malians as a step in the right direction.

The ceremony also included the ‘gowning’ of the Malian President by traditional leaders under the auspices of the Traditional Council of Chiefs and elders entertained by cultural troupes.

The Malian leader expressed gratitude to the Liberian President and people for the honour bestowed upon him. He recalled the long-standing ties between Mali and Liberia with fondness and promised to work towards solidifying the bond between the two countries through trade, commerce and investment in areas mutually beneficial to both nations.

The Malian leader concluded his two-day visit to Liberia on Tuesday with a breakfast meeting with ambassadors representing permanent member countries of the United Nations Security Council.