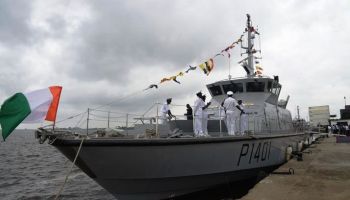 The two vessels with a crew of 15 Chinese nationals were taken into custody on Wednesday in a navy patrol operation.

“The vessels will be kept in dock until a fine is paid,” said the navy source who asked not to be named, adding that the country planned a broader crackdown on those fishing in its waters without a licence.

He did not give any details on the amount of the fine.

West Africa, one of the world’s richest fishing grounds teeming with snapper, grouper, sardines, mackerel and shrimp, is thought to lose hundreds of millions of dollars a year to fishing vessels operating without proper equipment or licences.

But governments are stepping up efforts to crack down on unlawful activities. Earlier this year, Senegal imposed a fine of 600 million CFA francs after two Russian trawlers were seized for fishing illegally, in an incident that stoked diplomatic tensions with Moscow.