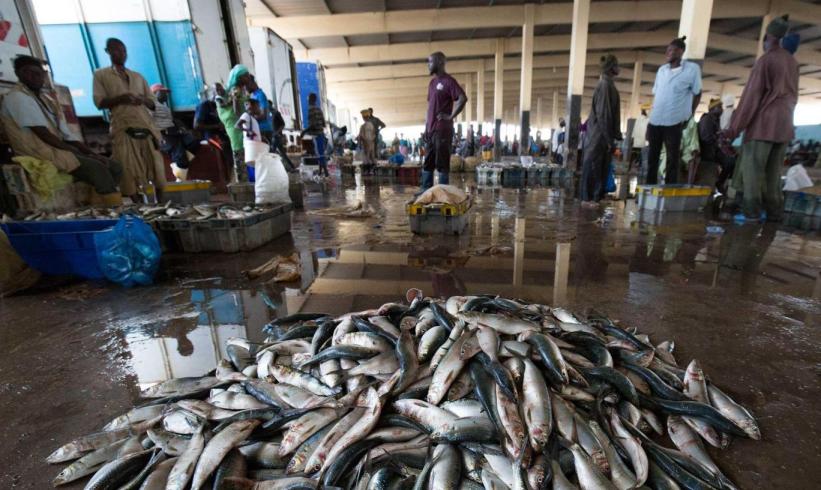 Exclusive: With soaring meat consumption around the world, vital omega 3-rich fish stocks destined for human mouths in western Africa are being snatched by foreign food companies to feed factory-farmed animals – and ultimately the populations of wealthier countries.

“We don’t have gold, or petrol or diamonds, the sea is the only resource that our country has,” says Mariane Tening Ndiaye, a fish trader and head of the women’s fish smoking association, as she takes me around her domain behind the market. Low-strung platforms covered in flayed fish and blackened ovens stretch away into the distance, the air thick with the stench of rotting fish guts.
This site is one of two fish smoking centres in Joal, a coastal town 70 miles south of Senegal’s capital Dakar, part of a fishing industry that employs almost a million people in the country and supplies many more across West Africa with dried fish.
“Five hundred women do business here,” says Ndiaye. “We bring the money into the homes to feed kids, build houses, invest in pirogues (narrow wooden canoes) for our husbands. We are in charge.”
Ndiaye and her fellow fish smokers face an unexpected new threat to their livelihoods, however, from factory farms on the other side of the world.
Walky-talkies hiss on the lapels of security guards nearby, round-the-clock protection for a controversial Russian-backed fishmeal plant that is currently under construction in the town. A dozen fishmeal plants have been built in recent years along the Senegalese coastline, with more planned as entrepreneurs flock to the region in the hunt for cheap sardine and herring, known as sardinella, to cook into fish powder and export as farm animal feed.

“We women are struggling to compete,” says Ndiaye. “The price we have to pay for fish at the port has increased since the fishmeal factories were built.”
Most meat and fish on our supermarket shelves has been reared on a diet that contains small but vital quantities of fishmeal and oil. Accounting for 60 per cent of all finfish (that is, boned and cartilaginous fish as opposed to shellfish) landings in the world each year, the fishmeal and fish oil industry is by far and away the biggest fishery on the planet and yet paradoxically the one which consumers know the least about.
Scottish salmon depend upon fishmeal and oil in their diet, as do chickens and pigs by the billion. For decades, the industry has quietly gone about its own business, boiling up wet fish and producing much smaller amounts of fish powder and oil. The industry has tried hard to dodge public controversy, sourcing “forage” fish, as they are known, from stocks that are deemed inedible or simply unwanted by human populations.
In Peru and Chile it is the anchovy and mackerel, where more than two million tonnes were caught in 2015 alone. In Thailand, fishmeal is sourced from the unwanted by-catch hauled up from trawlers, utilised with a waste-not want-not justification.
With the soaring growth in meat consumption (and consequent demand for cheap meat) around the world, however, fishmeal and fish oil demand has rocketed, and producers are turning their attention to new fish stock frontiers and the omega 3-rich fish stocks of West African waters.
What makes this development so worrying, say critics, is that in Senegal and across the drought-prone region, people need to eat sardines too.
“To truly understand the potential impact of fishmeal, you must get a sense of how important fish are in a country like Senegal,” says Dr. Alessane Samba, Senegal’s leading fisheries scientist. “Growing up in my village, we ate meat twice a year, the rest of the time it was just fish,” he says.
From a cramped office overlooking Dakar port, Dr Samba coordinates an unlikely network of field researchers, fish traders, who call him every day across the country, giving him the daily prices for fish.
“This is by far the best indicator we have for the number of fish being caught,” he says, “and I can tell you, the prices are steadily rising.”
The figures are alarming: the estimated biomass in Senegalese waters has plummeted from 1m tonnes to 400,000 tonnes he claims.
Today the super trawlers – “monsters”, Dr Samba calls them — have been kicked out of Senegalese waters, and the bottom trawlers scouring Senegal’s shallow beds for shrimp and valuable demersal fish have also been brought under a token degree of control by the Senegalese government.
But fish landings are still dropping – and rapidly – despite ever larger numbers of boats trying to catch them. “Our fisheries are in freefall, and they want to build fishmeal factories?” Dr Samba asks.
‘ We’re being priced out of our own food’
For a fleeting moment every afternoon, a global nexus of trade routes converge on a grubby patch of sand in Joal. Horse and carts pound the beach alongside fleets of impatiently parked refrigerated trucks. It is a kaleidoscope of mobile phone ring tones, dripping fish and tense negotiations. West Africa depends on fish markets like this and the traders buzzing within it, providers of protein-rich dried fish for millions.
But just metres from the market, fish scarcity is beginning to bite.
I meet Binete setting out her wares in the nearby alleyway, 12 plump and blood-stained sardines carefully arranged on a half-empty tray at her feet. “Every day the price increases just a little bit,” she told me. “It means that increasingly I can’t afford to buy fish to sell, let alone to eat.”
She is not alone, the World Food Programme estimates that almost 50 per cent of household expenditure in Senegal is already spent on food, part of a regional food insecurity curve that dramatically spikes across the border in neighbouring Burkina Faso, a key market for Senegal’s dwindling sardinella stocks and one of the hungriest countries on earth, ranked just 183 out of 188 in the 2015 UN Human Development Index.
It is this food scarcity that alarms experts. Fishmeal plants in Senegal typically produce just 200 kg of fishmeal powder from one tonne of wet fish, protein that would otherwise be destined for human mouths in one of the hungriest regions on earth.
“It’s just unbelievable,” says Ahmed Diame, a Greenpeace Oceans campaigner, as he considers his country’s fish being diverted to fatten chickens on the other side of the world. “We have one of the richest fisheries in West Africa and yet now fish consumption per person is declining. How can you explain this?” he asks, exasperated.
Economics, competition and a possible revolution?
Sardinella are pelagic, moving where the temperature gradients and plankton streams take them. In West Africa the stock historically migrates each summer between Senegal and Mauritania. In recent years, though, scientists have begun to notice a shift in the fish stock migration as the seas warm, heading further away from Senegal each summer into Moroccan waters.
The problem with this, claim experts, is that both Mauritania and Morocco are scrambling to chase down the valuable sardines and cook them into fishmeal as well.
There are 28 fishmeal plants in Mauritania already, twice the number of Senegal, with a further dozen planned in the next few years, as investors pour into the region to cash in the on the humble sardine. West Africa’s most important fish stocks are in danger of being eaten away for animal feed, with no regional fisheries management policy in place to protect them.
“Put simply the stock can’t cope with this pressure,” says Dr Samba, before adding in a hushed tone, “Without sardines, in a country liked Senegal, there will be revolution.”
Souce: http://www.independent.co.uk/
Partagez