Gambia: Chinese fishmeal plants leave fishermen in the Gambia all at sea 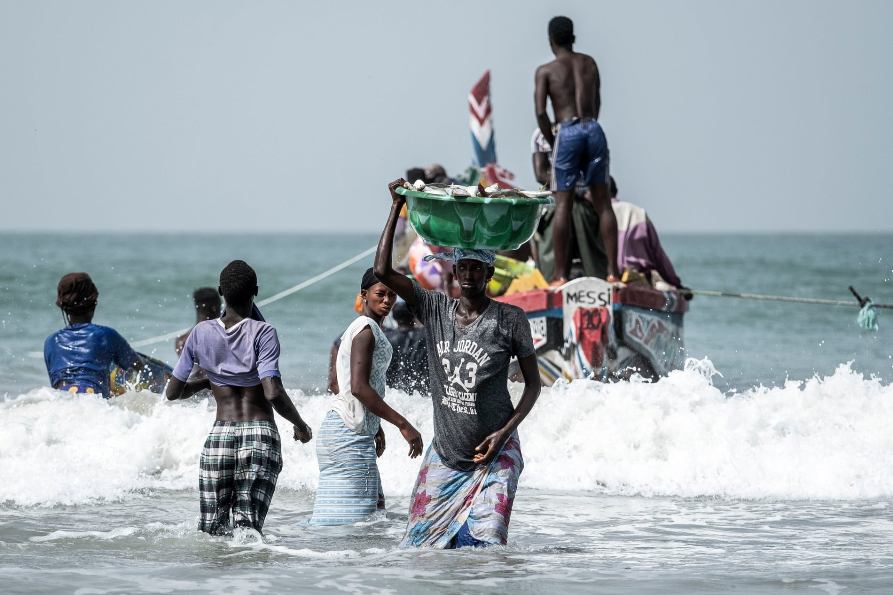 A woman brings in a bucket of fish in Gunjur village, the Gambia. Photograph: Xaume Olleros/The Guardian

Scientists and campaigners warn that factories in coastal villages are wreaking environmental and economic havoc
by Hannah Summers
Before the arrival of fishmeal factories in the Gambia, Musa Duboe would catch red snapper and barracuda to be sold at the local market. But his income had begun to dwindle due to depleted stocks.
Then in 2016 the Chinese-owned fishmeal plant Golden Lead began operating out of the coastal town of Gunjur, increasing demand for fish to export for overseas aquaculture.
“Now work is booming again, as we can sell our catches to both the factory and locals,” Duboe, 33, explains, taking advantage of a rare patch of shade among the brightly hand-painted canoes used by the artisanal fishermen.
“Our net catches all kinds of fish. Sometimes we meet demand with just one catch – other times we need five catches, with a catch being as big as up to 400 bowls of fish. My work is a lot more profitable and I can fully provide for my family, because the factory buys more fish than I could previously sell on the local market.”
While Duboe and other fishermen who predominantly supply the fishmeal plants may be enjoying short-term gains, the forecast for the Gambia’s fishing industry and the community it serves is less rosy.
Overseas business interests and attractive global prices for fishmeal are driving demand for species such as sardinella, and, as a result, are taking a crucial source of protein from the plates of the poorest Gambians while leaving large swaths of the community out of work.
The fishmeal business is wreaking havoc on the environment, local employment, food security and the tourism economy, scientists, Gambian activists and locals have warned.
On the frontline of those losses are local female fish processors who buy from the artisanal fishermen and smoke the fish, or sell it fresh at the local market.

They also supply to a network of third parties who take the fish from the coast to inland markets or for export to countries such as Mali or Ivory Coast.

But with the factories taking the lion’s share of the catches, trade has plummeted for these women and others working in the supply chain.
Matilda Jobe is a 29-year-old fish seller working at the beach in Gunjur, one of the biggest fish landing sites along the Gambia’s 80km Atlantic coast.
Jobe, a widow and single mother, has been struggling to feed her young children since the opening of Golden Lead. With demand pushing up prices, the fish is too expensive, or if the catches are small, the fishmeal factories will take priority.
“Sometimes we go empty-handed, but we keep fighting for our children,” she says. “My husband died some years ago and I need to provide for them. They need a good education so they can do better than us.”
Locals who once enjoyed fish as part of their daily diet are now struggling to afford it. Vast quantities of small fish diverted from the market for human consumption are instead being processed to feed animals and farmed fish.
Fishmeal constitutes around 68% of the feed used for farmed fish, with 5kg of fresh fish needed to make 1kg of fishmeal, according to the Coalition for Fair Fisheries Arrangements.
Golden Lead is one of three Chinese-owned fishmeal plants currently operating out of the Gambia. Two others – the JXYG factory in Kartong and the Nassim fishmeal company in Sanyang – have both re-opened in recent months after temporary closures following complaints about their waste disposal methods.
Members of the community reported to the Ministry of Fisheries in May last year that the eco tourism industry in Kartong was under threat due to the discharge of toxic waste. The JXYG factory, which denies dumping waste in Kartong, was asked to cease operations by the National Environment Agency, but local sources say it was given the green light to continue production following an out-of-court settlement.
Factory owners have promised to bring employment to the Gambia, but because the processing of fish for fishmeal is a simple operation – fish is boiled and minced before being dried – the average plant does not employ more than 30 people.
Dawda Saine, a marine biologist and lead for Gambia’s Artisanal Fisheries Development Agency, says: “It’s very difficult to get any information from the factories about how much fish they are using or fishmeal they produce. They are not providing any data.”
One worker serving the factory in Kartong says the plant processes a maximum capacity of 500 tonnes of fresh fish per day. Speaking anonymously, he says: “My job is to powder the remaining fish that can’t be processed by the machine.”
He has worked at the factory since it first opened in 2017 and earns around 3,000 Gambian dalasi (£45) a month, but has never had a contract. There are seven Chinese workers doing skilled jobs at the factory, while the local workers are employed as security guards and fish transporters, he explained.
Experts warn the production of fishmeal is not only weakening food security in north-west Africa but is contributing to the existing pressures of overfishing in the region.
New research shows stocks of round sardinella, a species that migrates along the Atlantic coast between the Gambia and Morocco, have plummeted due to overfishing.
“The main cause of this increased effort is the development of a fishmeal industry in the region,” explains Ad Corten, a marine biologist who set up the Food and Agricultural Organisation working group on small pelagic fish in north-west Africa.
Sometimes, landings are so big even the fishmeal plants cannot take them, and as a result considerable quantities of fish might be dumped at sea or on land.
Footage uploaded to YouTube shows Gambian fishermen from the town of Tanji protesting against the discarding of sardinella refused by one of the Chinese factories…. Continue reading
Partagez