Ghana: Construction of a New Fishing Harbour At Elmina Begins. 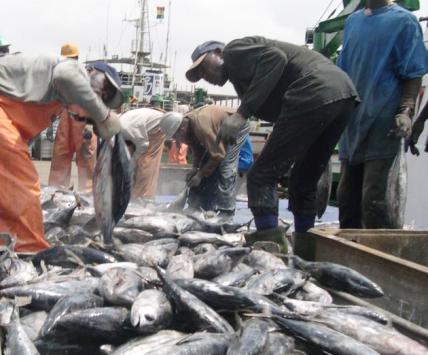 Ghana: Construction of a New Fishing Harbour At Elmina Begins.

Ghana’s President John Dramani Mahama, on Saturday cut the sod for the construction of a $11 million fish processing plant at Elmina in the Komenda-Edina-Eguafo-Abrem (KEEA) district of the Central Region.

The project, to be executed by the Ministry of Food and Agriculture, in collaboration with Expotec International, an Indian Company, would take 18 months to complete.

It will have facilities such as a fish waste processing section, offices, canteen, cold stores and a packaging section.

The 100 metric-tonne capacity plant would be used to process fish to add value to it for export, whilst the waste from the fish would also be processed into fish-feed for the poultry industry.

The ceremony coincided with a special programme organised by the fishing communities along the country’s coastal stretch to observe the one year anniversary of the late President, Professor John Evans Atta Mills.

Representatives of the fishermen from the Volta, Greater Accra, Western and Central Regions attended the programme.

President Mahama said the project formed part of the numerous projects the late President pledged to carry out to boost the fishing industry and gave the assurance that he would endeavour to bring all of them to fruition.

He promised to break grounds for the construction of a fishing harbour at Elmina and Jamestown in Accra before the end of this year.

He said plans were also far advanced to construct modern fish landing bays attached with cold stores and parking lounges for canoe and boats at all the beaches.

Touching on the issue of pair trawling, the President announced that an interim measure had been put in place where fast patrol marine boats on the country’s high seas would check illegal fishing activities.

A Ministry of Fisheries would soon be set up with an enforcement Unit, which would comprise the Navy, Air force and Marine Police to arrest and prosecute trawlers, which fish closer than the expected 30 nautical miles.

This is because, the demarcated zone for artisanal fishing must be respected, President Mahama indicated, and warned that it was wrong for pair trawlers to fish in such zones.

The President promised the fishermen that illegal fishing activities will soon end on the country’s marine waters with the coming into force of the Unit.

Mr Nayon Bilijo Minister of Food and Agriculture in charge of Fisheries, re-echoed plans to provide modern fish landing bays with the requisite facilities for the various beaches, to enhance fish handling and avoid post-harvest losses in the country.

He urged Government to continue subsidizing fishing inputs to keep fishermen in business, adding that, the establishment of a fish processing plant in Elmina  would go a long way to address some of the challenges of fishermen in the Central and Western regions.

He admitted that the activities of pair trawling in the Ghanaian marine waters  was affecting artisanal fishing and attributed the situation to the lack of fishing enforcement unit in the country.

He gave the assurance that a unit will be put in place by September this year to check the practice.

The chief fisherman of Moree, Nana  kwegya, on behalf of the all  fishing communities along the coast expressed gratitude to the President for his concern for the fishing industry and appealed to him as a matter of urgency, to address the problem of pair trawling in the country.

He said the activities of the pair trawlers were affecting their business seriously, with the majority of them being out of business, in addition to their huge debts, through loans they took from the banks.