Togo: Return of Fisheries Activities in Lake Boko in Togo thanks to the Restoration Project of the Said Lake Administered by the World Bank. 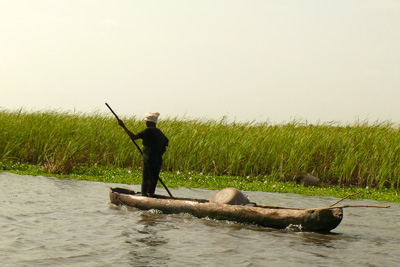 For the past 50 years, severe flooding during the rainy season ravaged the village of Boko in Togo, a fishing community located 75 km southeast of Lomé. Heavy silt buildup blocking the natural flow of water from Lake Boko in Togo resulted in destroyed homes, stagnant water, and a dramatic decrease in fishing activities. Lake Boko in Togo, once known as source of livelihood thanks to its abundant fish stocks, had become a curse for village residents.

“Areas that were once used for fishing had become covered with mud and grass due to silt buildup in the canal. Water could not flow freely and would instead flood the houses located in the lake’s vicinity. Fishing is our main source of income, and we were no longer able to fish there,” notes N’sougan Dosseh, the village chief’s secretary.

Faced with the deterioration of their livelihoods, the village residents decided to take action to restore the lake bed.  With support from the World Bank-administered Integrated Disaster and Land Management (IDLM) project,[i] they established a Village Development Committee (VDC) and mobilized CFAF 41 million or approximately $90,000 in financing to open up the canal bed and remove the silt and invasive plants species.

Women as agents of change

Women played a particularly active role and their contribution to the revitalization of the canal was critical. “You should have seen us women as we pulled on pants and dived into that mud to dredge this canal in order to get the result that you are looking at now,” says Abalo Sodohoin, with a satisfied smile. Ms. Sodohoin is the chair of the canal management committee, an organization established to ensure the maintenance of the canal. Thirteen of the seventeen members of the organization are women.

After four months of grueling labor, the village residents dredged an area measuring roughly 5 km long and 40 m wide to open up the canal bed. “People who had to abandon their homes because of flooding were able to return. This effort helped rally villagers around a common goal— that of reviving economic activities and improving residents’ living conditions,” notes Amidou Morou, the IDLM project coordinator.

Now that the canal has been rehabilitated, economic development can resume. “This large-scale project gave us the tools we needed to combat poverty in our community. Fishing activities have resumed and sugar cane producers along the canal now have more arable land,” explains Claude Anani, a volunteer teacher and vice chair of the Village Development Committee.

“The scale of the work accomplished manually by Boko’s residents in Togo is simply tremendous!” adds Koffi Hounkpè, World Bank Co-Task Team Leader for the IDLM project. “However, a major challenge remains; keeping the canal open by preventing the regrowth of invasive plants. Adequate support is needed to enable the canal maintenance committee to undertake this task,” he notes.

Dredging the canal is just the first stage of a long process to rehabilitate the lake. The IDLM project provided pirogues and established a core fund totaling CFAF 1 million or approximately $2,100, to contribute to the VDC’s fund and finance necessary maintenance works and income-generating community activities.

Boko in Togo’s residents are more determined than ever to maintain the canal. Once a week, residents volunteer to pull out water hyacinths, an invasive plant species that drains oxygen from … Continue reading