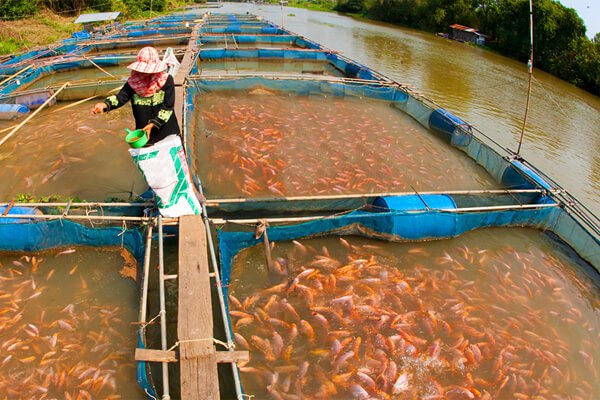 Over N300m worth of fish, owned by famers at Erinwe Village in Ogun State have been washed away by flood. The Ijebu Development Initiative on Poverty Reduction owns the fish farm. Those washed away included matured ones.

The affected farmers, under the aegis of Catfish and Allied Farmers Association of Nigeria explained that the heavy downpour witnessed in Ijebu Ode and its environs on Sunday, July 29 washed away many “ready to be harvested” and mature ones, as well as those still being nurtured to maturity.

Spokespersons of the group, Mr. Sunday Talabi and Pastor Oluniyi Olukoga noted that though flooding is a recurring decimal at the farm, the latest flooding which affected 150 ponds is the worst ever.
“This latest incident is the worst ever experienced in the history of the over 20 years of the farm village and the loss is heavy and colossal,” Talabi submitted.
Chairman of the Association, Ogun State chapter, Pastor Sunday Isoma said: “Places that were usually not affected in the farm village in the past were all swept away, while investments of many farmers were taken away by the ravaging flood.”He added that a meeting with the management of the Ijebu Development Initiative on Poverty reduction to find lasting solution to the yearly problem in the past, came up with the recommendation to dredge the

Eriwe river at the cost of N8m, but the farmers could not afford the said amount.

“We even thought the board will assist us since we pay rent and insurance to them on our business, but they are not forthcoming.”It was gathered that one of the farmers who intended to sell his fish on Monday, July 30 and had invited customers, lost all the fish to the flood.
Fatai Abiodun, Alebiosu Sina and Adebayo Seun broke down in tears, while lamenting the damage the flood did to their farms.
Alebiosu said he lost over N8m worth of fish, having invested proceeds from the sale of his incomplete building and two vehicles belonging to him and his wife.
Adebayo, who lost over 12,000 fishes in four ponds, said he was left with nothing but huge debt.
The farmers are now appealing to Governor Dapo Abiodun, individuals and organisations to urgently “save them from untimely death and huge debt as many will not be able to survive the effect of the disaster on them.”
Partagez