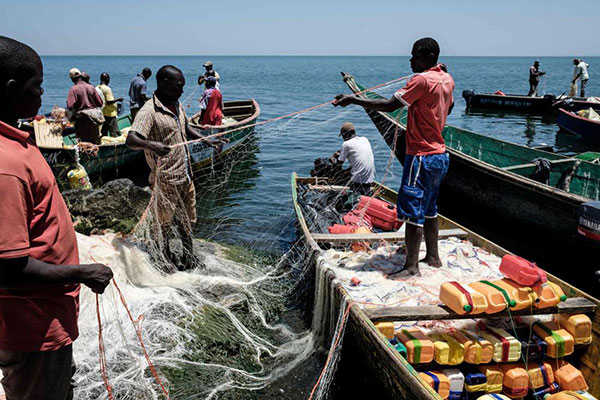 Fishermen preparing their nets on Migingo island which is densely populated by residents fishing mainly for Nile perch in Lake Victoria on the border of Uganda and Kenya. PHOTO | YASUYOSHI CHIBA | AFP

Seven Kenyan fishermen have been detained at a beach in Tanzania after they were arrested by security officials over claims of illegally crossing the border.

The fishermen from Remba Island in Suba North, Homa Bay County, were arrested on Sunday evening during a fishing expedition in Lake Victoria. Their four boats were also confiscated.

The fishermen, who were together with other colleagues, had 21 boats when they set out for fishing. The security officials later released 17 boats but detained their day’s catch.

Homa Bay County Beach Management Units Network Chairman Edward Oremo said the fishermen had captured hundreds of kilogrammes of fish when they were arrested and detained.

He said they were yet to establish details in regard to the arrests.

“Those who were set free said they had not crossed the boundary between Kenya and Tanzania. The security officials took all their fishing gears and fish,” said Mr Oremo.

He said his officers were on Monday investigating the circumstances that led to the arrest of the fishermen.

The incident has once again raised questions on the relationship between the East African countries on boundary issues.

In a recent meeting in Homa Bay County, security and fisheries officials from Kenya and Uganda agreed not to harass fishermen from either country in Lake Victoria as long as they obeyed the fishing laws of the respective countries.

Mr Oremo asked the government to incorporate Tanzania in the deal.