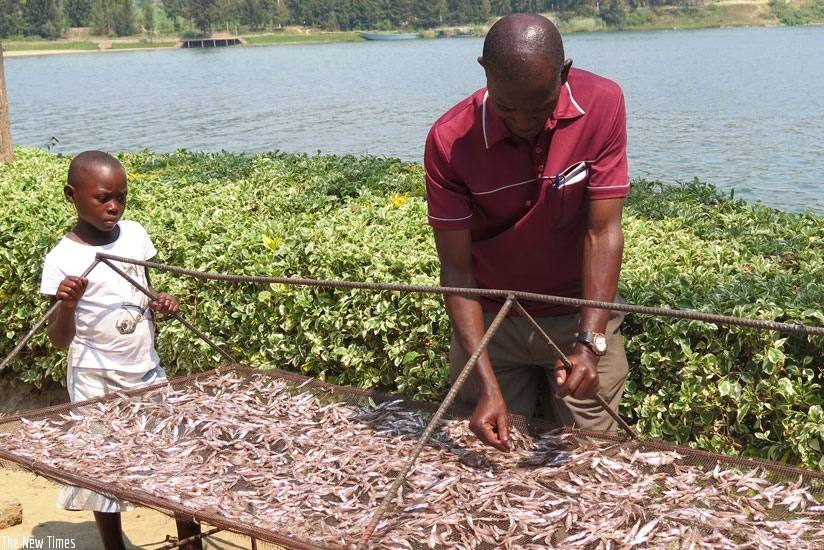 The Government has leased management and operationalisation of Urban Fisheries Products Promotion Centre, a move officials say will ensure proper handling of fish produce, market access and, most importantly, address the issue of lack of enough nutritious fish feeds, which has been a major concern for the sector.

Under the 10-year lease deal, AQUAHORT Export Ltd/AEL, will be expected to put in place a fish feed factory with capacity to produce five tonnes of fish feeds per day.
Speaking to Saturday Times, Theophile Nyandwi, president of Federation of Fishery Cooperatives in Rwanda (FEFICOORWA), said getting fish feeds is a big challenge in the country.
Fish farmers have been importing feeds from Israel and Uganda, with a kilogramme costing about $1.5 (about Rwf1,000).
Cage fishing is more beneficial, especially around Lake Kivu whose water, according to Rwanda Agriculture Board (RAB) and fishery experts, does not have enough natural nutrients for fish growth.
Nyandwi said the initial trials they made indicate that fish from cage weighs 1.5 kilogramme after six months, while about 10 fish would weigh a kilogramme in the same period.
But, he noted, lack of animal feeds has discouraged farmers to embrace the practice.
“That is why we suggested that RAB and the Ministry of Agriculture and Animal Resources look for ways to avail a factory so that farmers get fish feed easily. With a factory in place in the country, farmers can get feeds at a half of that ($1.5) cost a kilogramme,” Nyandwi said.
The factory, which constitutes the first phase of the project, is worth about Rwf300 million, according to Bart Gasana, the manager AQUAHORT Export Ltd/AEL.
Dr Wilson Rutaganira, the programme coordinator of aquaculture and fisheries at RAB, said the equipment for the fish feed factory is already available and that the company that has leased the centre is immediately going to install it such that in three months’ time, the factory will start producing feeds.
The lease
The development follows Tuesday’s Cabinet meeting that approved the lease for the management and operationalisation of that centre, located in the Kigali Special Economic Zone, by AQUAHORT Export Ltd/AEL.
The centre, set up by the Government in 2012, intended to facilitate people to collect fishery produce from various places so that it can be sold in the City of Kigali mainly as the demand of fish increases, according to the Minister of State for Agriculture, Tony Nsanganira.
Speaking to Saturday Times, Nsanganira said the Government considered it necessary to look for a person or company to make use of the centre in a sustainable way.
He said the move is in line with various government initiatives to encourage public-private partnerships.
“Having a centre for fish feeds will boost fish production on the market and motivate fish farming,” he said.
According to Gasana, there was a shortage in fish supply in the country as most of the fish are imported.
He said the new centre’s management has a second component involving fish collection, treatment, distribution and the third part which will include fish processing, packaging and export, with the two phases estimated to take Rwf500 million.
“Basically, what I’m going to do in phase one, is to produce fish feeds because fish feeds constitute the single most important constraint of farmers in the country, in terms of quantity and quality of feeds,” Gasana said.
“We should be able to work out schemes with farmers to provide them with feeds on some agreeable terms, then, we pay them after extracting the money for the feeds,” he added, explaining that this is an incentive for more production.
Ravitalising fish production
Rwanda imports 15,000 tonnes of fish per year, according to RAB’s Dr Wilson Rutaganira.
He added that Rwanda has the lowest per capita fish consumption in East Africa and sub-Saharan Africa, with 2.3 kilogrammes of fish per person per year.
“We want at least to reach 6.7 kilogrammes per person per year. And in that case we shall need around 112,000 tonnes of fish per year,” he said.
In March, 2016, East African Legislative Assembly (EALA) presented a report that stated that the East African Community (EAC) citizens consume less fish which is far below the World Health Organisation (WHO) recommendation of 25 kilogrammes per person per year.
Per capita fish consumption for Burundi is 3.6 kilogrammes, Kenya 3.45 kilogrammes, Rwanda 2.3 kilogrammes, Uganda 10 kilogrammes and Tanzania 8 kilogrammes.
Rutaganira said the Government is encouraging farmers and investors to venture into fisheries, mainly cage fish farming, because it is a profitable business as it offers more produce through provision of feed to fish.
In a bid to make the most of water dams, Rutaganira said they want to stock dams that are currently used for (rice) irrigation with tilapia and catfish so that they not only provide water for irrigation but also be productive sites for fish.
Figures from the ministry indicate that Rwanda’s fish production increased from 9,117 tonnes in 2007 to 30,000 tonnes in 2015.
By 2020, Rwanda projects to produce 155,000 tonnes of fish.
editorial@newtimes.co.rw
Partagez