Nigeria: Consultant advises fish farmers to use locally made feeds 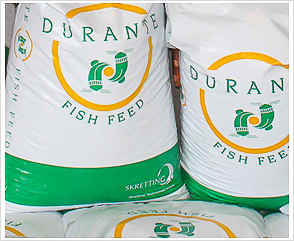 An Agriculture Consultant, Michael David, has advised fish farmers in Nigeria to adopt the use of locally made feeds instead of depending on imported fish feeds.
David gave the advice on Wednesday during a Fish Feed and Management Workshop held at the International Institute of Tropical Agriculture (IITA), Ibadan.
The workshop was organised by American Soyabean Association (ASA) and Transforming African Agriculture Technology (TAAT Aquaculture Compact).
The consultant wondered why fish farmers would continue to import fully compounded feeds, when Nigeria could now produce more quality feeds.

According to him, companies in Nigeria now have the capacity to produce better feeds capable of creating more profit margins for fish farmers.

“The feeds imported are good, but the local feeds produced in Nigeria are much better. “Fish farmers using locally made feeds have better chances of making more profit than those using the imported feeds,’’ he said. He, however, called on government at all levels to do more by creating enabling environment for fish farmers to strive, adding that the private sector would rise if governments would effectively play its roles.

Prof. Bernadette Fregene, Leader, TAAT Aquaculture Compact, said the organisation was saddled with the responsibility of developing low-cost feeds that would lead to the production of fast growing and disease resistant fishes.

Fregene said that fish feed contributes 60 to 80 per cent of the operating cost of fish farming; hence the need to reduce the cost of fish feeds in order to break even.

“If a farmer feeds his fish with imported branded fish feeds, such a farmer may not be able to get higher profit margin compared to those feeding theirs with locally made fish feeds. “The plan of Aquaculture Compact is to work with local farmers that grow maize, cassava, soya bean and groundnut and see how we can make use of their products in making fish feed,’’ she said.

In his remarks, Chris Slemp, Programme Manager, ASA said the workshop was to demonstrate and present the results of local feeds to fish farmers.

“It will also help to see some of the ways the association can work with local aquaculturists and other stakeholders to improve local production,” he said. (NAN)