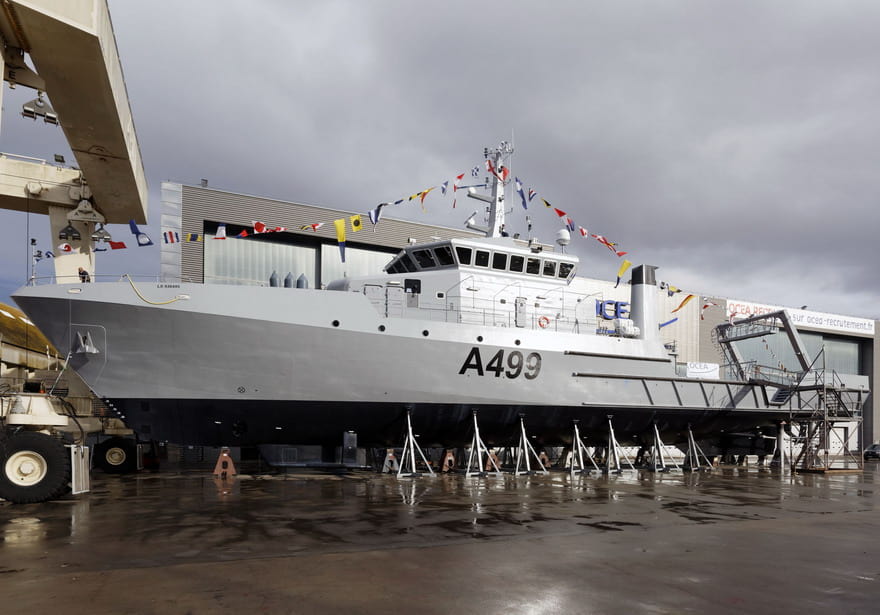 The Nigerian Navy has taken delivery of the purpose-built survey vessel NNS Lana at the Ocea shipyard in France.

The vessel was handed over during a ceremony in Saint Nazaire on 15 April. Speaking at the Flag Transfer Ceremony, the Minister of Defence, Major General Bashir Magashi (rtd), represented by the Chief of the Naval Staff, Vice Admiral Awwal Gambo, stated that the new vessel was conceived as a replacement of the previous NNS Lana, a survey ship that was decommissioned about ten years ago.

He said that survey services and charting waterways play a crucial role in ensuring safe navigation as well as delivery of maritime security. Hence, NNS Lana will not only enhance the safety of Nigeria’s maritime environment but the ship will serve as a critical component in the projection of naval power for enhanced maritime security in the Gulf of Guinea. It will also play a critical role in the protection of maritime resources and preservation of law and order at sea, thus contributing significantly to the promotion of global maritime commerce.

Gambo noted that the acquisition of NNS Lana brings to 18 the number of Ocea platforms in the Nigerian Navy’s inventory and said the company was recently awarded the contract to construct a 35 metre hydrographic boat to complement the NNS Lana.

Construction of the Offshore Survey Vessel (OSV) 190 Mk II NNS Lana (A499) commenced in December 2019 and the project was divided into four major milestones which were: the completion of the deck moulds, completion of hull blocks, hull assembly on the main deck and the delivery and installation of the main engines at the shipyard. The ship was launched on 24 September 2020 at Les Sables d’Olonne, France.

The NNS Lana is designed and purposely built to enable the Nigerian Navy to conduct hydrographic and oceanographic surveys. It is also capable of conducting geophysical studies, search and rescue operations as well as patrol duties. The vessel is equipped with survey equipment as well as a 7.6 metre surface vehicle for shallow water surveys. Survey equipment includes a deep water multibeam echosounder; a single beam depth-water sounder; side scan sonar; current meter; and equipment for the sampling, storage and analysis of water, fish and sediment.

The NNS Lana has an Automatic Weather Station (AWS), wet and dry laboratories, scientific and technical workshops as well as operating and processing rooms for survey data. Machinery includes two MTU engines, three CAT main generators/one emergency generator, electric propulsion system and other auxiliaries. The electric propulsion, which is operated at survey speed, is particularly installed to minimize distortion of data due to machinery noise. The 60 metre long ship has a maximum speed of 14 knots and a capacity of 50 crew, the Nigerian Navy said.

Crew training on the vessel commenced in January 2021 and ended on 12 April 2021. The Nigerian Navy said the change of flag ceremony marks her readiness to embark on her maiden homebound voyage to Nigeria. NNS Lana is expected to join the Nigerian Navy Fleet in May 2021.

“It is envisaged that the rebirth of NNS Lana would afford the Nigerian Navy Hydrographic Department the leverage to successfully and systematically conduct hydrographic surveys and charting of Nigeria’s waters. It would also afford Nigeria with the opportunity of keying into the General Bathymetric Charts of the Oceans (GEBCO) Seabed 2030 project and the Global Multi-Resolution Topography (GMRT) synthesis project which would ultimately facilitate Nigeria’s accomplishment of its obligation under SOLAS Convention in accordance with President Muhammadu Buhari’s deliberate and sustained policies on maritime safety and security,” the Nigerian Navy said.