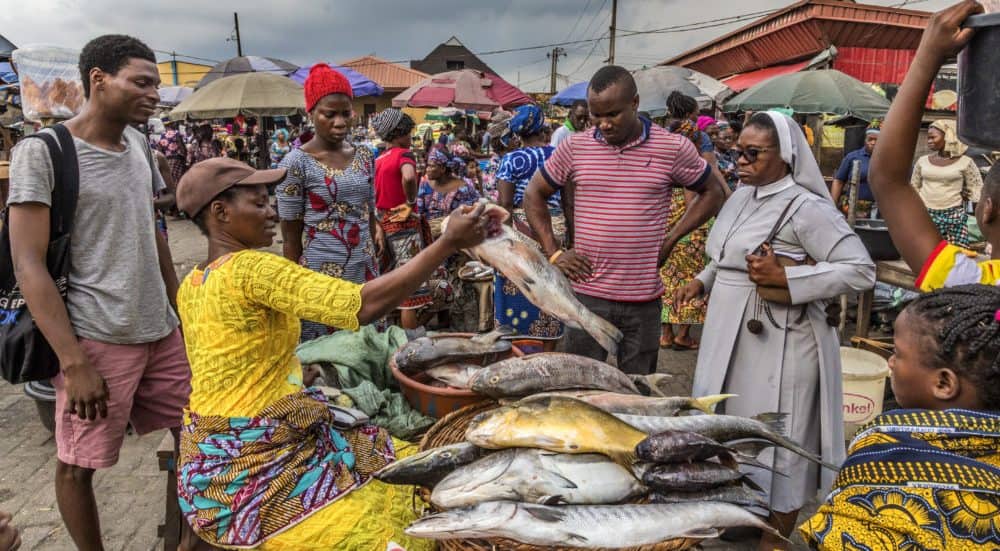 From African waters to China and back again, over half the fish on Nigerian tables is imported

Makoko: the fishing community running out of fish

There is a legend about the neighbourhood of Makoko. It holds that birth in the “world’s largest floating slum” is celebrated by the father throwing his newborn into the Lagos lagoon. If the infant floats it is embraced by all. A baby that drowns is illegitimate and its mother must be banished from the community. “But all babies float,” is a refrain you hear, often accompanied by a mischievous smile.
Although a terrifying myth, it defines the lagoon’s importance as the linchpin of life in Makoko, where residents eke out a living from the polluted waterway snaking through Africa’s most populous city of around 20 million people.
On a cloudy Monday morning, Jacob Lodun, 20, readied his boat for a 12-hour slog on the water. A fisher born in Makoko, this has been Lodun’s daily routine since he was nine.
Back then he and his father would return home from a trip with scores of catfish and a heap of smaller species. Some would be cooked up in pepper soup while the rest went to early morning markets.
“Now we don’t get any fish to kill,” he said. “The fish are running further away.” Sat in a dugout canoe with no outboard engine, he is unable to chase them.
“To buy a motor is around 500,000 naira (US$1,390),” Lodun shrugged – more than triple his monthly income.
Lodun’s predicament points to a much bigger problem facing Nigeria’s 190 million people. The coastal nation is marine-rich but over half the fish served there are imported from countries like the Netherlands and, increasingly, China.
At a time when growing evidence suggests warming waters are pushing fish further from the West African coast, the fishing grounds of developing nations like Nigeria are today some of Asia and the EU’s most targeted. Lack of investment in the local fishing industry has compounded the problem.
Looting Nigeria’s seas
In 2018, the Nigerian navy declared the country was losing US$70 million annually to Chinese trawlers fishing illegally in its waters. Going in the other direction, China exported roughly US$42 million worth of fish to Nigeria in 2017, more than double the year before.
Nigeria is the fourth largest importer of fish. Foreign imports plug a 2 million metric tonne supply gap to a growing population predicted to exceed 300 million by 2050.
“Coastal communities are fighting not only illegal fishing or overfishing, they also have to suffer from the impact of climate change,” said Ifesinachi Okafor-Yarwood, a maritime security researcher at King’s College London.
“Officially Nigeria does not have any fishing arrangements with distant fishing nations such as China or the European Union. But they are able to fish in Nigerian waters illegally because maybe they have arrangements with [the nearby island nation of] São Tomé and Príncipe so they have a reason to be at the border,” she explained. Around 34 ships fish for tuna in the waters of São Tomé under a Fishing Partnership Agreement with the EU. Two years ago, the nation signed its first fisheries agreement with China.

A report from the Overseas Development Institute used satellite tracking to monitor the methods of exploitation used by foreign fleets within the stretch of water from Senegal to Nigeria. It revealed fishing boats commonly transfer catches to other vessels in order to flout quota regulations. Catches are also transported via container ships that are subject to less stringent checks. Vessels from China, the Netherlands and Spain were identified.

Okafor-Yarwood studied Nigeria’s fisheries in 2015. “The department of fisheries cannot engage in pursuit because they do not own [an effective] patrol vessel,” she said. Their vessels have a range of no more than 200 nautical miles.

“The navy are trying, but their vessels are derelict… Then you find corrupt personnel taking backhanders to let certain things slide.” This includes fishing with finer-mesh nets to catch more fish.

In December 2018, the Nigerian government approved the purchase of two patrol boats for the department of fisheries “to monitor unreported, unregulated and illegal fishing by Chinese vessels”, according to local media outlet the New Telegraph. But Okafor-Yarwood is worried that the vessels will be manned by the navy, which has no expertise in collecting evidence of fisheries crimes.

Fresh fish being frozen out

In the nineteenth century, Makoko was a tiny fishing village in the growing trading hub of Lagos. Economic dreamers from Nigeria’s coastal states and neighbouring countries journeyed to the area in search of wealth. But short on affordable land, they expanded onto water.

Today, more than 100,000 people call this stretch of water home. Their stilted shacks, a testament to Lagosian ingenuity, are considered illegal by the Nigerian government.

Located by the side of Nigeria’s most famous slum is Asejere Makoko fish market. On a Thursday evening, before the sun sets over Third Mainland Bridge, the ringing of commerce in this sprawling market can be heard from afar as journeymen, businesswomen and students buy their evening meal. Croaker, mackerel, tilapia and sharp-toothed barracuda are piled unceremoniously in plastic buckets.

Fishwives on the lookout for buyers slice and dice fish caught earlier by their husbands, while wheelbarrow boys carry assorted livestock parts, hollering their presence as they carve a path through the crowds.

Many of the fish caught, filleted and sold in Asejere, are destined for a stockpot of obe eja tutu (Nigerian fresh fish stew) and have come from the nearby ocean.

But 18-year-old Janet Hunukon has no fresh fish to flog. She is more concerned with enticing customers down a concrete alley nestled in the market’s belly where her ice block coolers sit full of frozen fish.

Farmed Chinese tilapia is popular because it is cheaper and more profitable than locally-caught fish. “We make more money from frozen,” said Hunukon. “If you buy a carton for 8,500 naira (US$24) you can sell it for 12,000 naira (US$33).”…. Continue reading