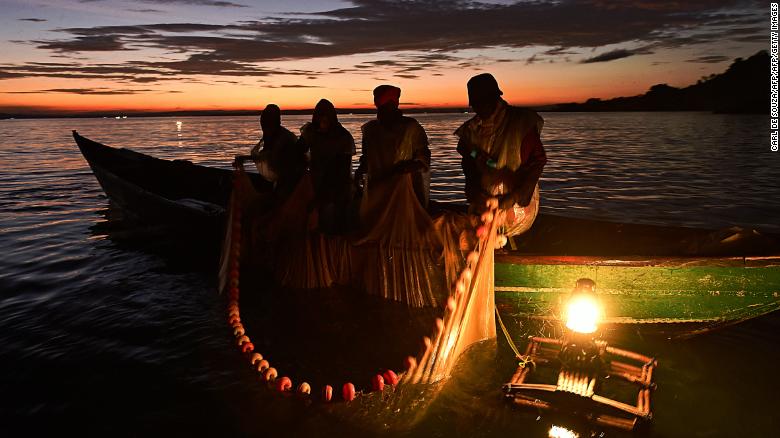 Kenyan fisherman pull up their nets in the early morning as they fish on Lake Victoria.

(CNN) With nets in hand and the boat’s motor chugging along on still waters, dozens of fishermen set out to Lake Victoria, Africa’s largest lake, at the crack of dawn.

It’s a scene that’s been repeated for generations.
Fishing is the mainstay of lake-side communities in Kenya. It has fueled the economy and provided employment for decades, but these days overfishing, a lack of infrastructure and cheap Chinese imports have hit the industry hard.

“In the last 20 to 30 years, perch and tilapia catches have declined 60% to 80% throughout this region,” said Joseph Rehmann, co-founder and CEO of Victory Farms. At the same time Kenya’s population has roughly doubled to nearly 50 million. 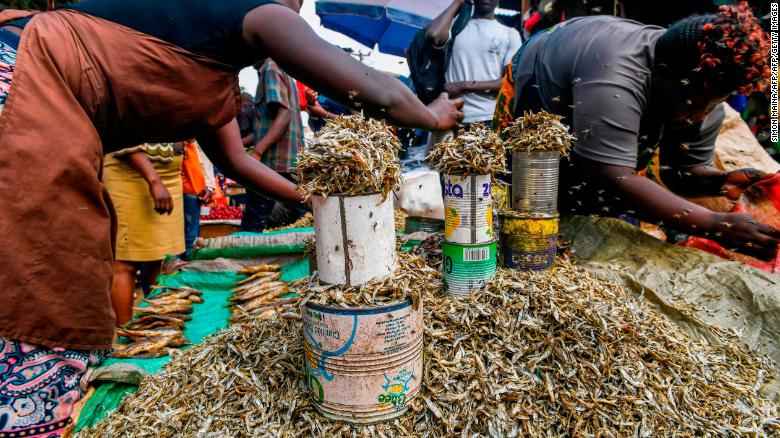 Kenyan fisherman Charles Otieno told CNN: “It’s a trend that’s been happening for a long time.”
Kenya’s fish stocks have been ailing and its main competitor is China, one of the world’s largest economies and leading fish producers.
The increased demand from Kenya’s fish-hungry population means the country is relying on frozen farmed imports.
“We know that the demand in Africa is very big,” Ling Wang, executive vice president at agricultural firm Baiyang Investment Group, which exports to Kenya, told CNN.

In 2016, China exported roughly $30 million of fish to Kenya — double the year before.
“It’s a good thing that we have fish coming in to fill in the gap, the deficit that we have. But on the other hand, we have to compete in terms of production and either lower the cost or increase our volumes so that we can avail fish to our communities,” said former Kenyan Fisheries Secretary Charles Ngugi, who now runs his own fish farm.

Despite China being thousands of kilometers from Kenya, intensive, large-scale farming, and a willingness to keep prices low, even at a loss, means Chinese fish are often considerably cheaper than local offerings.
“If you can get a fish from China, one piece is selling at 150 shillings ($1.5) per kilo while we sell at 400 shillings ($4). It is a very big challenge because people will always go with the cheaper things,” Kenyan fisherman and trader Maurice Muma told CNN.

Kenya’s fishing industry has started looking to fish farming to increase competitiveness with Chinese companies.
Victory Farms, is fish farming enterprise based in Kenya, was founded in 2015 and harvests 80 to 100 tons of fish per month.
“The Kenyan fisheries of the regions where we operate is currently harvesting two tons per year from hundreds and hundreds of fishermen, whereas at Victory Farms we are able to pull five to 10 tons on any given day,” Rehmann said.
However, industrial fish farming has been criticized because of the negative impact it can have on the ecosystem, health and the environment, if not done sustainably.
Victory Farms says it is committed to farming fish in the same water for years to come.
However, it is likely to take more than fish farming to solve Kenya’s fishing deficit. Unlike China, Kenya has to import most of its fish feed.
Additionally, Kenya’s fishing industry lacks a cold chain infrastructure — a supply chain, from source to sale, that keeps fish fresh and cool.
“The quality of the fish will be degraded by not being properly preserved,” Rehmann said.
An inadequate power network is also preventing the cold chain system from working.
“Ice needs power and power is not, let’s say, consistent in this part of the world,” said Steve Moran, co-founder and COO of Victory Farms.
While the heyday of Lake Victoria’s fishing boom in the 1980s and 1990s is a way off, better environmental protections and infrastructure could help restore the fishing industry.
“This lake is presently undeveloped, but as it begins to develop environmental protection — keeping diseases out, keeping foreign fish out is a very important part of the long-term sustainability of aquaculture,” Rehmann said.