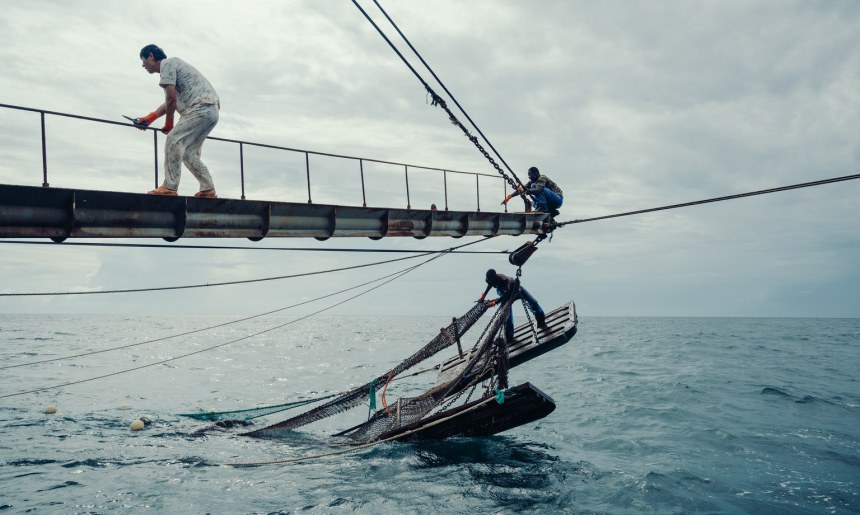 Yuyang Liu stood aboard a Chinese trawler bobbing off the coast of Guinea-Bissau not long ago, trying with all his might to keep his breakfast down. The tossing of the sea made him woozy, and then there was the fish spilling out of the enormous net the crew hauled in. “It’s very wet. And smells not good. Really. It’s terrible,” he says. “Definitely the smelliest.”

The ship, known as Fu Yuan Yu, is one of more than 400 Chinese fishing vessels trawling the coast of West Africa, pulling some three million tons of fish from the sea each year. Few things so clearly represent China’s influence in the region. “If you want to see how China is expanding power in West Africa, you have to get on board and see how they fish,” says Liu, who spent six days aboard one of these ships for his series Drifting in West Africa.
China all but exhausted its fisheries by the mid-1980s and set off for more bountiful waters. The east-central Atlantic, with its healthy stock of herring, sardines, tuna, and other fish, was an attractive destination. Today, China operates 2,000 fishing ships worldwide, more than any other country and 10 times as many as the US. A portion of that fleet roams the waters west of Africa, hauling in more than $400 million worth of fish each year. The United Nations says 50 percent of the region’s marine resources are overfished.
Senegal, Mauritania, and other nations welcome foreign fleets because they bring money. Many nations lack the management systems needed to effectively track and regulate those fleets to ensure everyone operates legally, and others see their efforts to protect their fisheries hobbled by corruption. In 2015, Greenpeace found 74 Chinese vessels illegally fishing in the region. Of course, the problem is hardly limited to China. Russia, Spain, Japan, and others fish there, too. “China isn’t special. It stepped in where other countries already are,” says Dr. Daniel Pauly, the principal investigator at the Sea Around Us Project at the University of British Columbia. “They operate illegally, bribe politicians, and threaten observers on board not to report them. But the European countries have done the exact same thing.”
Greenpeace sent Liu to document Chinese vessels and their impact on local fishers last year. He started in Nouadhibou, Mauritania, where Chinese workers run 10 fish meal factories, crushing sardines into animal feed and shipping it to China. Liu photographed for a week there before flying to Senegal, where he spent a week aboard a Chinese trawler and one day aboard a Senegalese boat.
The trawler carried a crew of 20–seven Chinese joined by 13 locals—who worked 20-day stints. Every few hours the men reeled in the net, and on a good day they’d catch 22,000 pounds of fish. The Senegalese operation, with 40 men and two boats, pulled in a relatively paltry haul of mostly sardines. At this rate, their haul, along with everyone else’s, will only get smaller.