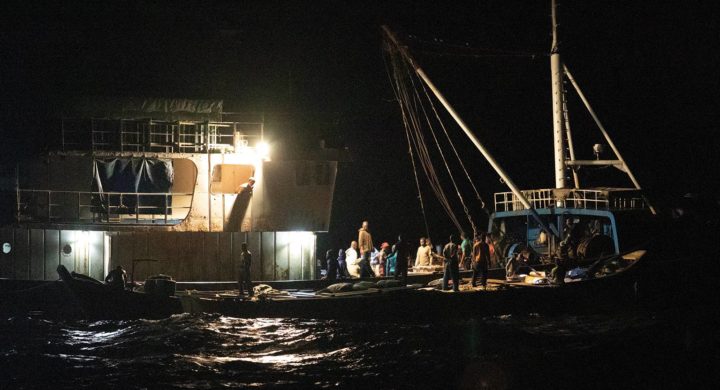 The Lu Rong Yuan Yu 956, a Chinese vessel operated by Rongcheng Ocean Fishery Co. Ltd., has reportedly been re-licensed to fish in Ghana, in spite of failing to pay its fines.

The Lu Rong Yuan Yu 956 was initially fined USD 1 million (EUR 847,000) in 2019 by Ghana using illegal nets. After that, the vessel was caught fishing in Ghana again despite having not paid its fine, and was then subsequently impounded and fined a second time in May of this year.

In all instances, the vessel was found to be using illegal nets that were catching sizes below the legal minimum, allowing it to take fish that were below a legal landing size. In addition, the vessel was only authorized to catch bottom-dwelling species, but significant amounts of pelagic species were found on board.

According the Environmental Justice Foundation despite the multiple fines, and a complete lack of payment of those fines, the vessel has been licensed to fish again while it awaits a further hearing. The licensing raises concerns, given the historical collapse of Ghana’s sardinella landings in recent years.

“No one wins if we exploit our oceans to the point where fish populations collapse,” Environmental Justice Foundation Executive Director Steve Trent said in a press release. “To safeguard both marine ecosystems and the livelihoods of fishers, China and Ghana must work together to prevent cases like this from happening again.”

Ghanaian fishermen have been decrying the arrival of Chinese trawlers in local waters, with the majority of the industrial fleet in the country linking back to Chinese ownership. Ghana is not alone, fishermen in Senegal and also in Liberia, have opposed licensing for Chinese-owned trawlers.

The EJF is calling for Ghana to enforce its illegal fishing deterrents, given the vessel’s seeming indifference to being fined.

“All cases of illegal fishing in Ghana must be treated rigorously, with sanctions severe enough to be deterrent, and full transparency regarding how the process is conducted,” Trent said. “Eradicating illegal fishing is eminently achievable and benefits us all.”