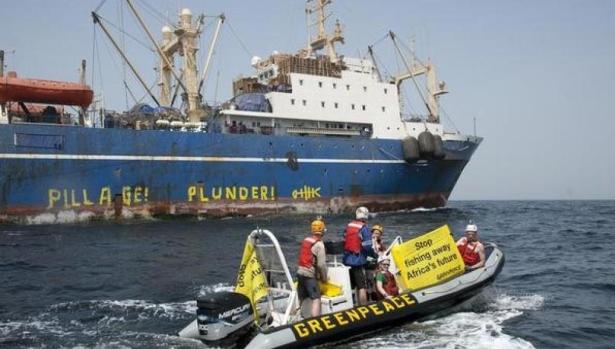 Illegal fishing activities by some foreign vessels in the country’s marine territory are denying the state more than $50.7 million annually.

The activities, which border on catching small fishes and selling them at sea at ridiculous prices to canoe fishermen, is also contributing to dwindling fish stocks and catches which have plagued the local fishing industry for the last 10 to 15 years.
The practice, referred to as transshipment, locally known as ‘Saiko’, involves industrial vessels selling their unwanted catch to canoe owners on the high seas.

The illegal activities of the industrial vessels have led to a drop in the income of artisanal fishermen by as much as 40 per cent in the last decade.

The fish is usually frozen into slabs by the vessels while they are on the high seas and later offloaded to canoe fishermen whom they meet at sea.

Most of the industrial vessels engaged in ‘Saiko’ are linked to foreign owners, a situation which contravenes Ghana’s maritime laws.

This came to light at a regional dialogue on ending ‘Saiko’ fishing in Ghana.

Non-governmental organisations (NGOs) in the fisheries sector which put the dialogue together included the Environmental Justice Foundation (EJF), Hen Mpoano, the Ghana National Canoe Fishermen Council (GNCFC), Friends of the Nation, Care International in Ghana, Oxfam in Ghana, the Livestock and Fisheries Chamber and the Cerath Development Organisation.

The dialogue, on the theme: “End Saiko now”, was aimed at building consensus and getting the government and stakeholders in the fisheries sector to commit to end the practice.

The Director of Hen Mpoano, Mr Kofi Agbogah, said the destructive fishing practice, which was being driven largely by Chinese trawlers, was having a devastating effect on Ghana’s over-exploited fisheries.

He said a study by the EJF and Hen Mpoano, titled: ‘Stolen at Sea’, estimated that “90 per cent of industrial fleets in Ghana’s marine are linked to Chinese owners”.

He said it would take all stakeholders to find a solution to the phenomenon which had, over the years, developed into a lucrative industry, with industrial trawlers targeting species including severely depleted small pelagics, such as sardinellas and mackerel, meant for artisanal fishers.

He said by law, the trawlers were supposed to target demersels, which are sea bottom dwelling species.

“The catches, which are often juvenile fish, are bought by canoe operators and sold to the local markets. This practice has severe implications for Ghana’s artisanal fishing sector, which is critical to food security and provides significant jobs for about 10 per cent of the Ghanaian population.

“We now import herrings and other fishes from Morocco and other places, all because of this illegal practice. It is depressing; something is wrong. We must not wait for this to get out of hand,” Mr Agbogah said.

‘Saiko’ is prohibited under Ghana’s fisheries laws and attracts fines of between $100,000 and $2 million, with the minimum fine increasing to $1 million where juvenile fish is involved or prohibited fishing gear is used.

Mr Agbogah said the ‘Stolen at Sea’ study also established that 100,000 tonnes of fish was caught and sold by industrial trawlers to canoe owners in 2017.

“The value of the fish sold at sea was between $40.6 and $50.7 million and between $52.7 and $81.1 million when it was sold to the local market. The ‘Saiko’ industry provides direct employment for up to 1,500 crew members, watchmen and hustlers at the Elmina, Apam and Axim landing sites,” he said.

On the other hand, he said, the artisanal sector provided direct employment for 100,000 fishers across 292 landing sites.

He said the specially built ‘Saiko’ canoes that ferried fish from the trawlers to the ports carried 450 times the average catch of traditional fishing canoes.

The practice, he said, dated back to the 1970s when Japanese fishermen used the term ‘saite’ to describe the “bad or rubbish” fish that their trawlers discarded but local artisanal fishers who said the catch was of value insisted it was ‘saiko’, meaning “good or useful” fish.

Subsequently, it developed into an informal trading system where unwanted fish caught by industrial vessels was exchanged at sea for goods such as oranges and water.

The Board Chairman of the Fisheries Commission, Mr Emmanuel Mantey Mensah, said ‘Saiko’ was an illegal and unreported fishing practice and called for an urgent need to eliminate it to secure the sustainability of the fisheries industry.

“It is in the interest of all stakeholders to find a solution to the menace,” he said.

The Ghana Industrial Trawlers Association (GITA), Mr Mensah said, had written to the Fisheries Commission, indicating that it had suspended the transshipment practice.

An audit conducted by the Fisheries Commission showed that the gear, such as fishing nets, used by the trawlers was not the legally acceptable one.