Ghana loses US$50 million through illegal fishing in 2017 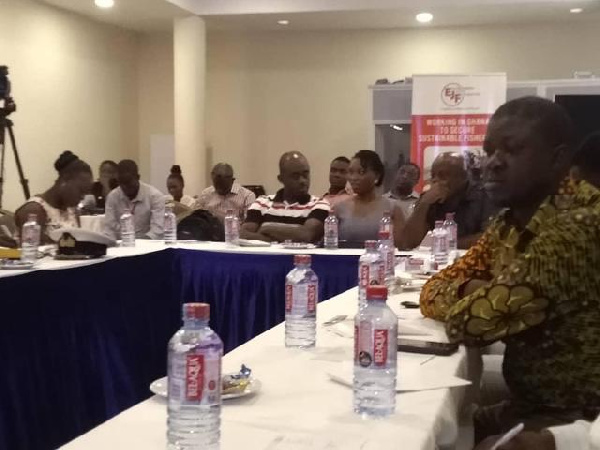 A research conducted into the activities of illegal fishing practice, popularly called ‘Saiko’ on Ghanaian ocean has revealed that Ghana lost between US40 and US50million Dollars in 2017, involving 100,000 metric tonnes (MT) of fish.

The study represented the first comprehensive attempt to estimate the volume and value of fish landed through saiko, which helps to understand the ecological and socio-economic implications of the practice.

Saiko is the local name for illegal and unreported fishing practice in Ghana, where industrial trawlers transfer frozen fish to specially-moulded canoes on the high seas. It allows industrial trawlers to effectively steal the fish from small-scale fishers before selling them back to the local communities at a profit.

Currently, saiko is prohibited under the country’s fisheries laws, attracting a fine between US$100,000 and two million dollars with the minimum fine increasing to one million dollars where catches involved juvenile fish or use of prohibited fishing gears.

The research was conducted by the Environmental Justice Foundation and Hen Mpoano, both environmental non-governmental organisations with interest in protecting the country’s natural resources and ensuring their sustainable management.

Mr Kofi Agbogah, a Director at Hen Mpoano, presenting the key findings of the research at the launch of the report in Accra on Monday, said the practice had metamorphosed into a lucrative industry, with 90 per cent of the trawlers owned by foreigners; especially Chinese and Koreans, depleting fish species including small pelagics such as sardinella and mackerel with impunity.

He noted that the saiko business, over the year, had severe implications on the artisanal fishing sector, which was critical to the country’s food security and provided more jobs than what the former could offer.

The 30-page report titled: “How illegal ‘Saiko’ fishing is fuelling the collapse of Ghana’s fisheries” provided insight into activities of the illegal syndicate, who continued to plunder the country’s fisheries resources.

Mr Agbogah observed that those foreigners mostly operated with licenses secured by Ghanaian trawlers and after succeeding in exploiting the country’s fish stock, repatriated the earnings through forex bureaus to their home countries at the expense of the local artisanal fishers.

“Although saiko activities are widespread, there is a very low risk of arrest and sanctions with cases often settled through “opaque” out of court settlement processes. In addition, most of the industrial vessels engaged in saiko are linked to foreign beneficial owners, which also contravenes Ghanaian laws,” Mr Agbogah pointed out.

The report showed that combining saiko landings with official landings reported by the industrial trawler fleet of 67,205 MT, it was estimated that trawlers caught approximately 167,000 MT of fish in 2017.

This suggests that just 40 per cent of catches were landed legally and reported to the Fisheries Commission in 2017, despite observers being present on a number of vessels.

Mr Balertey Gormey, a Senior Programme Officer at Hen Mpoano, contributing to the discussion on the way forward towards ending the menace, said persons authorised to check such illegal fishing practices were not being truthful and often controlled by “big hands” in positions of authority.

Madam Edna Quansah, a Programme Officer of the Environmental Justice Foundation, in her welcome remarks, said the country’s fisheries laws were very clear on trans-shipment of fish on the high seas as spelt out in the Fisheries Act, Act 625 of 2002.

She said fish trans-shipment was collapsing the fisheries sector including the traditions and cultures associated with fishing, increased poverty in coastal communities and created inequality among artisanal fishers.

She said the nation was losing between 30 and 50 million Ghana cedis annually through illegal fishing, and if stringent measures were not taken, it would bring socio-economic and ecological catastrophe.

Madam Quansah underlined the need for a serious dialogue on the matter by all stakeholders as soon as possible.

The launch attracted key stakeholders in the fisheries sector including Fisheries Commission, Fisheries Law Enforcement Unit of the Ghana Navy, civil society organisations, representatives from the Ministry of Food and Agriculture, Norwegian Embassy, the academia, students and the media.