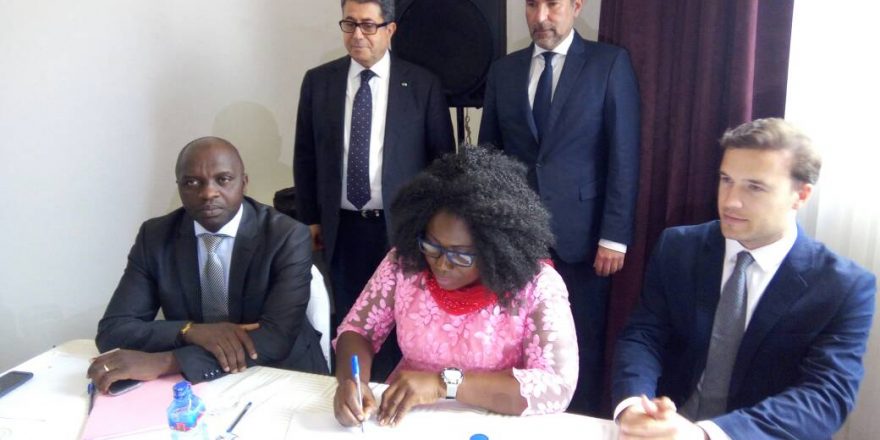 The Minister for Fisheries and Aquaculture Development Hon. Elizabeth Naa Afoley Quaye, have signed a Memorandum of Understanding (MoU) of the Eastern Atlantic Purse Seine Tuna, to protect the Atlantic Tuna and stop illegal, unreported and unregulated (IUU) fishing.

The MoU is targeted at engaging artisanal or small scale fishers in sustainable fishing practices as a means of securing their livelihoods and promoting good business.
The MoU was signed between the Thai Union, World Wildlife Foundation (WWF-UK), Ministry of Fisheries and Aquaculture Development, Republic of Ivory Coast, Boat owners from both the European and Non-European States, processors from both Ivory Coast and Ghana, and fish brokers in Accra today.
Speaking at the signing ceremony, the Fisheries Minister, who signed on behalf of the Government of Ghana, said the the IUU is a canker, and several tools have been developed by the international community to address the problem.
According to her, among tools used were publications of the list of IUU vessels, international legal instruments like port state control measures agreement and catch certification scheme, adding that of all the tools, the most potent and cost effective tool acknowledged by the international community to addressing the problem are the market related measures.
“Access to new markets will enable our canneries to export more of their produce,” Mrs Quaye added. She, however, noted that the expansion of these facilities would create more jobs for our youth and the existing markets would be secured and possible price premiums can be obtained for our fishery produce.
Mrs Quaye further emphasized on the harmonization of the different schemes around the world to create incentives towards compliance and promote international trade in fish products which will reduce the possibility of fraud.
In his remarks, Sylvain Cuperlier, signing on behalf of the Thai Union, noted that the increasing number of stakeholders, including wholesalers and distributors has made it difficult to maintain commitment and transparency.
He, therefore, urged all stakeholders to develop their capacity to develop the fishing industry.
Mr Andrew Russell, who also signed on behalf of the World Wildlife Foundation, expressed concern on how to keep the ocean healthy in order to sustain the exploitation of the tuna resource.
He, therefore, called on all parties to continue in promoting sustainable fishing practices.
Mr John Farmer, Ghana Tuna Association, gave the assurance that tuna fishing would be conducted in a more sanitized manner for the consumption of the public under the Fish Improvement Project.