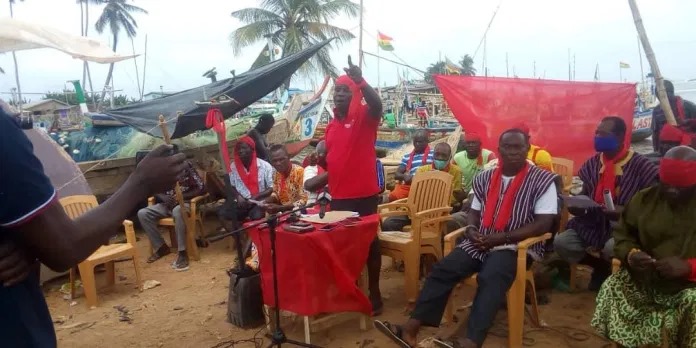 The Ghana National Canoe Fishermen Council has called on President Nana Addo Dankwa Akufo-Addo to direct all industrial pair trawlers to land their catches at the two designated ports of Tema and Takoradi as was done in 2018.

The move, the Council noted, would help the Ministry of Fisheries and Acqua Culture Development and the Fisheries Commission officers to assess the landings of the trawlers and to identify vessels with juveniles or small pelagics.

The Council said the presence of observers on the vessels, the CCTV cameras onboard and the Vessel Monitoring Systems (VMS) of the Monitoring and Control Surveillance Device(MCSD) would ensure that the trawlers did not dump their catch on the high seas.

This was contained in a press release issued by Western Regional Chairman of the GNCFC, Nana Emmanuel Odwire and Regional Secretary, Mr Mike Abakah-Edu after a meeting at Axim.

The statement said if such measures were taken by the President “it will compel the trawlers to catch what they have been licensed to catch” and put to rest the illegal transhipment at sea otherwise known as “Saiko”.

The Council noted that Saiko was one of the most damaging forms of illegal fishing, which deprived thousands of fishers and the dependents of their livelihoods and thereby threatening Ghana’s food security.

The Council, therefore, extended its appreciation to President Nana Akufo-Addo for his confirmation during his recent tour to the Central Region that “Saiko is illegal and his government is committed to ending it to save the livelihoods of the over 2.7 million Ghanaians who depend on fishing”.

The GNCFC also commended President Nana Akufo-Addo on the key steps his government had taken to strengthen the enforcement units to improve their efficiency in enforcing the laws.

“The Council is ready to provide further eyes on the sea as we undertake our fishing expeditions and will report suspected cases of illegal transhipment to the marine police to maximize the use of their limited resources.”

The statement said the appeal to the President to end Saiko was informed by the poor catch of fishermen across all the four coastal regions.

The Council called for the enforcement of the existing laws as Saiko is prohibited under the Fisheries laws of Ghana, the 2002 Fisheries Act 625 and the 2010 Fisheries Regulations LI 1968 which specifically prohibits the transhipment of fish from a Ghanaian industrial vessel to a canoe.

It said the implementation of the 2020 budget statement on Saiko is “more than adequate to address the mother of all illegalities.”

The Council called on political parties to formulate policies that would address the issues of illegal fishing in the Fisheries sector.