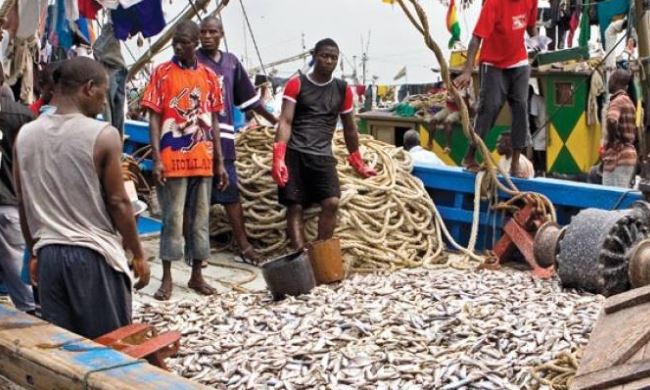 A social intervention project to promote sustainable economic growth and to develop fish farming in the Adentan Municipality was on Thursday launched in Accra.
Dubbed: “Fish for Development Project” (FIDEP), it aims to employ 1,200 youth, 600 women, 60 persons living with disabilities and 360 men along the fish value chain within the Municipality.
The 1.14 million Euro project is being implemented by the Adentan Municipal Assembly, the Centre for Local Governance Advocacy (CLGA) and the Local Governance Network (LoGNet).
The European Union (EU) is funding 70 per cent of the total cost of the project, while the implementers provide the remaining 30 per cent.
It would involve the construction of a demonstration centre at the Amrahia Dairy Farms, fish cages, fish hatchery, and a cottage-based processing centre to facilitate the building of capacity for prospective beneficiaries.
Launching the project, Mr Osei Bonsu Amoah the Deputy Minister for Local Government commended the EU and the implementers for the support towards ensuring that more jobs were created in the Municipality.
He said the project would assist in quickening the poverty reduction agenda of the government and ensure equitable distribution of wealth among the youth, women, PWDs and men living in the Municipality.
Mr Amoah urged the Assembly Members in the various electoral areas of the Municipality to support the initiative for its successful implementation.
Mr Daniel Alexander Nii-Noi Adumuah, the Municipal Chief Executive (MCE) of the Adentan Municipal Assembly, said fish farming had been identified as one of the economically viable activities within the Municipality with high stakeholder interest.
He said despite the interest, only few individuals and groups had ventured into it through backyard fish farming.
However, they are also faced with technical capacity challenges and the high cost of quality fish feed.
Mr Nii-Noi Adumuah said it was the hope of the Assembly that FIDEP would, within the 40-month duration of the project, improve the existing situation by providing farmers, fish processors and interested persons, the needed support to produce on a sustainable basis.
He said the project would contribute to promoting Government’s efforts toward food self-sufficiency, especially in fish produce and address the challenges of youth unemployment.
The MCE said the project would not only boost the local economy but would help protect and preserve the 22 water bodies dotted in different parts of the Municipality, out of which five were facing serious encroachment.
He commended the EU for funding major portions of the FIDEP project after it had also supported a Mushroom project in the Municipality to empower the youth to venture into mushroom farming.
Madam Diana Acconcia, the EU Ambassador to Ghana, said the project was selected during the call for proposal on the basis of its viability, sustainability and the tendency to support local development.
She said the funds for the project would be a seed money to create demonstrations sites to train more individuals.
She said one notion of the project was to equip those who were already engaged in fish farming on a small basis with the skills and tools to scale up their ventures for profit and to enhance the local economy.
To ensure the smooth running of the project, the Deputy Minister swore in nine members each for the Project Management Team and the District Steering Committee.