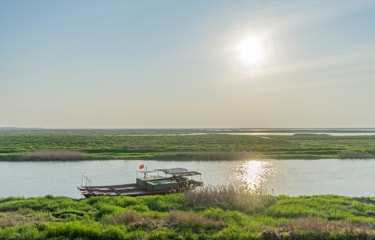 A leading Chinese international fishing company has been featured in a professionally-shot video aimed at promoting African fisheries in the Chinese media.

Fujian, China-based Poly Hong Dong Fishery Co. (also known as Fuzhou Hong Dong Yuan Yang Fishing Co.), which operates a USD 200 million (EUR 171.5 million) fishing base in Nouadhibou, Mauritania, on Africa’s northwest coast, is the feature subject of the video, posted recently on the popular Tang Yuan app. Workers at Poly Hong Dong’s plant are filmed sorting and freezing various fish and cephalopods while a Chinese manager at the cold-chain warehouse explains how his operation handles 10,000 tons of product annually that is sent to China, Europe, and Japan. However, none of the value-added processing that takes place at the facility is captured in the film, nor is there any footage from the company’s fishmeal plant in the Mauritanian capital.

Also interviewed in the film is the Chinese ambassador to Mauritania, Zhang Jian Guo, who tells the camera how African countries need economic development and that China is adding value to the Mauritanian fish catch and paying taxes. Then Mauritanian Minister for Fisheries and the Marine Economy Nani Ould Chrougha makes a cameo, explaining how his country relies on private, foreign companies to take the fish out of the sea. Chinese companies are welcome to invest, explained the minister.
“Otherwise, we don’t have the resource,” Chrougha said. “It remains in the sea.”

The minister’s office declined to talk to SeafoodSource about the video or the country’s position on the role Chinese fishing companies play in the local economy.

But not appearing in the film is any interview with local fishermen or with environmentalists who have complained about issues around overfishing depleting local stocks – in fact, local fishing resources are described as “bountiful” in the film.

Also not mentioned is a parliamentary investigation of deals signed between Poly Hong Dong and then-President Mohammed Ould Abdel Aziz, granting the company 25-year access to Mauritanian waters in 2010.

The video appears specifically aimed at encouraging Chinese investment in African fisheries. One Chinese state broadcaster that has aired the film in China has previously championed the idea of international expansion of Chinese commercial fishing ventures. And there are likely more companies interested in copying Poly Hong Dong’s success abroad, with the help of the Chinese government, which has encouraged distant-water fishing efforts.

The government’s efforts to combat illegal fishing inside of its own borders have been particularly visible this year with the enforcement of a 10-year ban on fishing in China’s longest river, the Yangtze. And the effort extends to local governments as well – the city of Jiangnan, for instance, has this year banned any use of terms like ‘Yangtze wild fish’ on e-commerce platforms.

Separately, the provincial bureau of the Administration for Market Regulation has been deployed by Jiangxi authorities to enforce a ban on sales of Yangtze fish and any use of terms such as “wild Yangtze fish.” The bureau has launched a dragnet operation that has seen inspectors visit markets, restaurants, and warehouses. In recent months, local media across all provinces irrigated by the Yangtze have featured an endless parade of culprits either in court or in handcuffs at a riverside. Boats have been seized and jail sentences handed down.

The scale of the effort perhaps demonstrates what China could achieve in enforcing a ban on IUU seafood brought into the country, according to Wang Songlin, who heads the nonprofit Qingdao Marine Conservation Society and fisheries conservation consultancy Tao Ran. A marine biologist by training, Wang equates the local efforts to clamp down on domestic overfishing to its construction of coal-fired power stations abroad while championing renewable energy at home.

“I do not think the 10-year closure for mainstream Yangtze River (and major lakes connecting with the Yangtze) is going to be a model for China’s distant-water fisheries management,” Wang said. “The Yangtze River is an extreme case where most commercially-important fish stocks have already collapsed.”

But other lessons learned in China’s fight against overfishing at home could be implemented to cushion the impact of China’s fishing effort abroad, Wang told SeafoodSource.

“The distant-water fishing industry is still considered as a priority sector. I can imagine that monitor, control, and surveillance for the distant water fishing sector will be continuously strengthened with potential application of electronic monitoring, reporting, and traceability systems,” Wang said.

He then adding a warning.

“This will still be a long and hard path forward,” Wang said.