Africa: Global use of mosquito nets for fishing ‘endangering humans and wildlife’ 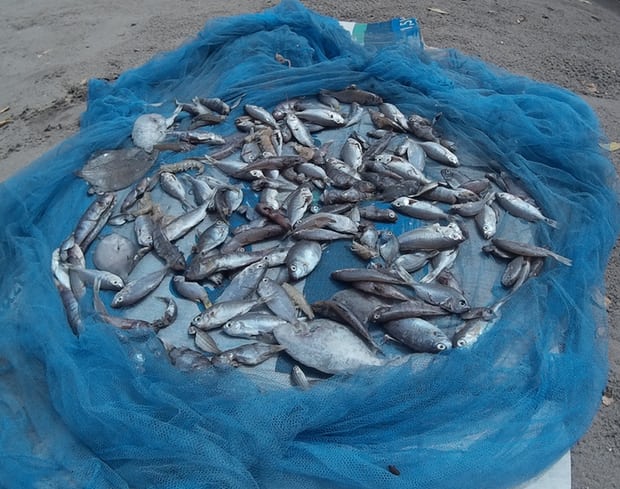 Mosquito nets distributed to combat malaria in developing tropical countries are also being routinely used for fishing, according to the first-ever attempt to gauge the international scale of a practice that is of increasing concern to the global conservation and healthcare communities alike. Photograph: Rebecca Short/ZSL

Study warns that use of anti-malarial nets may reduce people’s protection and affect fish stocks, and calls for urgent research into potential impacts.

Anti-malarial mosquito nets are being used to catch fish around the world, according to the first global survey, risking harm to people and fish stocks.
More research is urgently needed to assess these impacts, say the scientists, but they also caution that the draconian bans on mosquito net fishing seen in some countries may cause more harm than good, particularly where people rely on the fish caught to survive.
More than 3 billion people around the world are at risk of malaria. Bed nets to repel the mosquitoes that transmit the deadly disease have played a huge role in cutting the toll it takes. The number of at-risk people able to sleep under nets rose from 2% to 49% in the decade to 2013, with malaria incidence falling by almost 40% over a similar period.
Mosquito nets are often distributed for free and anecdotal evidence of their use for other purposes has been controversial. Examples of nets being used to protect crops, to make chicken coops and even as wedding veils have led to concern among medical professionals that public confidence in a life-saving programme could be undermined.
The new research, published in the journal PLOS ONE, used questionnaires sent to more than 100 health, conservation and fisheries workers around the world to produce a rapid assessment of the prevalence of mosquito net fishing.
The researchers found mosquito net fishing is seen across the globe. East Africa had the greatest concentration, but the practice was also seen from Bangladesh to the Philippines and Papua New Guinea. It was reported in both freshwater, as seen in Africa’s great lakes and in Nepal, and in the sea, in west Africa.

“Whilst we are wholly supportive of the efforts of the healthcare community to tackle [malaria], which is so damaging to people’s lives, we would strongly advocate further research into the potential impacts of this unintended consequence,” said Rebecca Short of the Zoological Society of London (ZSL), who led the new research.
“If those nets aren’t being used for the purpose they are distributed for, then they are not reducing malaria.” said Nick Hill, also at ZSL. The fine mesh size of the nets could also mean young fish are being caught, which could damage stocks.

But Hill also warned that crackdowns, as seen in Mozambique where mosquito net fishing can now be punished with three years in prison, may not be the best response.

In a region in Mozambique where he works, Hill said women whose mosquito fishing nets were confiscated and burned then left their children at the police station, demanding that officers feed them instead. “If you put a young mum in prison for three years who is trying to look after young children, it could potentially have a hugely negative effect,” he said, adding that the root cause of lack of food needed to be addressed in such situations.

The impact on malaria infections of mosquito net fishing is not known, although one small study in Kenya showed the nets were so plentiful that people could both fish and hang nets over their beds. But Hill warned that those nets might have been diverted from elsewhere.

A World Health Organization spokesman said: “Misuse of nets is certainly a concern if and when it happens, but needs to be put into the context of the enormous benefit that their use of long lasting insecticide treated nets has had in terms of reducing the burden of malaria.”