Africa: Trade subsidies and the development of fisheries value chains in West Africa 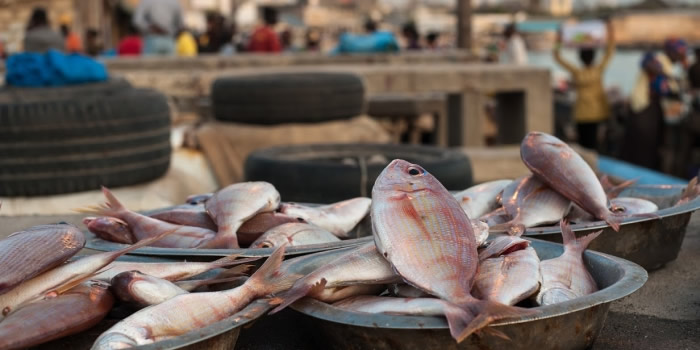 Developing a blue economy in West Africa will require fostering fisheries value chains. How can support policies be revised for the region to better harness the opportunities offered by the fisheries sector?
In Africa, approximately 10 million people work in the fishing industry, including 7 million in West Africa and Central Africa. In West Africa, exports and direct access to fishery resources are the two main procurement processes for international markets, especially through fishing agreements such as fisheries partnership agreements (FPAs) with the EU. To these two legal processes, one must add illegal, unreported, and unregulated fishing (IUU) – also known as pirate fishing – which is prevalent in the waters of West African countries and is difficult to quantify.

According to INTERPOL, IUU fishing is responsible for an estimated financial loss of US$1.3 billion per year in West Africa. Fishing brings with it many advantages: it fuels economic growth, provides livelihoods to a large part of the population and is, for most people, the main source of dietary protein as it is easily accessible. Fisheries value chains (fishing and aquaculture) are undoubtedly one of the key components of the future development of West African countries. However, this industry has been threatened by the overuse of fishery resources for years, which has impacted not only fish stocks but also the blue economy.[1]

To help develop fisheries value chains, coastal African states have instituted support schemes to modernise small-scale fishing techniques, facilitate supply to national markets and increase export revenue. Nevertheless, these efforts should take place within a framework where ensuring the sustainability of fishing practices is a priority. This has led in particular to the current discussions at the WTO on increased regulations for trade subsidies in this field, along with the development of other instruments such as eco-labelling and the FAO’s Port State Measure Agreement.[2] Consideration should therefore be given to how trade subsidies and support policies to ensure the sustainable management of halieutic resources while also encouraging the development of fisheries value chains and strengthening the competitiveness of African fishery products on the global market.

Likewise, as evidenced further on, the development of these value chains relies on inter and intraregional African trade which, far from being a way of turning inward, helps increase the value added derived from the sector by small-scale fishing communities that play an active role in production and processing, while contributing to food security.

Following their independence, most West African coastal countries financed and subsidised their fishing industries in order to modernise their fleets and develop a substantial national capability that would allow them to harness their fishery resources. This state support helped modernise small-scale fishing and provide equipment (nets, lifejackets, Sat-Nav, etc.) to fishermen. At the same time, states instituted support schemes to build national industrial fleets in order to strengthen their export capabilities for fishery products, which are a source of foreign currency and export revenue. The modernisation and development support schemes for the fishing industry still exist today, despite the overuse of fish stocks and fishing overcapacity for most of the exported resources, and in particular for coastal demersal species.
Senegal, one of the main West African fishing powers, is a textbook case for the use of support schemes and trade subsidies to develop fisheries value chains. As this country is a member of the WTO and of ECOWAS, its trade policies are in line with the schemes of both these organisations. The strategy of the Senegalese trade ministry involves accelerating integration in international trade, developing competition, and improving distribution networks, as well as fostering the integration of the informal sector in today’s modern economy.
A study of Senegalese trade policies for the fishing industry can therefore highlight several export support measures. Since the mid-1970s, there have been trade development strategies based on using the status of free export company as well as granting direct or indirect subsidies. In addition to these strategies to strengthen the export position for fishery products, the devaluation of the CFA franc in 2014 and the signing of fishing agreements – including with the EU – played a significant role in helping the fishing industry look outwards. Finally, the Senegalese state also implemented certain measures in order to facilitate supply of the national market.
The statuses of special free zones and of free export companies

These statuses are used to give fishing companies significant fiscal, customs, and financial benefits. Examples of such benefits include:
–      prohibition of measures of a discriminatory nature compared to unlicensed companies;
–      lower corporation tax (15 percent instead of 15 percent);
–      elimination of tariffs, taxes, and customs duties for imports and exports of capital goods, raw materials, and semi-finished or finished goods;
–      exemption from taxes on investment income made by the company from dividends distributed;
–      exemption from employers’ nominal charges;
–      exemption from registration fees and duties on forming and amending articles of association.

On 13 April 1991, Act 91-30 defining the status of special free zone extended these benefits to export companies outside of the industrial free zone. In 1995, these advantages were granted to all national agricultural businesses (including the fishing industry), provided that the company exports 80 percent of its production. They helped increase the competitiveness of the country’s exports, in particular for fishery products, and were supplemented by subsidies.
Export subsidies

With Act 80-36, passed on 15 August 1980, export companies were able to benefit from subsidies of 10 percent of the FOB (free on board) value of their goods. This amount was raised to 15 percent in 1983. Originally restricted to farm goods, the subsidies were then broadened to include fishery products, starting with tuna. In 1986, a criterion regarding the national industrial value addition incorporated in finished products was introduced by another law that defined the base of the premium more clearly. This new law raised the rate to 25 percent.
The devaluation of the CFA franc
In 1994, the devaluation of the CFA franc had a positive impact on the competitiveness of national products (including fishery products). Following an average decrease of 12.4 percent per year recorded between 1990 and 1993, the total volume of seafood exports saw an average increase of 5.8 percent per year between 1994 and 1999.
Support measures for small-scale fishing

In addition to support measures implemented by the state to strengthen the export position for fishery products, exemptions and tax refunds were also granted to small-scale fishing business units in order to strengthen supply of the local market. This included tax refunds for boat fuel as well as tax exemptions for the purchase of overboard engines. The Senegalese state has recently introduced a five billion CFA franc subsidy to buy overboard engines for small-scale fishing.[3] In general, direct and indirect subsidies (in the shape of tax exemptions) granted to small-scale fishing average nearly thirty million euros per year.
Adverse effects

The support provided to small-scale fishing aims at facilitating the supply of fishery products to the national market. Paradoxically, the small-scale fishing units that benefit from it rather tend to supply exporting industrial units, to up to 80 percent of their input needs. This situation therefore has a negative effect on the supply of national markets for fishery products value chains, as products become rarer and local prices surge.
Furthermore, without efficient control mechanisms, state support also encourages overfishing. Not only do national fishermen divert state subsidies from their initial objective, they also often carry out a form of “environmental dumping” to compensate for the attrition of their profit-and-loss accounts and increase their profits.[4] Fishery resources suffer from this, as it leads to risks of overfishing and biological disruption – or even extinction – if fishing capabilities increase and no measures are taken to ensure their sustainability.
Finally, not only do the trade subsidies granted by the state to reinforce the export position for fishery products encourage exports without further processing and without any form of enhancement as well as the overuse of fishery resources, they also increase the dependence of West African countries on the European market. This dependence was reinforced by the trade preferences granted to countries in this region through the Cotonou Agreement – and, before that, the Lomé Conventions – between African, Caribbean and Pacific States (ACP countries) and the EU. These trade preferences, which were significantly weakened by the decrease of tariffs for other countries that also export fishery products to the European market (Thailand, China, etc.), will likely be abolished when the Economic Partnership Agreement (EPA) between the EU and the West African region enters into force shortly.
Developing value chains by redirecting subsidies

Fishing subsidy regulations under the auspices of the WTO are therefore a windfall for West African countries with a view to creating a true blue economy from the development of fisheries value chains. Indeed, this could allow states to completely rethink support schemes for fishery industries by adopting a sustainability perspective and focusing on added value for the African market. At the same time, they might question the transfer of developed countries’ fishing overcapacity to West African waters through fisheries agreements. Developing fisheries value chains in West Africa involves redirecting trade subsidies from the “capture segment” to the “post-capture segment”, which includes improving the quality of products, their processing and access to local, regional, and African markets, since they hold enormous potential that remains largely untapped.
Redirecting these subsidies would help increase competitiveness on the African market while also having a positive impact on food security and the fight against poverty. It could also encourage the empowerment of women, as they often play a dominant role in the processing of seafood products. Fisheries value chains should therefore be supported by states through support policies and subsidies that help address the significant constraints that they face. Whether in terms of the added value created, job creation, contribution to the diet of the people, or weight in exports, the processing of fishery products is a key pillar of fisheries value chains, which is why it is important to support it as much as possible.
The marketing of processed products, which continues to be mainly carried out through informal channels, also needs to be developed. Despite the dynamism and flexibility of these channels when it comes to meeting regional demand, the sector is faced with huge challenges (limited transport facilities, border issues, duties, lack of information, etc.).
Experts generally agree that the key to developing fisheries value chains has nothing to do with increasing catch levels, but rather lies in enhancing the value of local products through small-scale processing and more effective marketing. Subsidies must be redirected to these business segments in order to face the challenges posed by respecting health and quality standards, providing adequate infrastructure and production, storage, and transport equipment, fostering capacity building for women involved in processing activities in intra and interregional trade, as well as combating police and customs harassment and all forms of violence against women.

[1] The blue economy is wide-ranging and covers more industries than just fishing and aquaculture. It also includes tourism, transport, naval construction, energy, bioprospecting and all aspects of the underwater mining industry.

[2] The FAO’s Agreement, which came into effect in June 2016, helps fight IUU fishing by allowing port authorities to prohibit the entry and trade of fishery products of dubious origin that cannot be traced.

[3] This corresponds to over 7 million euros worth of subsidies intended for purchasing engines for small-scale fishing.

[4] Fishing more to earn more in order to compensate for the potential loss of competitiveness in markets, against the background of free access to resources and/or absence of restrictive controls on landings (authorised sizes and weights) and the fishing gear used.