The 6th International Forum on Illegal, Unreported and Unregulated (IUU) 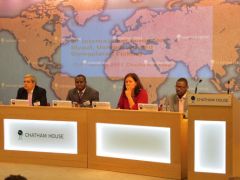 On 13 to 14 January 2011, the 6th International Forum on Illegal, Unreported and Unregulated (IUU) Fishing was held at The Royal Institute of International Affairs at Chatham House, in London. One of SIF’s/PAF’s roles was to assist in planning and preparing the Africa session, together with its partners.

A variety of topics were discussed, including:

The Africa session contained the presentation of a short documentary ‘Illegal fishing in African waters’ prepared by the Environmental Justice Foundation, and the perspectives of one country’s (Mozambique) and two RFBs’ (Fisheries Commission for the West Central Gulf of Guinea [FCWC], an advisory body, and the Indian Ocean Tuna Commission [IOTC], a management organisation) activities towards combating IUU fishing. The session highlighted the challenges faced by African countries, but also the willingness to act towards change. Mozambique gave a presentation on the Antillas Reefer case – a vessel caught fishing illegally in Mozambican waters in 2008, and the processes related to bringing the case to a successful prosecution. The Secretary General of FCWC provided an overview of the challenges of implementing the FAO Port State Measures Agreement in Africa, but also stressed the opportunities involved. Finally, the Executive Secretary of IOTC explained the steps taken by IOTC to reduce the risk of illegal harvesting of tuna, noting for example its record of active vessels (useful in managing capacity and unique among tuna RFMOs) and its record of authorised vessels (a positive list).

Some of the opportunities for SIF/PAF in assisting in the facilitation of this meeting consisted of: