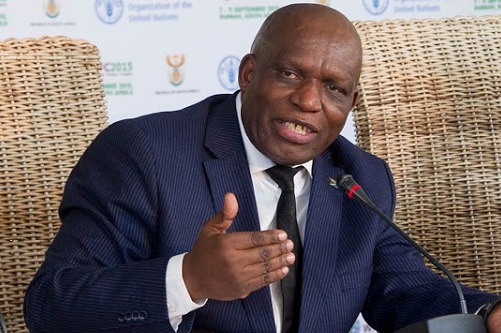 The President has directed us to ensure that as government we urgently initiate farmer support programmes in depressed areas before the first rains of this year.

The Marine sector continues to be a contested sector and as a result many key players are putting immense pressure from government to act in ways that favours their interests. It is a concern to government that various issues that have been occupying much of the media space have not been about the advancement of transformation for the fisheries sector. To the contrary, these issues are about a contested space between maintaining the status quo in terms of ownership and control of the industry against the need for transformation. The ocean economy, and more specifically, the fishing sector is one of the lucrative sectors yet underreported in terms of its opportunities for our economy at large. Since my appointment in the Department I made a firm commitment to drive transformation and diversify this niche sector which is dominated by established white and foreign companies harvesting our marine living resources. I have always been concerned by the lack of entry by those who were previously disadvantaged to the industry. The amendment of the Marine Living Resources Act has located firmly on the agenda the issue of transformation of the industry.

We want to see more Africans in general and blacks in particular participating as Small Scale Fisheries (SSF) at all levels as primary fishers, processors and marketers. We want to see our emerging fisheries owning fishing vessels and therefore expand their capacity as major players in the industry. It is pleasing that already we have some Small Scale Fisheries who are organized and already understand the sector. We also acknowledge that our pace of transformation for SSF to upscale faster than they are, through transformation in line with Marine Living Resources Act, has been slow. Allocation of fishing rights to the previously disadvantaged sections of our society is my priority. A lot of work is being done in this regard to open more access through quotas so that fields are levels for entrance. Ocean economy carries with it massive opportunities for this country, it has a potential to unlock great numbers of employment opportunities whilst facilitating many downstream and upstream business opportunities including in its value chain.

It is in this regard that as a Department we have been dragged to Court by World Wild Fund (WWF) for us to reduce significantly the Total Allowable Catch (TAC) in West Coast Rock lobster Crayfish. As South African government, appreciating the social dynamics such as the need to create more access for the Small Scale Fisheries and coastal communities to the fishing sector, we choose an approach that is balanced – that is scientific considerations coupled with the appreciation of our inescapable mandate to increase access to the marine living resources, especially those who were excluded in the past. Multiplying Small Scale Fisheries and access to the nearshore harvest of poor coastal communities for purposes of food security is what I want to achieve in all our four coastal provinces.

We hold the view that biological and scientific considerations are important and need to be considered in the broader spectrum of socio economic balance, in particular for a developing country like ours whereby social and economic cleavages are so acute. In areas where there are no issues of social redress to level the access fields in our marine living resources extraction, which is the biggest economic endowment the country has, we will definitely act in ways that are non-interventionist. In this regard we are concerned about some Small Scale Fisheries who have joined the Court case as friends of the Court from the side of the WWF than government. I have directed that we meet them for engagement so that they understand that government is acting in their interests.

The primary aim of the Small Scale Fisheries Policy (SSFP) is to provide redress and recognition of the customary rights of traditional fishers and to promote the socio-economic development of these fishers and the communities in which they reside. The Department has started the Small Scale Fisheries Policy implementation process with the amendment and promulgation of the Marine Living Resources Act and approval of the Small-Scale Fishing Regulations in March 2016. The Department also conducted an extensive registration and verification process for small-scale fishers in 2016 covering 316 communities and registering over 22 000 applicants. Applicants were verified against a set of five criteria and provisional list of successful fishers were announced in communities in 2016-2017. This provided unsuccessful applicants an opportunity to appeal. The appeals process has closed and the Department has assessed all the appeals and made recommendations to the Minister on the final list of successful small-scale fishers.

As a Minister, I have approved the final list of small-scale fishers for Northern Cape (October 2017), Eastern Cape (December 2017) and KwaZulu-Natal (December 2017). The final lists were subsequently announced in the respective provinces. It is only the Western Cape communities that are outstanding due to the added complexity of the Department having to follow-up on tip-off information that it received from communities before final list of fishers can be announced. With regard to the Western Cape, I have recently appointed the Appeals Advisory Team on the Fisheries Rights Allocation Process (FRAP2015/16) and the Appeals Advisory Team will advise me for all the West Coast Rock Lobster fishery appeals, the work that will be finalized no later than the 31st of August 2018.

We are moving with great speed in maximizing entrances of the previously disadvantaged people and communities to the fishing business as part of deepening diversity and economic transformation.

As we continue with these strides, there are companies that are working against the good cause of government by all means. It has been brought to my attention that hundreds of individual fishing rights holders based on the Western Cape coastal fishing communities have been unlawfully displaced of their rights through a transaction involving two well-known commercial entities.

The complaints made are of a serious nature and in response to the Office of the Public Protector I have dispatched a legal team to meet the affected fishing communities. I have further mandated the team to contact all implicated commercial entities.

As a Minister, I am concerned about the scale with which abalone poaching in this country is rising with sophisticated foreign syndicates at play. I have been disturbed that’ despite our marine Fisheries Control Guards efforts which has ensured that we confiscate the stolen abalones, that these syndicates have succeeded to infiltrate some of our officials who are colluding to smuggle abalone out of our stores where we keep it. Recently our own Officials have been arrested for these acts of stealing abalone working with these syndicates. Poaching is part of Illegal Unreported and Unregulated (IUU) fishing which is a Global Challenge. We are dealing with syndicates with deep pockets who bribe their way through.

Globally, fisheries resources available to bona fide fishers are poached in a ruthless manner by IUU fishing, often leading to the collapse of local fisheries, with small-scale fisheries in developing countries proving particularly vulnerable. South Africa is not exempted from this global challenge. However we are delighted that, action is being taken all over the globe to combat IUU fishing and DAFF, in collaboration with other law enforcement agencies, has had its hands full in terms of taking law enforcement action (arrest & issuing fines) against IUU fishing suspects in all four coastal provinces.

In one incident recently on the 16th July 2018, 12 suspected poachers were arrested and a Boat confiscated with 1544 Abalone Units in Robben Island area. A Docket had been registered in Table Bay Harbour Police Station.

On another incidents, seven suspected poachers were tracked down and arrested on the 8th of July 2018 in Bloubaai, Gansbaai area for illegal possession of Abalone, a Colt Bakkie and a Boat was confiscated. On the same day, in Port Elizabeth a person was arrested, a Boat and various types of fish were confiscated.
In Lusikisiki and Flagstaff, four were arrested for illegal possession of East Coast Rock Lobster on the 7th and 8th of July 2018. And a lot of others.

As part of mitigation, I am looking at measures such as appointing a service provider that will distribute the confiscated abalone to our fishing communities and cooperatives than keeping them to our government stores.

We are on an initiative to use the services of the Military Veterans in order to reinforce Departmental capacity in fighting poaching of the Marine Living Resources. This is in line with our long held view that the Department alone will not succeed in fighting poaching and therefore a need for all strategic structures of our society to be mobilized towards assisting in curbing the challenge of poaching. We are also engaging the Department of Military Veterans in order to ensure that Military Veterans are not only utilized in the Western Cape but also in Eastern Cape, Kwazulu Natal and Northern Cape.

I have also engaged with the Minister of Environmental Affairs to exchange experiences of how rhino poaching is being dealt with so that we improve even more our efforts to protect this endangered species in our ocean. This fight also includes the poaching of our west coast and east coast rock lobster crayfishes in our ocean. We will also approach the Department of Justice to consider re-opening Environmental Courts where in Fisheries cases can be dealt with specialization and with prioritization they deserve because currently they compete with other cases like Murder, Rape, Assault GBH, which are generally viewed to be more serious than Fisheries cases.

For us in the Department of Agriculture, Forestry and Fisheries, our mandate is going to be impacted upon by the outcomes and processes that will arise from the consequence of land expropriation without compensation. Consistent with the ANC resolution that says : “Ensure land reform enhances food security for poor families and maintain food security for South Africa as a whole”. This means that all agricultural productive land expropriated and redistributed to the rightful owners, our task as the Department would be to roll out solid support programmes, extensive training of beneficiaries and conducting various hand-holding exercises so that we don’t undermine agricultural production as an economic factor and food security for the country. We anticipate more small-holder farmers to emerge out of this path we are embarking and future commercial farmers and including their value chains.

This opportunity of owning land, if correctly handled, will empower our youth to pursue many agricultural enterprises taking advantage of smart technology that is now dominating the sector. We need a new generation of farmers from our youth ready to take up the cudgels from the aging generation of farmers. For adequate support provision, more capacity and resources in our Department is needed. We are setting ourselves up to cope with the potential demand. This capacity building is expected to be replicated in all our provincial Departments.

The President has directed us to ensure that as government we urgently initiate farmer support programmes in depressed areas before the first rains of this year. This should include supporting farmers with tools, tractors, fertilisers, seeds, extension services, finance and access to key infrastructure. I am convening the MinMec (A meeting of all MECs of Agriculture) soon this month to ensure that all provinces meets their Planting Season targets in the context of comprehensive food security support which includes distribution of all necessary implements to our people involved in the farming. We have been discharging these services to our people but more need to be done to cope with a renewed interest in sector.

As a Department we will expand our capacity working with our provincial Departments to deliver on the Freedom Charter’s dictates that “The State shall help the peasants with implements, seeds, tractors and dams to save the soil and assist the tillers”

Distributed by APO Group on behalf of Republic of South Africa: Department of Government Communication and Information.