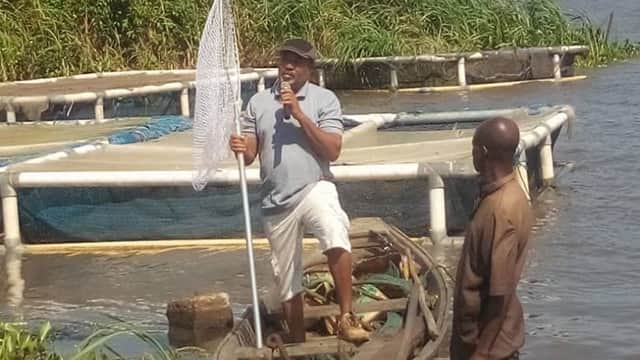 Lagos State Agro-Processing, Productivity, Engagement, and Livelihood Support (APPEALS) project has concluded a three-day capacity training for farmers on Tilapia production, using the Cage Culture Rearing Method; Control of Water Hyacinth and Production of Organic Fertiliser from Water Hyacinth.
The World Bank-assisted project, in collaboration with the Federal Government, in partnership with the Lagos State Government, held at Topo, Badagry, is part of efforts to utilise water bodies to develop aquaculture and also improve residents’ nutrition.
The State Project Coordinator (SPC), Mrs. Oluranti Oviebo said the state has identified three water bodies that are safe for Tilapia Cage Culture, noting that comprehensive analysis had been conducted on the water bodies in Afowo in Badagry; Agbowa in Ikorodu and Ebute-Afuye in Epe.
According to her, the cage culture is for naturally growing fish in open water but confined in a cage; noting that the earthen pond is the aquaculture, where there are pond and water seepage.
“It is not enough to say you are going into Tilapia farming and then you go in search of any water body to start using. We took the samples of the water bodies and the soils so that it doesn’t look like a mere experiment. We have to be sure of the composition of these sites to ascertain their suitability to culture Tilapia,’’ the coordinator said.
Oviebo noted that existing fish farmers must have a minimum of three years of experience in the business, with a very good business plan to access grants.
Permanent Secretary, Lagos State Ministry of Agriculture, Dr. Olayiwole Onasanya said the state is always working out ways of improving farmers’ standard of living through the utilisation of natural endowments.
“We have to improve the nutrition of our people, as well as increase the income of farmers and their standard of living by having more fishes to cultivate to improve their income. With the ecology of Lagos State being a coastal area, endowed with water bodies, we, therefore, need to utilise those water bodies to improve fish production.
A Tilapia Cage Culture Farmer, Mr. Remi Ahmed, who is the President of, Tilapia Aquaculture Developers Association of Nigeria (TADAN), lauded the project for creating an opportunity for farmers to harness technologies in the fisheries sub-sector.
Ahmed said there were certain processes involved in cage culture, that would make tilapia cage culture easy and productive, which farmers hitherto, took for granted.
“This event is to promote the cage culture of Tilapia. There are lots of water bodies that are underutilised. Let me be fair to the northerners who use them for irrigation; but in the West, we do not use them for anything.
“If you have the floater, put your fish and start feeding it. It will reduce mortality because they are in their natural habitation. Even in the North, irrigation should not be the only use of our water bodies because you can still use the water of the cage to do your irrigation,” he said.
In his presentation, on Water Quality Management, Managing Director, Latia Global Investment Ltd, Mr. Nurudeen Tiamiyu, said there were technologies that could ease the business of cage culture.
He noted that farmers should take daily records of the water temperature, turbidity, water depth, movement, bottom type, cage size, shape, and mesh and happa net size, among others.
Speaking on behalf of the participants, a Cage Culture practitioner, Mrs. Abeni Oshinlolu, said the training has enlightened them, to improve on their farms.
She said they have been exposed to new technologies and innovations, which they hitherto had little knowledge of before the training.
The APPEALS, a fallout of the Commercial Agriculture Development Project (CADP) by the World Bank is focused on three crops; Rice, Aquaculture and
Livestock.