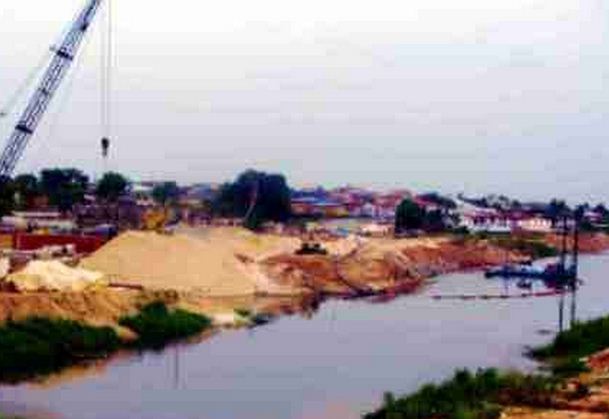 Rivers in the Lagos area of the country are under intense pressure due to various kinds of human activities. The most noticeable one is the indiscriminate extraction of construction grade sand by mining operators.

At the Majidun Beach, in Ikorodu, area of Lagos, local sand miners are always busy dropping sand at the bank of the river on daily basis, just as the licensed dredgers spread all around river banks in Lagos pumping out sand from the rivers and making fortunes from it every minute of the day.

The situation is rather alarming in the Majidun river, Lagos, an area that was hitherto known as a beehive of activities for fishermen in the last two decades. Scores of fishermen who spoke to Saturday Vanguard lamented that the activities of the in discriminatory mining of the operators have drastically dwindled their fish business.

Joseph Aladin who earns his living from fishing business in the area said the situation has forced him to look elsewhere for his means of livelihood. He lamented that the business that was doing very well in the 80s when he started has overtime declined as a result of the activities of the miners.

Asked how the situation affects his business, he said: “As a result of the indiscriminate sand mining, the riverbed is getting lowered for the past two decades, so it becomes difficult to catch fish when the riverbed is deep.”

Idowu Alakija, 33, said sand mining had muddied the river and the situation would worsen during rainy days. He noted that some of his traps he laid to some strategic places had been damaged by activities of the miners.

“Previously, I used to earn about N3000 – N5000 on my catch but these days I hardly get N1000. What we get are small fish which do not attract good prices in the market. I try my hands in some other things now, I don’t depend on fishing again.”

But even as we are faced with the daily dredging, the activity could cause a major change for fish habitation and in turn cause a decline in the fishing business for those who rely on it for living. A local fisherman, Ayinde said, the high cost of fish in the market is relatively a result of the effect of the sand mining. What we use to get about 10-15 years ago when we went on fishing has reduced drastically.

I have been fishing in this area and its environ for the past 30 years, but in recent times, I don’t rely on fishing again, I go on hunting because the waters is getting deeper and deeper every day and it is making fishing difficult.” he said.

The chairman of the Majidun Beach Sand Dealers and the Vice-Chairman, Ikorodu Zone of the Association, Chief Akinade Bello has a different view. He opined that sand mining business in the area is dull compared to other areas and would not affect the business of fishing. He added that mining had been on the decline in the area merely because of what he called the activities of the licenced dredgers.

He however stated that several factors like boat sinking, dearth of divers, the scourge of water hyacinth, government multiple taxation and low demand in sand by customers have been militating against constant mining of sands in the area.

“We have not been doing much for some time, how could any one say our irregular activities affect them.” He added that some of the divers who mine sand from the riverbed are fishermen. “The only thing is that they probably prefer the business to fishing. Both business are seasonal,” he added.

He stated that the licenced dredgers have continued to dominate the market because of the use of machines in pumping out sand from the river.

“The licenced dredgers use equipments and it is easier to mine it from the river because all you have to do is pump it up and separate the water out, sift it and the sand is ready,” Bello said.

On possible dangers of persistent mining of sand from rivers by the plethora of dredgers and miners, the leader of the Majidun beach Sand Miners Association who claimed to have experience spaning 45 years on the business explained that it poses no danger at all. “the river keeps replenishing the supply of sand, bringing more down from upstream.

Whereas if you mine on dry land, you’re creating a hole which is going to remain and has to be used for something else or in some way taken care of.”

A resident in the are who preferred anonymity said government should specify area of mining and prosecute all those who illegally engage in the business.

“If they were allowed to dredge in this area, they would dig a deep hole into the bottom of the river and there wouldn’t be any more shallow, sandy mud flats, they would gradually turn the river into a deeper, channelized river.

Another resident in the area said: “What dredging does to the river is that it makes it unsafe for people to use the river. But I think the dredgers are just trying to earn a living. There is no job out there and there is a demand for sand which is being used for construction.

I suspect until there is no demand for it, they will be on the river making it unsafe for people to use.”

River sand though is vital for human use, the manner of mining has presented a multifaceted problem. Permit for dredging, preserving the environment, meeting the demand of sand for construction, as well as putting food on the table of the local fishermen are some of the nagging questions waiting to be addressed.