Nigeria: A man Survived 3 Days at Bottom of Atlantic Ocean 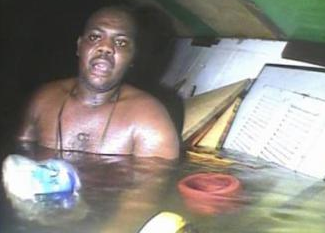 In what has been described as an incredible feat, a team of South African divers, including at least four from Durban, has rescued a man who spent almost three days in an air bubble – 30m under the sea – after the tugboat he was on capsized off the coast of Nigeria.

Ten other crew members died and one went missing. Many of them were locked in their cabins as a precaution against pirates.

But Nigerian Harrison Okene had just got up when the ship rolled. He was able to get himself into an air bubble just 1.5m by 3m, where he perched on a table to keep himself alive, drinking softdrinks out of cans that were floating around him.

According to the owners of the boat, West Africa Ventures, the vessel capsized, but did not sink to the bottom. It floated 30m below the surface, with Okene trapped inside. The vessel had been towing a tanker to a mooring buoy on May 26 when it was flipped by heavy swells.

The South African divers were on a different expedition on the West Coast of Africa when they responded to a May Day call. A 100km away the Chevron-chartered tugboat, AHT Jascon 4, had capsized. It was 27km off Escaros in the oil rich Delta state of Nigeria.

What was meant to be a body recovery mission for the South African divers turned into an underwater rescue when, after 60 hours alone in the wreck, Okene grabbed a diver as he swam past, having earlier failed to attract the attention of the first diver down.

Divers were shocked to have found Okene alive and said they were amazed by how calm he was during the rescue. Because he had been 30m underwater his body had filled with nitrogen and divers had to put him into a decompression helmet before he could be safely brought to the surface.

Okene’s incredible feat and the divers’ effort to bring him to the surface safely has caught the attention of maritime experts and international film-makers who want to turn the rescue into a documentary.

Writing on the Facebook page of a maritime website, Paul McDonald, a “dynamic positioning officer” on board the dive support vessel involved with the recovery and rescue mission, said: “All on board could not believe how cool he was when being rescued. The divers put a diving helmet and harness on to him and he followed the diver to the bell where he was then taken to deck level and kept in the chamber and decompressed for 2 days. It was amazing to be part of this rescue and my sympathy is with the families who lost (their) loved ones.”

Rob Almeida, an accomplished sailor and partner at gCaptain, in an article written for the company’s website, had spoken to former US Navy Salvage Officer Patrick Keenan about the amazing rescue

“The fact this person survived is incredible,” commented Keenan. “After spending two days at 30 meters of depth, he had become saturated, meaning his body had absorbed all the pressurised gases and equalised with the surrounding water pressure. Bringing him to surface from that depth, and after having been saturated at 3 or 4 atmospheres, could easily have killed him.” In saturation diving, divers are brought to the surface from depth using a pressurised diving bell, which mates up to a pressurised chamber on deck. This allows the “saturated” divers to live and work above and below the surface at a steady pressure state for an indefinite period of time, and most importantly, to be brought to the surface safely,” Keenan wrote.

Specialist deep sea diver Patrick Voorma, who owns Calypso Dive Centre at uShaka Marine World, said it was incredible that Harrison was able to survive at those depths for such a long period.

“When you are under water, your internal body pressure will become the same pressure as the water pressure surrounding you. If you go down to 30m there is four bars of pressure – double the pressure in your car tyres – being exerted in your body,” he said.

“By staying under water for such a long time, your body becomes saturated and you will have four bars worth of gas pressure in your body of which the nitrogen will be the problem.”

“It will be like opening up a can of Coke. All that nitrogen will just rush out of your body and will give you a gas embolism which can kill you instantly.”

Corrie van Kessel, spokeswoman for West Africa Ventures, said on Thursday that the divers had yet to find the body of the 12th crew member.

“The search and rescue operation that has been under way since 26 May 2013 has had to be stopped for safety reasons.

The vessel, Jascon 4, which is located some 30 metres under water in an upside down position, has become so unstable that the risk of injury to our rescue divers has become unacceptably high,” Van Kessel said in a statement.

“Our divers performed an extremely difficult and dangerous task in the most testing of conditions and we are grateful for their professional service as well as the contributions of many other personnel who gave all their efforts to this challenging recovery operation.”