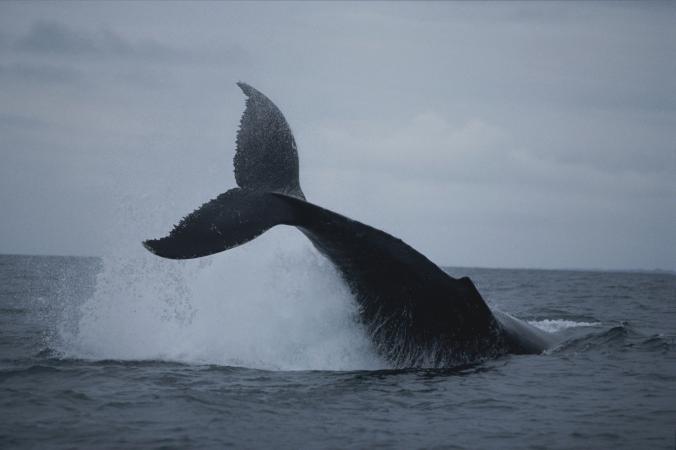 A humpback whale leaps out of the waters near Gabon. Photography by Michael Nichols, National Geographic Creative

The central African nation of Gabon announced Monday the creation of Africa’s largest network of marine protected areas, home to a diverse array of threatened marine life, including the largest breeding populations of leatherback and olive ridley sea turtles and 20 species of dolphins and whales.

The network of 20 marine parks and aquatic reserves will protect 26 percent of Gabon’s territorial seas and extend across 20,500 square miles (53,000 square kilometers). In creating the protected areas, the Gabon government also set up what scientists call the most sustainable fisheries management plan for West Africa—an area long known for rampant overfishing and abuses by foreign fleets. Separate zones have been established for commercial and artisanal fishing fleets, in an effort to restore sustainable fishing.

“West Africa is an area which has incredibly rich oceans, but it is being bled dry by international fishing fleets,” says Callum Roberts, a marine conservation biologist at the University of York in Great Britain. “In the space of a few decades, the waters of West Africa have moved from being a cornucopia of marine life to something that is far reduced from that. Protection is urgently needed to rebalance fish resources.”

Roberts, who has spent more than three decades studying ocean health, argues in a new paper, published Monday in the Proceedings of the National Academy of Sciences, that marine protected areas, which already help restore fish populations, also help marine ecosystems adapt to the impacts of climate change. Large, fully intact ecosystems are healthier and better armed to adapt to what Roberts calls the “killer cocktail” of ocean acidification, intense storms, sea-level rise, shifts in species distribution, and decreased oxygen availability in the deep ocean. Reduced oxygen is already visible in the Pacific and Atlantic, Roberts says, where nutrient-poor “ocean deserts” increased by 15 percent between 1998 and 2006… Continue reading