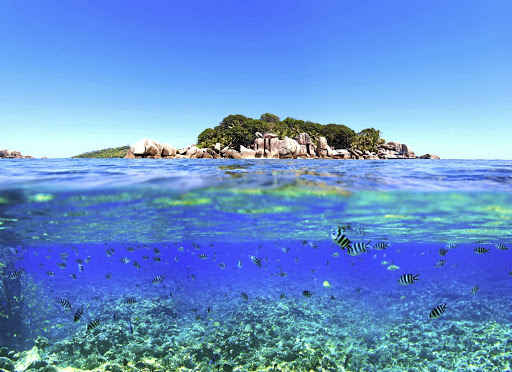 Seychelles is crafting two world-first initiatives to mitigate overfishing and climate change, and to protect its marine stocks and environment.

It has pledged to create two huge new marine parks in return for a large amount of its national debt being written off.
It is also finalising the issuing of the world’s first blue bond, which will mobilise public and private investments for a more profitable and sustainable fisheries sector.
“Seychelles is breaking new ground and has positioned itself as a world leader in ocean governance and management,” said the country’s vice president, Vincent Meriton, when announcing the new initiatives.
The Republic of Seychelles is an archipelago nation of 115 islands. Its marine exclusive economic zone is 1.4-million square kilometres, almost 3,000 times the size of its land area.
More than 300,000 tourists visited Seychelles in 2016, which contributed more than 70% of foreign-exchange earnings. The fisheries sector is the second-largest contributor to the economy, ranging up to 20% of GDP. Nearly all Seychelles’ economic sectors use marine resources — the country has a blue economy.
At a conference titled Financing Sustainable and Climate-Resilient Ocean Economies in Africa held on the island last week, Laura Tuck, vice president for sustainable development at the World Bank, said the global community was beginning to recognise the ailing health of the oceans and find ways to tackle it.
“We now need to give a boost to both the public and private efforts that – if combined — can create healthier, more productive and sustainable oceans,” Tuck said.
“Our vision for this work fits into a framework we call the blue economy. The objective of this framework is to support economic growth, social inclusion and the preservation or improvement of livelihoods while at the same time ensuring — or improving — the environmental sustainability of the oceans and coastal areas.
“We believe that a blue economy approach is the only way to both provide social and economic benefits for current and future generations and protect our oceans.”
The biggest threats to the oceans are overfishing, marine pollution and climate change. About 90% of fish stocks globally are fully fished, overfished, depleted or recovering.
Analysis done for a World Bank report titled Sunken Billions showed that more than $80bn in economic benefits globally are foregone every year due to overfishing.
Plastics are polluting seas at the rate of more than 10-million tonnes a year. China, Indonesia, Vietnam, Philippines and Thailand are responsible for more than 50% of plastics waste in the world’s oceans.
If pollution continues at the current rate there will be more tonnes of plastic than tonnes of fish in the sea in 2050.
“The Bank is working with the government in Indonesia to support a $1.2bn sector development programme in solid waste management over the next six years,” Tuck said.
“Big business and multinational corporations are playing a critical role by making inroads to reduce plastics packaging and the use of microplastics in consumer and industrial products,” she said.
Climate change affects the oceans through sea-level rise, stronger storms, higher ocean temperatures and acidification. In West Africa erosion and flooding from higher sea levels and stronger storm surges are leading to the recession of more than 10m of coastline each year in some areas.
“In response, we are supporting a programme called the West Africa Coastal Areas Management Program, which targets 17 countries with projects that include building sea defences and increasing natural infrastructures such as mangroves,” Tuck said.
“A new investment platform will be launched in May. It aims to crowd in both public and private funds.”
In Sao Tome and Principe, the private sector has been instrumental in finding alternatives to sand mining, banned by the government because of its effect on coastal erosion.
“With support from the Glo-bal Environment Facility Least Developed Countries Fund, the private sector is now crushing basalt rock for construction purposes as an alternative, an approach also practised by Mauritius,” Tuck said.
“The funding available from individual governments and development banks will never be enough to address the magnitude of the challenges our oceans are facing. Complementary — or symbiotic — investments from public and private sectors can yield good returns, create jobs and protect our coasts and oceans.”
Seychelles’ two new Marine Protected Areas covering 16% — or 210,000km² of its ocean — will safeguard the sea and encourage sustainable development adapted to the effects of climate change.
It restricts almost all human activity in one of the world’s most ecologically important habitats, the waters around the Aldabra Group, home to the Indian Ocean’s dugongs, critically endangered turtles, and spawning grounds for rare and economically vital species.
The parks are a result of the first debt swap deal for marine protection in which $22m of the country’s national debt owed to the UK, France, Belgium and Italy was bought at a discount by nongovernmental organisation The Nature Conservancy.
The organisation also raised $5m from donors to pay off part of the debt and cut the interest rate charged to the Seychelles government on the outstanding loan. This frees up $12m over the next 20 years to help implement the new marine plan.
Putting 16% of its territory into Marine Protected Areas by 2018 means Seychelles will have significantly exceeded — three years before expected — the UN Convention of Biological Diversity target for 10% marine protected areas.
The remaining 70% of Seychelles’ ocean are included in the country’s Marine Spatial Plan, aimed at increasing regulatory attention and government oversight of all activities that take place in its marine economic zone.
The Bank approved more than $20m to improve fisheries and marine resources management in Seychelles. The financing, which includes support for the world’s first blue bond, will strengthen value chains and ready the country’s fisheries sector for investment.
The project is the first Bank project in Seychelles in more than 30 years and is part of the third phase of the South West Indian Ocean Fisheries Governance and Shared Growth Program, which aims to increase the environmental, economic and social benefits from sustainable fisheries.