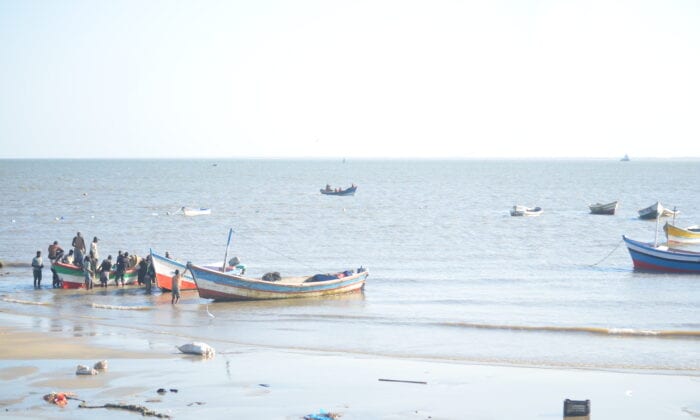 BEIRA, Mozambique—Luis Domingo, a fisherman in Beira, Mozambique, is following the trade that has sustained his family for generations.

But now, he said, “I can go out to the ocean for the whole day and come back ashore with a very small catch or nothing at all.”

“I don’t know what is happening, but we are running out of fish.”

“But we are experiencing frequent droughts in the country and farming is difficult too,” he said. “For many years our lives were centered on fishing but we’re now running out of options.”

Eduardo Chisale, another fisherman in the area, said, “I have heard of so many Chinese fishing vessels here in Mozambique and some of these vessels are fishing illegally. I pray they are not going to leave us with no fish at all. I survive on fishing and nothing else.”

A Wide Net and a False Flag

It’s difficult to say exactly how big the problem of Chinese plunder in Africa is. Studies on the topic have found that Chinese fisheries agreements with African governments lack transparency. Some vessels with licenses flout quotas; many vessels operate without any license at all.

China has the largest distant-water fishing fleet in the world. And an estimated 80 percent of Chinese distant-water catch is from illegal, unreported, and unregulated (IUU) fishing, according to a report commissioned by the European Parliament in 2012.

Some investigations of IUU fishing in Africa have confirmed a heavy Chinese presence. For example, Chinese vessels accounted for more than half the IUU vessels identified off the coast of Guinea in a 2007 investigation by the Environmental Justice Foundation.

IUU fishing is threatening the fishing industry and the health of the oceans globally. According to the Food and Agriculture Organization (FAO) nearly 90 percent of the world’s marine fish stocks are now fully exploited.

In West Africa, about half of all the fishing is IUU. That represents more than $2 billion annually that could be in the hands of local fishermen and communities. It also represents hundreds of thousands of local jobs.

In East African countries, such as Mozambique, the problem is rampant and locals have little left to sustain them.

Backed Into a Corner

Many fishermen are driven “into crime, terrorism, and piracy,” said Yasin Hagi Mohamoud, foreign minister of East Africa’s Republic of Somaliland, in an open appeal he wrote in March.

“Somaliland’s small fishing fleet cannot compete with Chinese vessels and the advanced technology that they employ. It is said that one Chinese ship can catch as many fish in a single week as the average fishing boat in Africa can catch in an entire year. Across Africa, this disparity drains economies of billions of dollars.”

For many years, the Chinese have similarly dominated the natural resource industries on land, particularly logging and mining.

“[Logging] is dominated by Chinese people who go to the bush and convince the poorest people to cut the logs,” Imede Falume, Mozambique’s deputy director of forestry, told Reuters last year.

At the time, Mozambique’s government signed a memorandum of understanding with China to try to stem the major loss of forestland—10 percent of the country’s forests had disappeared since 2000, according to the non-profit Global Forest Watch.

A recent investigation by Zam Magazine in Mozambique found that “the routes used for the plunder of timber before, and now of fish, seem to have been overlapping.” The magazine alleged that “a network of Mozambican ruling party leaders and Chinese businesses” are responsible.

Chisale, the Mozambican fisherman, said he feared reprisal from powerful people linked to the illegal fishing in Mozambique if he spoke with The Epoch Times further about it. But at the same time, he’s optimistic his government will do something about the situation.

“I know our government will do something to protect us because fishing is our future,” Chisale said.

In November, at a meeting in the capital, the Mozambique Ministry of Sea Inland Waters and Fisheries’ national director of operations, Leonilde Chimarize, said the government is working on it.

She said that last year, there were more than 200 prosecutions for illegal fishing and most of the culprits were foreign shipping vessels. He said that the Mozambican government is reviewing legislation, including creating maritime courts to curb illegal fishing in the country.

Ahmed Diame, an oceans campaigner for Greenpeace Africa, has called on African countries to work together on the problem. He said in a 2017 blog post, “I have seen crew applaud their boat’s arrest, knowing the wrongs of their captain’s orders. And I have heard people on land across West Africa speak about their suffering.”

The non-profit Stop Illegal Fishing has helped African countries work together through an effort called FISH-i Africa. It created a network of countries, including Mozambique, that share fisheries intelligence.

For example, if a particular vessel has acted illegally in the waters off the coast of one country, the other countries are alerted and block it from entering their waters.

Peter Sinon, former minister of natural resources for Seychelles, said in a FISH-i Africa press release that before FISH-i, “[we were] shooting in the dark, we were not seeing the whole picture. The illegal fishers would play us one against the other, be clean in one port and illegal in another.”

China has taken some action to address the problem. From 2016 to 2018, it canceled subsidies worth $111.6 million for vessels caught fishing illegally, according to Greenpeace. It has also revoked the distant-water fishing licenses of several companies.

China has had a shaky relationship with international laws, such as the U.N. Convention on the Law of the Sea (UNCLOS), that would protect Africa’s coasts.

“While China has adjusted its legislation in accordance with UNCLOS, enforcement of these laws and regulations remains a great challenge,” said Tabitha Grace Mallory of Johns Hopkins University, in testimony to the US–China Economic and Security Review Commission in 2012. China’s will to implement UNCLOS has been called into question in its dealings with other nations in the South China Sea, closer to home.

With some other international initiatives related to IUU, China has either refused to sign, or signed but not ratified. For example, it did not sign the UN FAO’s 2009 Port State Measures Agreement, which would require port states to inspect fishing vessels and deny entry to those engaged in IUU fishing.

The Environmental Justice Foundation (EJF), a UK-based organization working internationally to address threats to environmental security and their associated human rights abuses, said marine fisheries are critical for the food security, income, and employment of coastal populations across West Africa.

An estimated 6.7 million people depend directly on fisheries for food and livelihoods, with fish accounting for over 50 percent of animal protein intake in countries such as Ghana and Sierra Leone, EJF said in a recent report.

Greenpeace’s Diame spoke to the conditions of the people working on the boats and sanitation issues for food handling, when he described one vessel he observed: “Nets, rubbish and dead fish were strewn over the rusty deck. We found out that the tiny, 21m long boat was home to at least 20 workers, living in incredibly cramped and unhygienic conditions.”