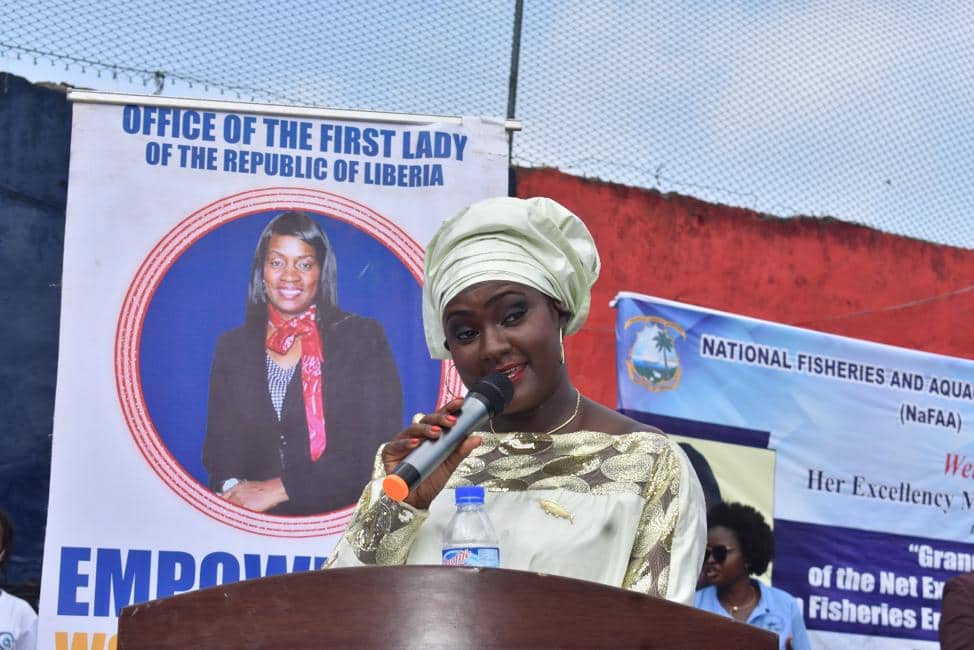 WEST POINT, Monrovia – The Director-General of the National Fisheries and Aquaculture Authority (NaFAA) has stressed that the protection of ‘Liberia marine resources remain a significant pillar in maintaining a sustainable fisheries sector.

Speaking recently at the official launch of NaFAA’s Net Exchange program held in the Township of West Point, Director General Emma Metieh Glassco pointed out that NaFAA has adopted an approach to ensure that fish is available at all times, ‘for our generation today and the ones unborn’. This, Hon Glassco says will provide a cycle of socioeconomic intervention for the people dwelling in fishing communities.

Hon. Glassco noted that “as a Government institution, NaFAA remains committed to ensuring that the people of Liberia benefit from their fisheries resources.  Providing an over view of the Nets Exchange program under the CDC led government, Madam Glassco noted that “today marks a major achievement of a milestone in ensuring that we as government live up to our social contract with the people, by providing interventions and opportunities to improve their lives.

The NaFAA Fisheries Expert disclosed that government’s efforts are to guarantee that everything counts; the availability of fish resources, the fishing methods, the fishing gears, the processing, handing and distribution as well as the quality of fish that end up in the plates.

Madam Glassco mentioned that Government whole concern is the economic value chain for human development, putting monies in the pockets of its people to meet their basic needs and also addressing food security for the larger population.  This the NaFAA Boss indicated that the approach remains to ensure sustainable fishing and reduction in post-harvest losses and spoilage.

She said in order to meet these objectives, the Government of Liberia, is well engaged with her partners to take action in keeping with international best practices, pointing out that today, the CDC led government is beginning several interventions in promoting sustainable, environmental friendly fishing and improved fish handling and processing techniques.

With funding from the World Bank, Madam Glassco declared government through NaFAA has brought in Liberia a huge consignment of Multifilament Nets or thread Nets to initiate the process of Nets Exchange for local fishermen. “This is one of the activities of the World Bank sponsored project, “Liberia Sustainable Management Fisheries Project” the NaFAA Fisheries Experts stated. She said that the rationale is to ensure that the destructive rubber nets or the monofilament nets which has over the years affected the marine ecosystem, causing environmental degradation as well as endangering other aquatic species, such as, sea turtle, sea horses and juvenile fish, through ingestion of this nets as food or by ghost fishing, to be replace with the internationally certified multifilament or thread net, in keeping with the New Fisheries Law of Liberia and international best practice.

Today, said she said “we are here to kick off this process as we anticipate that our fisher folks will give us their full support as was expressed during our just ended tour and awareness, let me assure you our fisher folks, that we as a government shall ensure a smooth and convenient transition considering all of the concerns raised during our just ended community engagement”.

Madam Glassco declared that “let it be known that the thread nets will be distributed to fishing communities in the nine coastal counties of Liberia, starting with Montserrado. She assured that about 20-30% of Liberia’s total fisheries workforce will be impacted through the first phase of this distribution scheme. She clarified that “it remains a voluntary process as we work with our fisher folks and other government functionaries to ensure a smooth transition to the new certified nets’.

Speaking of the compliance of all fisherfolks across the nine coastal Counties in Liberia, Madam Glassco pleaded, “we humbly appeal to our fishermen, who are currently using the rubber nets or the monofilament nets to cooperate with our teams in their communities and turn over all their rubber nets to NaFAA. ‘One rubber net for One Thread net, -Free of Charge’ NaFAA Boss mentioned.

The NaFAA DG said government through the Fisheries Authority is pleased to inform the fishing communities that, as it maximize our efforts to ensure sustainable fishing, NaFAA is also committed to harnessing the full economic value of the products from fishing, that is reducing post-harvest loss/ fish spoilage and improving quality, by introducing modern storage equipment, improved smoking techniques, through the establishment of smoke ovens  as well as upgrading the sanitary process with regards to fish handling, processing and distribution of fish products.

Mrs. Glassco disclosed that with funding support from the Japanese Government through FAO as the implementing partner, NaFAA is providing support to the Fish Mongers (women in fishing) to enhance the processing, handling and storing of fish products as well as distribution of the fish products.  Madam Glassco said the project is geared toward improving the livelihood of women in Fisheries across fishing communities.  “We are all aware that women play a crucial role in the fisheries value chain, as they are the channel for the fish – from the sea and to the plates”, the NaFAA Boss stated

Commenting on the significant role women or fishmongers play in the fisheries sector, particularly on food security and the economy, Director General Glassco assured that the current intervention will help increase their daily income towards the support of their families, the intervention will reduce post-harvest loss (fish spoilage) and increase the quantity and quality of fish product within our domestic market.

She continued today, NaFAA and FAO will launch the process for the distribution of fish handling, processing, storing and transportation equipment to the Women, as the project is the first of its kind in Liberia. She disclosed that items to be distributed to fishmongers will include, solar freezers, cutting tables, aprons, tricycles, other cutting utensils, protective and sanitary gears, such as gloves, head caps etc.

Speaking on the initial distribution, which is being launched today, madam Glassco said will benefit fish mongers in two fishing communities; Banjor in Montserrado and Fanti Town in Grand Bassa Counties and the subsequent project, which has already been signed, will extend the distribution to cover all fishing communities in the remaining coastal counties.

At the same time, the National Fisheries and Aquaculture Authority Director General added by stating that the Launching program toady is a clear manifestation that the Government of Liberia is diversifying the economy from the traditional rubber and minerals to other economically viable resources that has direct impact on the people. Madam Glassco noted that Government through NaFAA appreciate the support from its partners, the United Nations Food and Agriculture Organization, World Bank, the European Union and the Japanese Government, for their support towards the implementation of these projects.

She concluded by stating that NaFAA leadership appreciate the support from the Government of Liberia, especially the President, His Excellency Dr. George Manneh Weah and the Chief Patron of the Fisheries sector, Her Excellency Madam Clar Marie Decontee Weah for her continuous support and patronage in identifying with the fishing community thereby adding more relevance to the fishing sector as it is an unconventional and risky career. She recalled that as President Weah stated in his inaugural address, today in the fisheries, Liberian fisher folks are not spectators but rather the main players of this sector.

The First Lady who disclosed a planned construction of a modernize smoke oven facility for fishmongers/women in Fisheries in the Popo beach fishing community, mentioned that the land for the fisheries project has already been secured with all relevant documents.

The Liberian first lady pledged the full commitment of her husband President George Weah and noted that Liberian fisheries sector remains paramount on the agenda of the CDC leg government.

H. E. Clar Weah was seen presenting the deeds and other relevant documents to the president of the Fish Monger Association, Madam Theresa Beyon as a fulfilment of her promise to the association before peak of the COVID-19 virus in Liberia.

Meanwhile, the World Bank has assured the government and people of Liberia of its continued support for the country’s pro-poor Agenda for Prosperity and Development through the enhancement of the fisheries sector.

Mr. Khwima Nthara the World BanK Country Manager to Liberia, assured the fishing communities and fishermen of their continuous commitment towards the sector and also encouraged them to convert to the usage of internationally certified thread nets as provided for under the project which may have fish catches in a larger size, of better quality and more valuable.

Moreover, the United Nations Resident Coordinator to Liberia, during his speech unveil the fish handling and processing equipment which includes insulated/ ice fish boxes, fish filleting/ cutting tables, solar freezers, aprons, head caps , knifes amongst others to address challenges faced by women in Fisheries as it relates to preservation of fish products resulting in huge spoilage. He assured the government that with the support from funding partners such as Japanese government, this project will be extended to all fishing communities across Liberia

Also gracing the ceremony was Ambassador Laurent Delahousse, Head of European Union Delegation to Liberia. Making remarks on behalf of the EU, Ambassador Delahoussse praised government through NaFAA for exerting lot of effort towards ensuring a sustainable and safe marine environment of Liberia.

Concerned about the safety of the environment, Ambassador Delahousse identified plastic as another threat to the ocean, describing it as dangerous to human health.

The EU head of delegation used the occasion to call on fisher folks to see themselves as important part of the solution in shaping ocean governance in Liberia.

The Speaker of Liberia’s Legislature Dr. Bhofal Chambers thanked the partners for these intervention as it is a line with the President of Liberia Pro-poor Agenda for Prosperity and Development.