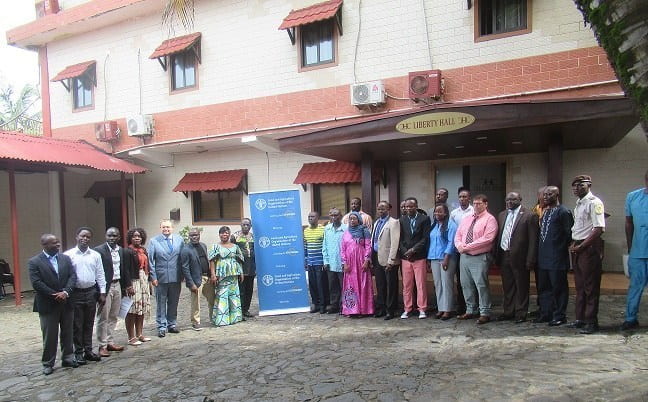 Liberia: Representatives from NaFAA, FAO, and LAFA posed for a photo (Credit: George A. Harris)

The National Fisheries and Aquaculture Authority of Liberia (NaFAA), the United Nations Food and Agriculture Organization (FAO) and local fisheries bodies on Monday, September 16, 2019, began a four-day workshop on the formulation of national strategy and action plan for compliance with 2009 FAO Agreement on Port State Measures (the PSMA) to prevent, deter and eliminate illegal, unreported and unregulated (IUU) Fishing.
The workshop is funded under the project “Support to implementation of the 2009 FAO Agreement on Port State Measures and the Voluntary Guidelines for Securing Sustainable Small-Scale Fisheries for Sustainable Fisheries and Maritime Security in the Gulf of Guinea”.
According to the workshop’s agenda, actors from NaFFA, FAO and local fisheries bodies including the Liberia Artisanal Fisheries Association (LAFA) action plan would be centered on issues including, national and regional level fisheries governance, port state measures against IUU,  and coastal and market state responsibilities.
FAO’s Country-Rep, Mariatou Njie says the goal of the project is to build the capacity of the governments of Liberia and Sierra Leone including fishery workers, private sector-actors and civil society organizations to improve sustainability of marine fisheries.
She says that IUU constitutes pressing problems that are subtracting significant economic and natural resources from victim countries.
“[IUU] effects can be severe, particularly for developing coastal states and non-high income small island states dependent on fisheries.
“Countries unable to fulfill international obligations for fisheries management and governance also risk incurring trade sanctions on their fisheries exports.” says Njie.
Additionally, Njie says the PSMA aims to prevent fish caught through IUU-fishing from entering national and international markets. She says that FAO is working with countries that have endorsed the PSMA to prevent foreign vessels engaged or believed to be engaged in IUU fishing.
She further that FAO  is also helping  countries in improving capabilities for the effective implementation of the provision of the Agreement and in formulating national strategies to fulfill the requirement set forth in the PSMA and related international instruments and regional mechanisms.
“These instruments include, Voluntary Guidelines for Flag State Performance, International Plan of Action to prevent, deter and eliminate IUU fishing, Voluntary Guidelines for Catch Documentation Schemes, Compliance Agreement and Voluntary Guidelines for the marking of fishing gear,” says Njie.
NaFAA Deputy Director General for Technical Services, William Y. Boeh, says that Liberia has lost US$70 million to IUU fishing from 2010 to 2016. He says Liberia endorsed the PSMA in June of this year making the country the eighth of 12 West African states to ratify the PSMA.
“The PSMA came into force in Liberia on 21st June 2019, making Liberia the 61st Party to have ratified the Agreement. Liberia is the eighth country from the 12 coastal countries of coastal countries of West Africa to ratify the PSMA,” says Boeh.
At the 60th Session (Rome, 18-23 November 2009) the FAO conference approved the 2009 Agreement on Port State Measures (the PSMA) to prevent, deter and eliminate IUU fishing, coupled with the effective implementation of complementary international instruments and regional mechanisms, which provides for a potent and cost effective global framework to combat IUU fishing.