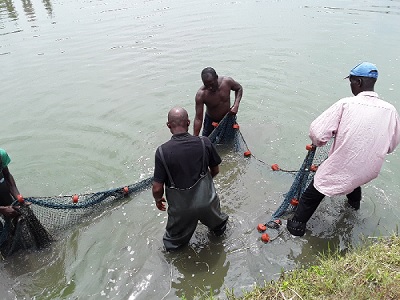 Ghana - The inmates harvesting the first stock of tilapia

Inmates at the James Camp Prison in Accra have harvested the first stock of an aquaculture initiative started in February this year.
The initiative is a pilot of the prison module under the Aquaculture for Food and Jobs Programme and the President’s Special Initiative Programme spearheaded by the Ministry of Fisheries and Aquaculture Development (MoFAD).
As part of the programme, MoFAD plans to roll out the initiative nationwide and ensure that each of the 26 prison establishments in the country is equipped with fish farming facilities to help in the rehabilitation of inmates.
In February 2019, the James Camp Prison received 1,600 tilapia fingerlings and 235 bags of fish feed from MoFAD after the ministry had helped the camp with a dug out fish pond.
Three months later, MoFAD further provided 3,000 fingerlings of catfish to the camp to boost its aquaculture activities.

After six months of growing the tilapia, the Minister of Fisheries and Aquaculture Development, Ms Elizabeth Afoley Quaye, and managers of the rehabilitation centre watched the inmates harvest the fish.

The catfish were still not ready for harvesting.
Yield
Amid virtual fanfare, the excited inmates — with their fishing net and the skill of experienced fisherfolk — made a bounty harvest of tilapia weighing an average of 300 grammes each.
In less than 30 minutes, they filled four medium-sized basins with their catch.

The catfish will be harvested in four months time.

Ms Afoley Quaye said she was happy that the initiative had yielded the needed results.
She said she was excited that the camp — as a correctional facility — had equipped the inmates with the needed skills to ensure their reformation and easy reintegrated into the society.
Equipping the inmates with skills in aquaculture, she said, would position them for life outside the prison and serve as a source of livelihood for them when they eventually left the facility.
Donation
Ms Afoley Quaye said the ministry would deliver on its promise to construct one of the newly improved fish smoking ovens — commonly known as the Ahoto oven — at the facility, with the support of the Ghana Export Promotions Authority, to help the prison to add value to some of the fish they produced before selling them on the market.
She said the ministry would also help the camp to build three more ponds and provide 2,000 fingerlings and 100 bags of fish feed to the inmates.
The minister later made a personal donation of GH¢10,000 to support the sachet water production facility currently under construction at the camp.
Training
About 12 inmates were selected for the initiative and went through the full hog of fish production, including pond construction, general management of fish ponds, water quality control, fish sampling, fish health, value addition, preservation management, fish processing, feed production, proper record keeping and evaluation.
A Deputy Director of Prisons (DDP) and the officer in charge of the James Camp Prison, Mrs Patience Baffoe Bonnie, said the aquaculture project at the camp had many benefits, including contributing to the national food basket and food security, helping to augment the protein and nutritional requirements of inmates and offering an opportunity to generate some income to support prison activities.

She said the inmates were also equipped with skills in carpentry, masonry, tailoring, shoe making and electrical works.

Mrs Baffoe Bonnie appealed to the public and corporate entities to support the Ghana Prisons Service with relevant equipment needed to facilitate the training of the inmates.