Ghana: Fishing at Shama slows down as illegal mining on Pra pollutes sea 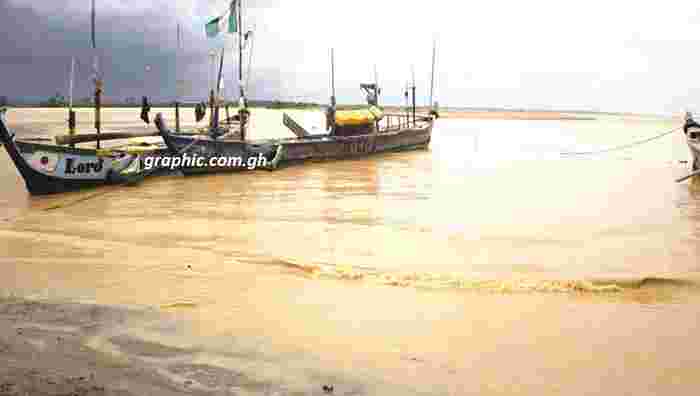 Illegal mining (galamsey) activities in the Pra River have affected fishing activities at Shama, a coastal town in the Western Region. The fish stock in the area is said to have also reduced.

This came to light during a visit to the fishing community by a group of journalists touring eight landing sites as part of a capacity-building programme sponsored by the United States Agency for International Development (USAID) and the University of Cape Coast Fisheries and Coastal Management Capacity-Building Support Project.
Muddy water
The estuary and part of the sea water has become muddy, making it impossible for the fishes to survive in the water.
According to the Chief Fisherman, Nana Enubasa, the water from the estuary used to be fresh and clean and served as a source of drinking water, “but now you cannot drink this water anymore”.
He also claimed that certain species, especially the smaller fishes, had become extinct.
“We no longer get them and as a result, it has even affected the catch for big fishes which fed on the smaller species,” he said.
A member of the Shama Unit Committee, Mr Francis Cobbinah, said tourists who used to visit the area regularly due to the clean beaches and estuary no longer found the area attractive.
“We don’t do galamsey in this area but when the estuary overflows, due to the operations of the illegal miners who mine in the Pra River in the upstream region, we at the downstream suffer the consequences,” Mr Cobbinah complained.
Support for campaign
Due to these serious effects on their livelihood, the fisherfolk at Shama have declared their support for the government’s clampdown on galamsey activities.
A member of the Canoe Owners Association, Nii Quaye, said: “We the residents of Shama appeal to the government to continue its fight against galamsey and eliminate the menace which has resulted in various consequences on the citizenry.”
He also called for the strict enforcement of the laws on fishing, as pertains in neighbouring countries such as Côte d’Ivoire and Togo.
“Enforcing the law is a major problem. We see many illegal fishing activities going on around us but no one is being sanctioned,” he complained.
In an interview, a 50-year-old fishmonger, Madam Sarah Abaka, said her trading activity was not as lucrative as it used to be when she started 25 years ago, due to the dwindling fish stock.
She also called on the government to intervene as a matter of urgency in order not to put them out of business.