Fishing Communities In Ghana To Benefit From Eco-Friendly Canoes 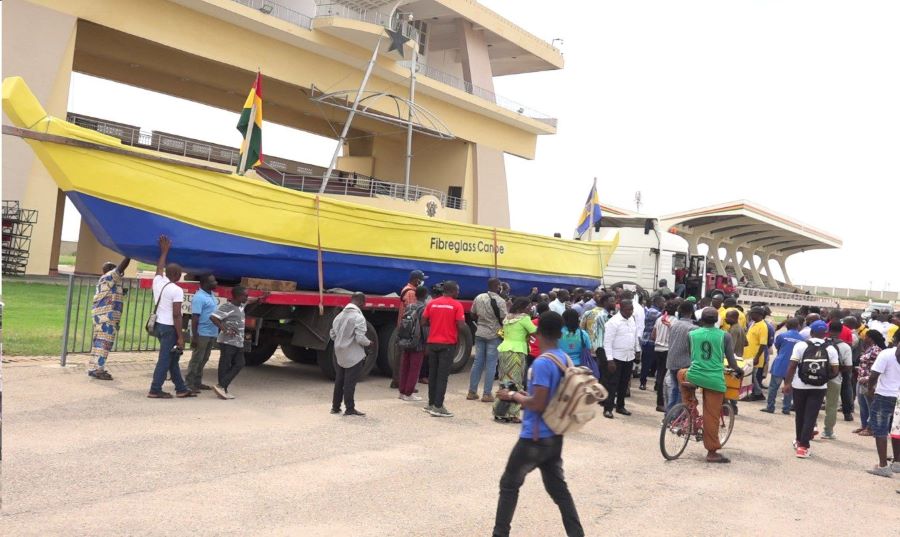 Twenty (20) fibreglass canoes are being distributed to fishermen along the four coastal regions of Ghana to promote sustainable fishing in the country.

With the capacity to accommodate more than 15 fishermen per canoe in one fishing expedition, the fibreglass canoes were produced to reduce the dependence on Ghana’s timber for canoe production.

Two of these canoes were out-doored at the maiden celebration of the Fish Festival in Accra where stakeholders within Ghana’s fisheries sector assembled to reflect on the industry and set objectives for the future.

The eco-friendly canoes form part of the government of Ghana’s fishing ports and landing sites projects, which is being supervised by the Ghana Ports and Harbours Authority, the state agency mandated to implement port projects.
The General Manager at the Tema Fishing Harbour, Ing. Kwabena Asamoah explained that this initiative forms part of GPHA’s sustainability drive.

He explained that because of environmental issues associated with using wood for canoes and fishing vessels, the sector thought it wise to introduce fibreglass canoes.

He acknowledged that the idea which was bought by the project manager led the GPHA to contribute to the success of the project by providing lands, especially at Takoradi, as one of the sites for the construction of the facility.
The Head of Projects at the company contracted to build these eco-friendly canoes, Meridian Logistics and Engineering, Eben Quao said these game-changing canoes are the future.

The Head of projects reiterated that the building of wooden canoes was one of the issues associated with deforestation. He stated that the introduction of new innovations like fiberglass canoes, steel boats and aluminium boats in the fishing sector will help curve the excessive felling of trees and preserve the forest regions.

“The old timber that we had, have all been depleted and the new ones we have are not of the best quality for fishing so most often than not, fishermen have to fetch water out of their canoes. Leakage is very prominent but with fiberglass canoes, maintenance is to the barest minimum,” he said.

Speaking during the opening ceremony of the Fish Festival, Minister for Fisheries and Aquaculture Development, Mavis Hawa Koomson intimated that government has embarked on a transformational agenda for the fisheries sector with many initiatives ongoing.

She emphasized that surveys on site suitability have been conducted for the 300 landing beaches along the coastal regions of the country and construction is in progress for 3 alternated premix fuel outlets at Elmina.