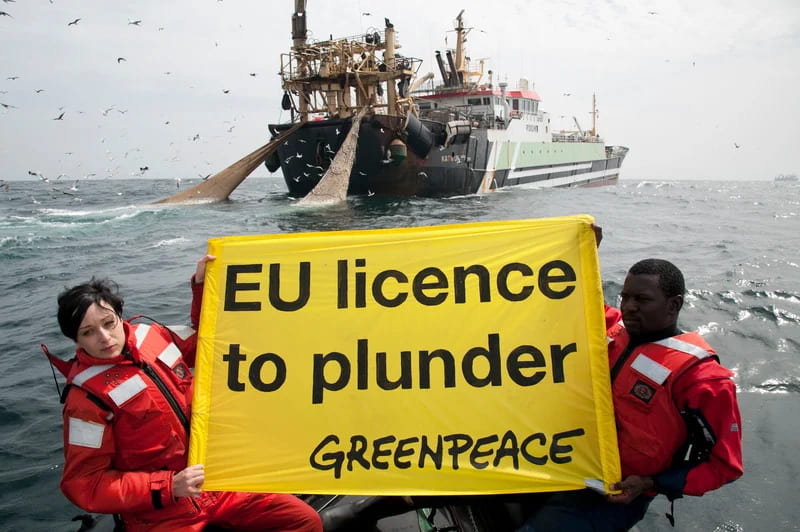 Dakar, November 18, 2020 – There are nearly 500 dead, and thousands of survivors on the high seas are young Senegalese who, at the risk of their lives, have been trying to reach Europe in recent months. A human tragedy continues to unfold. And as the tragedy makes news headlines, the fishing sector in Senegal is going through an unprecedented crisis – the Senegalese authorities have just renewed their fishing agreement with the European Union (EU).

As the EU begins to repatriate Senegalese migrants back to their land, it continues to exploit the country’s fishery resources, the scarcity of which is partly the cause of the despair of thousands of young Senegalese.

Greenpeace Africa calls on the EU and Senegalese authorities to address the real causes of this phenomenon in order to find a sustainable solution rather than allowing the situation to worsen by signing this agreement.

According to the communiqué of the European Union delegation in Dakar, the new fishing agreement will allow 45 European vessels to fish at least 10,000 tons of tuna and 1,750 tons of black hake per year for financial compensation of 15 million Euros (10 billion FCFA) over five years.

It is evident today that the poor management of the fishing resources in Senegal, the agreements signed and the fishing licenses granted to vessels of foreign origin are largely the cause of these resources’ scarcity.

Since 2014, Senegal and the EU have established a fishing agreement on tuna and hake fisheries, including by-catches. This agreement has been criticized by Senegal’s professional fishing organizations because it does not take into account the exploitable potential nor the state of exploitation of the resources.

The evaluation of this agreement, both at the technical level (quantity of fish caught by EU vessels) and at the financial level, has never been shared with the professional organizations. This is contrary to the States’ regulatory provisions and other commitments that make the involvement of the actors in the decision-making processes an important element of good governance of the resources. The United Nations Sustainable Development Goals, the Fishing Code and the Constitution of Senegal are, among others, clear on the need to integrate the fishing stakeholders in the decision-making process. But the reality is quite different.

Greenpeace Africa asks the Government of Senegal and the European Union to make a comprehensive and transparent evaluation of the previous agreement’s results, update the scientific data on fish stocks, and share this information with the fishing stakeholders for decision-making per the commitments made.

The guiding principle for the signing of a fisheries agreement should be based on at least two points: the state of the fishery resources concerned by the agreement and the capacity of the national fleet to exploit these resources. A fishing agreement should be signed based on the production surplus that corresponds to the fishing potential of stock that the national fleet is unable to fish.

A fishing agreement cannot be qualified as sustainable in the absence of a production surplus. The EU should ensure that the Government of Senegal has carried out the evaluation of the stocks concerned by this fishing agreement and that there is indeed a production surplus that the Senegalese fleet cannot exploit. And beyond these technical aspects, the economic and social dimensions should be taken into account. It is only under these conditions that the transparency and protection of resources claimed by the authorities of the EU and Senegal would be a reality.

Greenpeace Africa invites the Government of Senegal to freeze this fishing agreement, to make a transparent evaluation of the previous agreement, to share information with the actors and to take into account the situation of the stocks, the overcapacity of the national fleet and the despair of the fishermen before taking a decision. The market logic that motivates the European Union and the Senegalese authorities’ bad decisions will have serious consequences for the Senegalese and the Europeans because their destinies are closely linked.